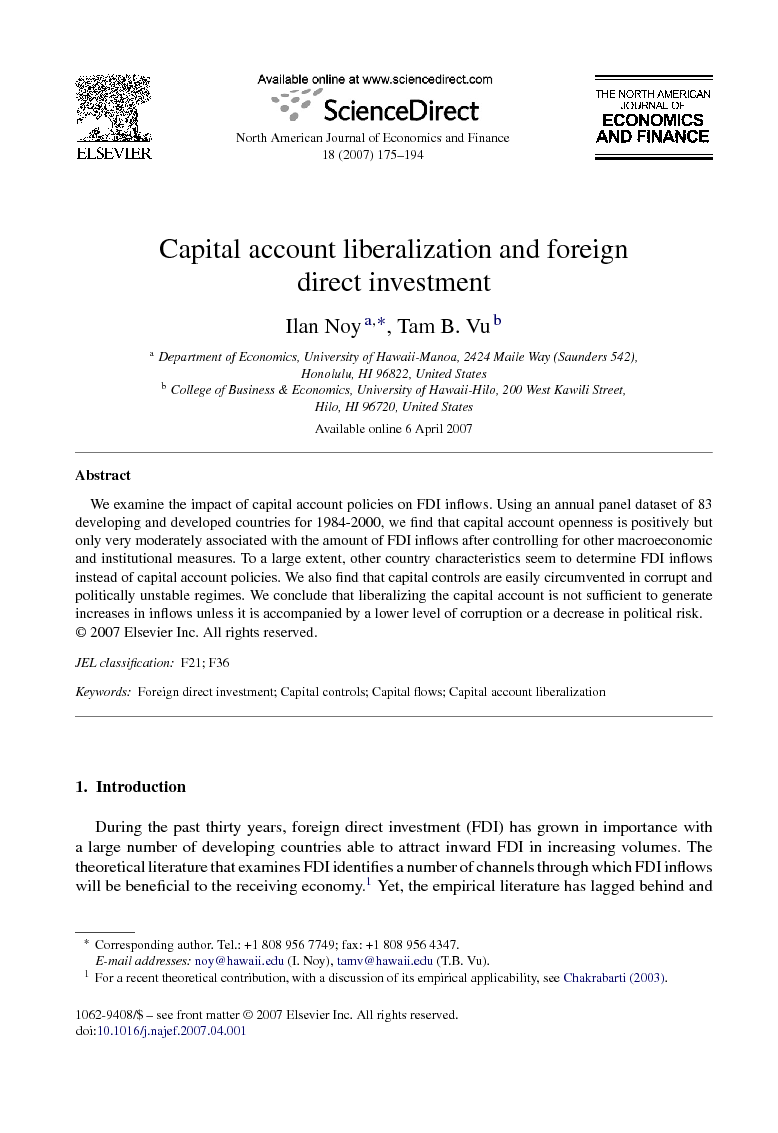 We examine the impact of capital account policies on FDI inflows. Using an annual panel dataset of 83 developing and developed countries for 1984-2000, we find that capital account openness is positively but only very moderately associated with the amount of FDI inflows after controlling for other macroeconomic and institutional measures. To a large extent, other country characteristics seem to determine FDI inflows instead of capital account policies. We also find that capital controls are easily circumvented in corrupt and politically unstable regimes. We conclude that liberalizing the capital account is not sufficient to generate increases in inflows unless it is accompanied by a lower level of corruption or a decrease in political risk.

During the past thirty years, foreign direct investment (FDI) has grown in importance with a large number of developing countries able to attract inward FDI in increasing volumes. The theoretical literature that examines FDI identifies a number of channels through which FDI inflows will be beneficial to the receiving economy.1 Yet, the empirical literature has lagged behind and has had more trouble identifying these advantages in practice. Most prominently, a large number of applied papers have looked at the FDI-growth nexus.2 The consensus that is slowly emerging is that FDI is beneficial when compared to other types of capital inflows such as portfolio investment or syndicated bank loans, though some maintain that even this beneficial effect is limited.3 Additional research efforts are devoted to identifying other features unique to FDI, such as its relative permanence or the positive externalities it generates.4 Notwithstanding these fragile conclusions, most countries continue to vigorously pursue policies aimed at encouraging more FDI inflows; these include very significant tax breaks and other types of subsidies granted to multinationals in return for setting up domestic operations.5 The multilateral public organizations, in particular the Organization for Economic Cooperation and Development (OECD), the World Trade Organization (WTO) and the International Monetary Fund (IMF), have also been vocal supporters of FDI promotion policies. One of the more common policies international institutions frequently prescribe within this context is liberalization of the capital account.6 Yet, very little empirical work has been done to examine the impact of capital account policies on FDI inflows. While neo-classical modeling suggests that capital account liberalization will increase FDI inflows, this might not be the case if the neo-classical assumptions of perfect information, a complete menu of contingent contracts, and competitive markets are relaxed. Developing countries, with their underdeveloped financial markets, lack of corporate transparency, insufficient national data-collection and dissemination, and susceptibility to large fluctuations in exchange rates—might be particularly vulnerable to perverse effects stemming from capital account liberalizations. In this paper, we aim to examine macroeconomic data to investigate the relationship between capital account policies and the inflows of foreign direct investment. Table 1 presents recent trends in FDI inflows both as a percentage of output and as a percentage of fixed capital formation. Apparent is the worldwide trend increase in the importance of FDI (using both measures) in all geographical regions throughout the 1980s and 1990s, with FDI inflows after 2000 increasing to 4-5 times the level experienced during the 1980s. Yet, in several regions, net FDI flows peaked in the 1995-1999 period, and current levels are still below that peak. For emerging markets Fig. 1 shows that, while 2001-2003 have indeed been years of decline, FDI flows into this group have soared again in 2004 and were predicted to continue soaring through 2006. Their level today is appreciably higher than during the previous peak in 2001.7 If these trends continue, an understanding of the determinants of foreign direct investment flows then only become still more important. Section 2 provides a brief survey of the extensive empirical work on the determinants of FDI inflows and of the very few papers that have looked at the nexus of FDI and capital account policies highlighting our contribution. Section 3 presents our empirical model and the data we use. Section 4 analyzes the results and Section 5 concludes.

Our basic finding from the benchmark model is clear and intuitive: the capital account openness measure is positively but moderately associated with the amount of FDI inflows after controlling for other macroeconomic and institutional measures. Yet, the clear-cut positive association between capital account openness and FDI inflows no longer holds once we control for the interactions with institutional quality and enforcement. Capital controls are easily circumvented in corrupt and politically unstable environments, and capital account liberalization will generate increases in FDI inflows only in environments with a lower level of corruption and political risk. Furthermore, our measure of capital controls examines the rules that govern capital flows that are ‘on the books’ (a de jure measure). It is plausible that the degree of enforcement of these regulations differs across countries and across time. We expect enforcement of these regulations to interact with the de jure measure in its impact on actual flows; though de jure rules might also have a separate impact since there is a degree of uncertainty with regard to future enforcement policy. While we tried to control for enforcement using institutional proxies, their correlation with actual enforcement is unclear. We believe more details on the intensity of rules may provide a more nuanced picture of the impact of regulations on de facto FDI inflows than one is able to discern using the cruder measures of capital controls that are generally used. Specific case studies that report on the impact of the exact regulations in place might shed more light on these questions. Clearly, the main drawback of this approach is a difficulty in discerning the general applicability of specific case studies.