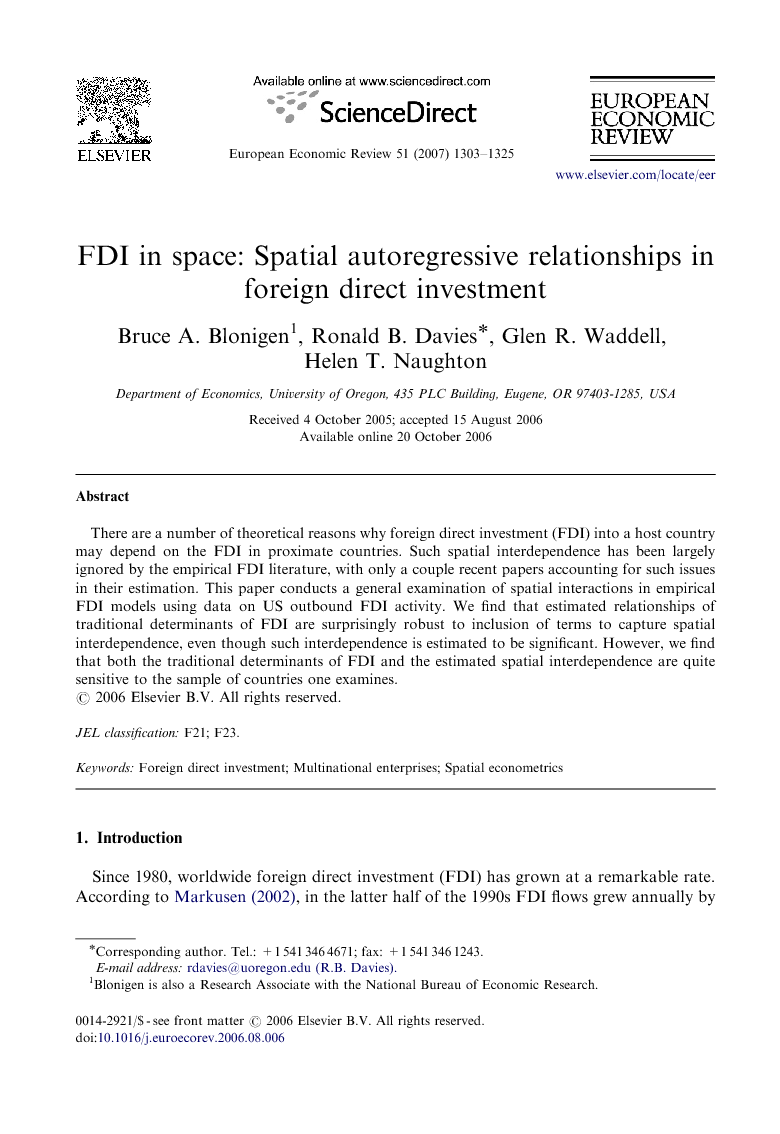 There are a number of theoretical reasons why FDI into a host country may depend on the FDI in proximate countries. Such spatial interdependence has been largely ignored by the empirical FDI literature with only a couple recent papers accounting for such issues in their estimation. This paper conducts a more general examination of spatial interactions in empirical FDI models using data on US outbound FDI activity. We find that estimated relationships of traditional determinants of FDI are surprisingly robust to inclusion of terms to capture spatial interdependence, even though such interdependence is estimated to be significant in the data. However, we find that both the traditional determinants of FDI and the estimated spatial interdependence are quite sensitive to the sample of countries one examines. In particular, the geographic scope of the sample and level of disaggregation are quite important in trying to separate evidence supporting different motivations for FDI. These general results are quite important for the extensive previous work on FDI. Omitted variable bias from not modeling spatial interdependence is apparently quite small in these cross-country FDI estimations across the variety of samples we explore. This is good news for the statistical inference drawn by previous empirical studies regarding determinants of FDI. On the other hand, it is worth noting that we find significant omitted variable bias for the market potential measure or spatial lag when not including both in the specification. This point is particularly applicable to the few previous studies of spatial effects in empirical FDI patterns, as ours is the first to include both spatial effects. Furthermore, our results highlight that estimates of cross-country determinants of FDI are not very robust to changing the sample of countries. In a related vein, the fragility of estimated spatial interdependence in the country-level data suggests that tying such results back to motivations of FDI is a difficult task and depends crucially on the sample chosen. This is a potential explanation for why the Baltagi et al. (forthcoming) study that pools data across a wide variety of countries and industries does not reach unambiguous conclusions. However, once we pursue estimation of sub-samples and disaggregate our data we find evidence suggestive of export-platform FDI for most industries within the developed European countries.