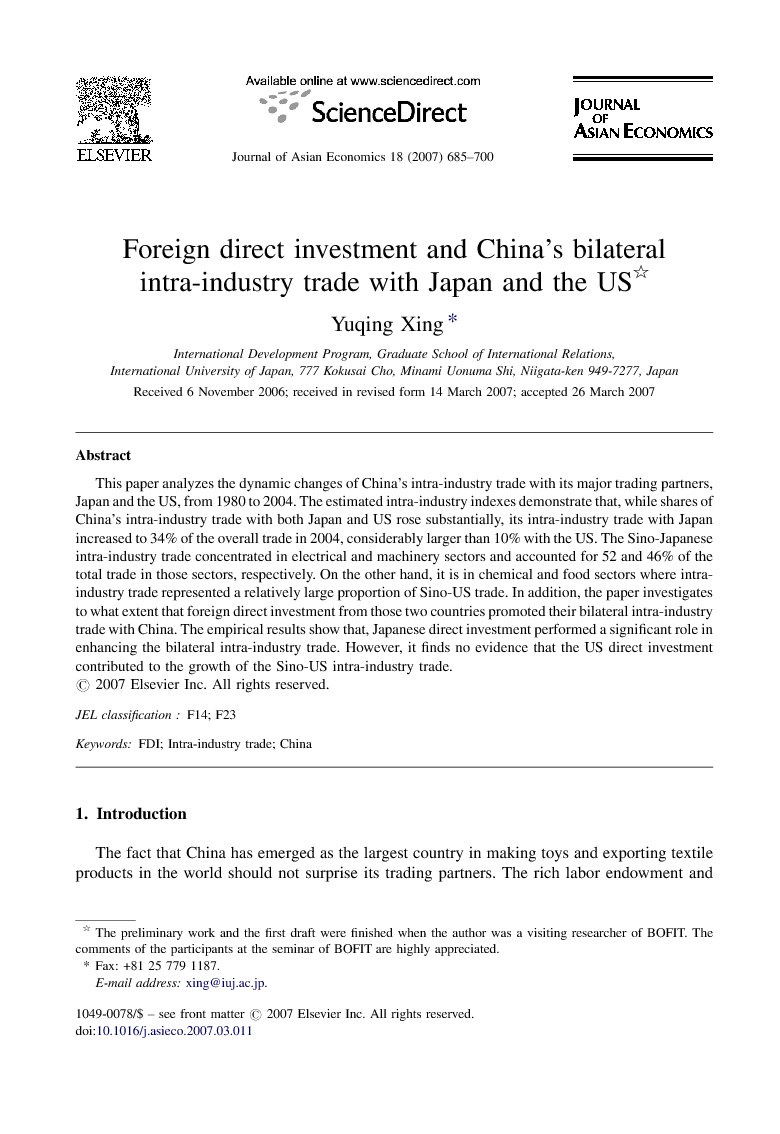 The fact that China has emerged as the largest country in making toys and exporting textile products in the world should not surprise its trading partners. The rich labor endowment and seemingly unlimited rural labors released from the agriculture sector grant China both comparative and absolute advantages in manufacturing labor-intensive products. As its economy is gradually integrated with the world economy, China has naturally evolved as a major exporter in almost all of the categories of labor-intensive products, such as shoes, travel gears, clothes, toys, etc. This phenomenon is exactly what the conventional Heckscher-Ohlin theorem predicts. If a country specialized in producing low value-added labor-intensive commodities forever, free trade would be a curse rather than a blessing for the country. That is actually one of the major suspicions that developing countries have on free trade. In the case of China, the economic integration with the global economy has not only greatly expanded the utilization of its abundant human resources and augmented its specialization in labor-intensive productions, but also facilitated the development of its manufacturing capacity into high value-added products, inducing fundamental changes in its trade structure. According to reports by China's MOC, 2003 and MOC, 2005, China's exports of high-tech goods have experienced rapid growth. In 2002, China exported $67 billion high-tech goods, ranging from computers, mobile phones, biotech products, to aerospace equipments. In 2004, high-tech exports more than doubled that of 2002; jumping to $166 billion (about 28% of China's total exports), representing a significant achievement in high-tech exports. A study released by the OECD (2006) on the global trade of information and communication technology (ICT) products, outlined an even more striking picture. It showed that China has not only been one of the largest ICT importing countries, but also one of the largest ICT exporters. It exported $180 billion ICT products in 2004, exceeding Japan, the European Union and United States; becoming the number one exporter of ICT products in the world. This paper attempts to analyze the changing trade pattern of China. The analysis focuses on the growth of intra-industry trade (IIT) between China and its major trading partners Japan and the US. IIT characterizes simultaneous imports and exports of goods under same industry classifications. Rising share of IIT indicates an increase in product varieties, improved economies of scales in production, and shortened technology gaps with competitors. Even if most of IIT belongs to vertical IIT (which covers simultaneous exchanges of goods in the same categories but different qualities), increased IIT in overall trade still marks the progresses in manufacturing capacity, expanded export capability, increased involvement in global production networks, and the transition in trade pattern. In addition, the paper examines factors contributing to the growth of IIT. Particular attention is given to foreign direct investment in China. It has been recognized that foreign invested firms are the major forces driving the fast expansion of China's exports. In 2004, they exported $339 billion, about 60% of China's exports (CSB, 2005). In the high-tech products category, foreign invested firms performed an even more important role. They produced about 88% of China's high-tech exports (MOC, 2006). Therefore, FDI not only boosted China's export growth, but also accelerated the transition of its exports from low value-added to high value-added products. Developing countries usually do not posses the necessary technology to produce high-tech goods. It is the multinational enterprises, which bring advanced technology and production know-how into developing countries with green-field FDI, consequently improving production capacities and product varieties of FDI host countries. Furthermore, technology spillovers associated with inflows of FDI also facilitate technological progresses of domestic firms, leading to improvements in production efficiency and product quality. Through alliances with MNEs, domestic firms of developing countries could take advantage of well-established global market distribution systems and recognized brands, which are critical for those firms marketing their products in the global market. A few empirical studies explored the relationship between FDI and China's IIT (e.g., Hu & Ma, 1999; Zhang, Witteloostuijn, & Zhou, 2005). Essentially, those studies are based on aggregated FDI and cross-country analysis. Effects of FDI on IIT however, depend largely on country as well as industry specific factors. For instance, domestic market oriented FDI usually function as substitutes of exports from FDI source to host countries. Inflows of domestic market oriented FDI reduce rather than raise bilateral trade between FDI source and host countries. In other words, such FDI contribute very little to the growth of IIT. As a matter of fact, the estimates show that, while one third of trade between China and Japan belongs to IIT, intra-industry trade accounted for only 10% of Sino-US trade, in spite of the fact that the US is China's largest trading partner and one of the largest FDI investors. Moreover, FDI in labor-intensive sectors such as textiles, where China has already specialized, generally intensify the specialization, thus mitigating the bilateral intra-industry trade between China and its trading partners, which are the sources of FDI in those sectors. For example, the estimated IIT indexes demonstrate that, in textile intra-industry trade accounted for only 7% of Sino-Japanese trade in the sector in 2004, less than half of that in 1980, despite the fact that China's textile sector is one of the largest hosts of Japanese FDI among all manufacturing sectors. This study investigates the dynamic development of the bilateral intra-industry trade between China and the US separately. It looks into the issue of major manufacturing sectors and applies sectoral FDI data, rather than aggregated one to explore the plausible impact of FDI on IIT. The remainder of the paper proceeds as follows. Section 2 provides a brief review on FDI and China's bilateral trade with Japan and the US, while Section 3 reviews the literature on the relationship between FDI and IIT. Section 4 estimates IIT indexes for overall trade; trade in manufacturing, as well as six major manufacturing sub-sectors from 1980 to 2004. Section 5 econometrically analyzes the impact of FDI on IIT. The analysis emphasizes the difference between Japanese and the US FDI in terms of how it affects their bilateral intra-industry trade with China. The final section summarizes major findings of the paper.

China has emerged as the third largest trading country in the world after two and half decades repaid economic development. Its trading pattern has also experienced substantial changes. Focusing on China's two largest trading partners Japan and the US, this paper analyzed the dynamic changes of China's bilateral intra-industry trade. As intra-industry trade means simultaneous imports and exports of goods under same product categories, an increase in IIT for a developing country, such as China, implies a progress in product varieties, improved economies of scales and reduced technology gaps with its trading partners. Further, it represents the dynamic changed of comparative advantages. Based on three digits SITC, the paper estimated IIT indexes of Sino-Japanese trade and Sino-US trade. The estimates demonstrate that, in 2004 the intra-industry between China and Japan accounted for more than one third of the overall trade between the two countries, a significant improvement compared with 5.6% in 1980. In some manufacturing sectors with largest presence of Japanese FDI, IIT actually represents more than half of the trade volume between China and Japan. For instance, in electrical, IIT emerged from zero to 52% by 2004. Similar rapid growth in IIT is also found in machinery, where IIT did not exist in 1980, but accounted for 46% of Sino-Japanese trade in the sector in 2004. In spite of the disparity in income and technological gapes between the two countries, intra-industry trade has emerged as an important form of the Sino-Japanese trade. However, the bilateral intra-industry trade between China and the US grew relatively slowly. In 2004, IIT between the two countries represented only 10% of the overall trade. For the manufacturing sectors as a whole, IIT accounted for only 15% of the total trade in the sector. Hence, inter-industry trade remains the major form of Sino-US bilateral trade, except for chemical, where IIT reached 50%. For exploring the factoring driving the growth of China's IIT with its two trading partners, this paper investigated to what extent FDI from Japan and the US contributed to the growth of China's bilateral IIT. The empirical results vary with respect to Japan and the US. In the case of Sino-Japanese trade, the empirical results shows that Japanese direct investment in China played a vital role in accelerating the bilateral intra-industry trade. It is one of the significant variables determining IIT in the Sino-Japanese manufacturing trade. On the other hand, in the case of Sino-US trade, the empirical analysis failed to find any evidence suggesting that the US FDI stimulated the growth of the Sino-US bilateral trade. Compared with Japanese FDI in China, relatively small scale of the US FDI in China may be one of the reasons responsible for the insignificant role in fostering IIT with China. Moreover, different strategies adopted by Japanese MNEs and the US MNEs are also one of the critical factors. Japanese FDI in China had been export-oriented, thus enhancing the bilateral IIT. The US FDI in China, however, had been market seeking, thus substituting the US exports to China. The contrasting roles performed by Japanese FDI and the US FDI imply that the impact of FDI on IIT depends on country specific factors and characteristics of FDI. The empirical findings of this paper also shed some light on the puzzle of the huge trade deficit between China and the US. The labor cost in Japan is at least as high as in the US. Despite this, Japan's trade deficit with China in 2005 was $29 billion (JETRO, 2006), less than 15% of the US trade deficit with China. The active involvements of Japanese MNEs in the Sino-Japanese trade, particularly the intra-firm trade between Japanese affiliates in China and their parent firms, contributed greatly to the growth Japanese exports to China, therefore mitigating the Japanese trade deficit with China.