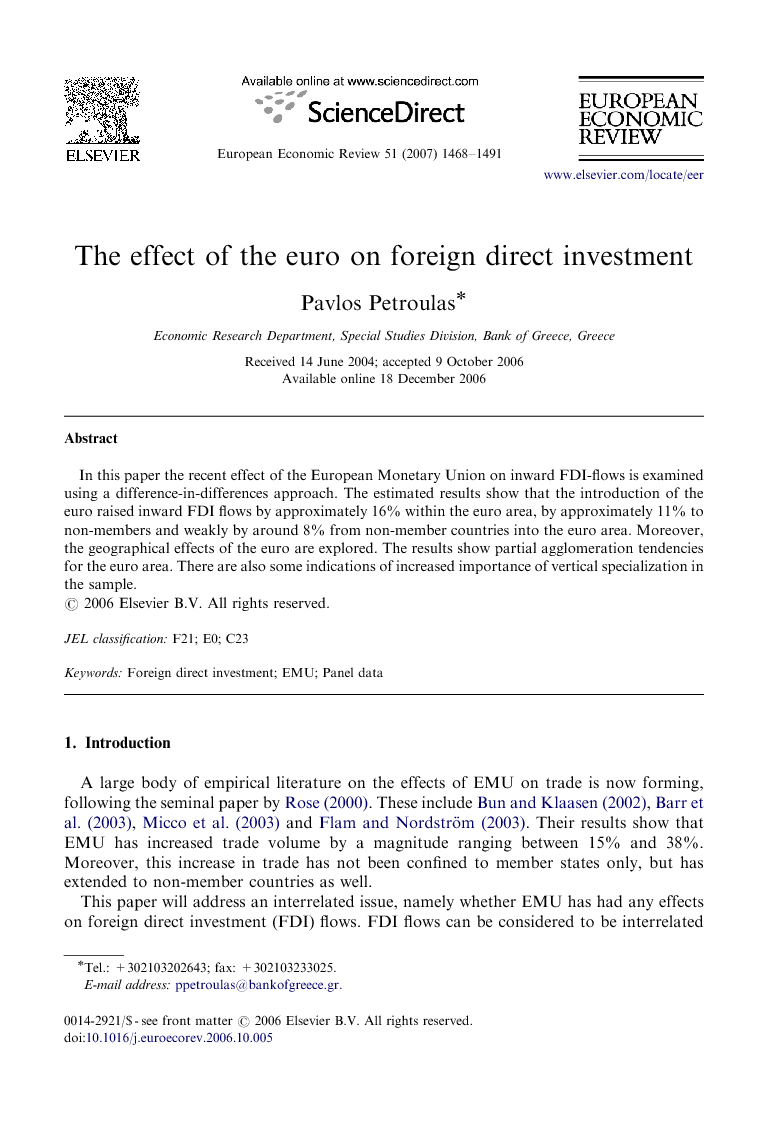 In this paper the recent effect of the European Monetary Union on inward FDI-flows is examined using a difference-in-differences approach. The estimated results show that the introduction of the euro raised inward FDI flows by approximately 16% within the euro area, by approximately 11% to non-members and weakly by around 8% from non-member countries into the euro area. Moreover, the geographical effects of the euro are explored. The results show partial agglomeration tendencies for the euro area. There are also some indications of increased importance of vertical specialization in the sample.

A large body of empirical literature on the effects of EMU on trade is now forming, following the seminal paper by Rose (2000). These include Bun and Klaasen (2002), Barr et al. (2003), Micco et al. (2003) and Flam and Nordström (2003). Their results show that EMU has increased trade volume by a magnitude ranging between 15% and 38%. Moreover, this increase in trade has not been confined to member states only, but has extended to non-member countries as well. This paper will address an interrelated issue, namely whether EMU has had any effects on foreign direct investment (FDI) flows. FDI flows can be considered to be interrelated with trade since, at least at the theoretical level, such flows are often viewed either as a substitute for trade (horizontal FDI) or as a complement to trade (vertical FDI). In addition, it can give an indication of whether EMU creates better conditions for firms making long-term investment decisions. One argument against floating currencies is that higher exchange rate variability creates uncertainty that discourages international investment and trade. Fixing the exchange rate eliminates this risk, hence encouraging international investment and trade, as well as making firms cost calculations and pricing decisions easier. Adopting a single currency is a very credible commitment to exchange rate stability and has the advantage of reducing transaction costs that would otherwise occur, irrespective of the degree of volatility. Both effects should promote international investment, i.e. FDI flows. In spite of the intuitive appeal of the argument that lower exchange rate volatility will increase FDI flows, empirical evidence regarding the effects of EMU on FDI flows, is currently absent.1 The approach of this paper is novel since little or no research, to my knowledge, has been devoted to appraising the effects of EMU on FDI flows. From a broader perspective, the recent economic and policy debate, concerning the economic effects of EMU on its member states, has been based on an increasing body of empirical evidence and this paper is an attempt to investigate yet another of the aspects of EMU. We use a new data set on FDI flows, a panel of unilateral FDI flows between 18 developed countries for the years 1992–2001. Since we are trying to uncover potential effects of an institutional reform, a difference-in-differences approach suitable for identifying such structural changes is used, to gauge the effects of EMU on inward FDI. The estimations are carried out within a partial equilibrium approach to FDI using a form of gravity regressions. The results of this study show that EMU increases inward FDI flows within the euro area by approximately 16%, inward FDI from member countries to non-members by approximately 11% and a weak increase in inward FDI from non-member countries to member countries of around 8%. These findings are robust to a number of measurement and specification issues. The remainder of this paper is organized as follows. In Section 2 some stylized facts and basic concepts concerning FDI are presented. Section 3 discusses the data, and Section 4 considers the empirical methodology. Section 5 presents the main results, whereas Section 6 deals with the robustness of these results. Section 7 combines trade and FDI data in order to examine potential economic geography effects of the euro. Section 8 concludes the paper.

Several theoretical arguments exist as to why the introduction of the euro should increase international investment. In this paper, a difference-in-differences approach has been used in order to gauge the impact of the introduction of the euro on inward FDI for the EMU members. After attempting to correct potential measurement problems and for various time effects in the data we estimate that the introduction of the euro has increased inward FDI by around 16% within the euro area. Moreover, the euro has had significant positive spillover effects on inward FDI both to and from the euro area by around 8% and 11%, respectively. The results are robust to both model specifications changes as well as changes in time and country sample, with one exception. If the central locations of Germany and BeLux are excluded simultaneously as both receivers of FDI and investors most of the euro effects disappear. However, if they are excluded either as receivers or investors the euro effects reappear indicating that the two countries act as a hub for FDI flows in the euro area. Finally, an investigation of the economic geography of the euro is conducted by combining the inward FDI results with results obtained from export regressions. The findings indicate that the increase in FDI is concentrated to large economies, while the increase in exports is larger for small economies. From this exercise there are also indications of an increase in vertical specialization or “third” country considerations in the sample. However, we do not feel that any specification does an excellent job at explaining the location of FDI, which raises some questions of relevance for future research. The first is directed to the question of whether alternative general equilibrium models such as Export-Platform FDI are more informative. Second, for policy issues, there will be a need to investigate whether “small” economies are increasingly acting as suppliers of input goods to multinational enterprises that, in turn, are increasingly located in “big” economies? If this is the case, it would be a natural step to investigate whether “small” economies are going to encounter a more volatile future in their production when exogenous shocks hit the EMU area due to this vertical specialization and the implied supplier status. Moreover, the question arises of whether such a development will impede further on the possibilities of “small” economies to pursue independent policies?