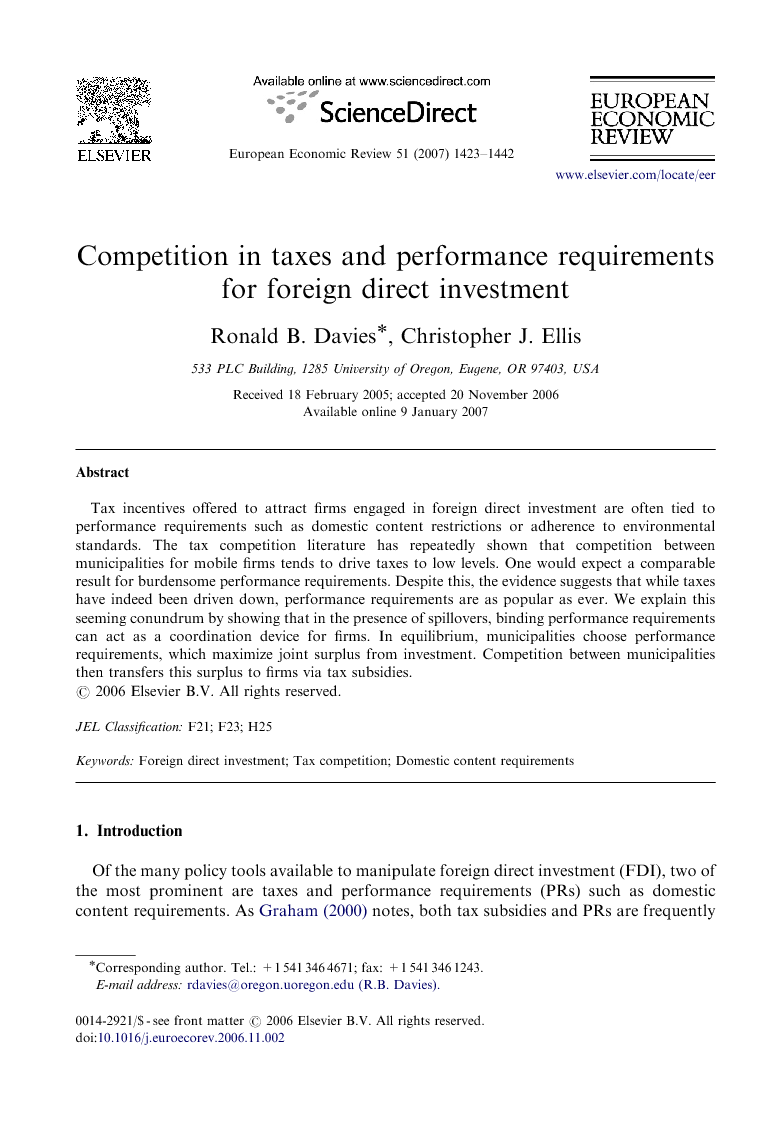 In the scramble for FDI, jurisdictions often compete by offering MNEs tax subsidies if they locate within their borders. Since firms find taxes burdensome, this can lead towards a race to the bottom in which large tax subsidies are offered. At the same time, however, jurisdictions link these subsidies to PRs such as domestic content restrictions. Since firms presumably find these restrictions burdensome as well, why these PRs are not competed away presents a mystery. We resolve this issue by demonstrating that PRs can play two important roles in the competition for FDI. First, locally set PRs act as a coordination device used by jurisdictions to maximize the gains from FDI, enhancing their ability to compete for FDI by offering more attractive tax subsidies. Because of this, such binding PRs are used as part of an equilibrium strategy even though a large part of the surplus may be extracted by firms through competitively set taxes. Additionally, in the absence of distributional concerns and inter-jurisdictional spillovers, such equilibria are efficient. Nevertheless, even when efficiency fails, the equilibrium use of binding PRs seems to be more likely than not. Second, the use of federally set PRs can act as a substitute for tax coordination. Because a federally set requirement affects the value of a firm to all jurisdictions, this can lower the bid, that is, increase the tax, of the losing jurisdictions. Thus, this second price manipulation can facilitate the retention of a larger proportion of the surpluses generated by FDI by the local jurisdictions. It is interesting to note that local PRs are designed to be purely surplus enhancing, while optimal national PRs can be designed to be surplus reducing as long as this carries a sufficiently large second price manipulation. There are two admitted limitations of our model. First, it is static. As found by King et al. (1993), when there are multiple periods and a firm can relocate, the firm may locate in an inefficient location because of the effect this has on bidding in the following round. As the authors note, this firm strategy does not work in a one-period model and therefore does not arise in the present context. However, it is not difficult to find situations in which PRs are used in a more complex dynamic setting even if the equilibrium is not fully efficient. Second, it assumes full information. It is perhaps more realistic to assume that firms have private information about the benefits they would generate in a given jurisdiction.20 In such a setting, PRs can assist governments in separating firms as well as coordinating them.21 In particular, with desirable and undesirable types of firms, using PRs to separate types can even be welfare improving. Thus, while we leave the details of such a model to future research, it is not difficult to imagine that even with private information binding PRs can exist as part of an equilibrium strategy. Despite these limitations, our results make two original contributions to the literature on competition for FDI. First, we have provided a rationale for why binding PRs continue to exist, and are not bid away in the competition to attract mobile capital. PRs can coordinate firms and increase the gains from FDI. This increase arises because PRs induce firms to internalize spillovers both between themselves and with the jurisdictions. Second, we have shown that federal PRs can be used as an indirect tax coordination device. By manipulating the tax packages that losing jurisdictions are able to offer federally set PRs allow winning jurisdictions to capture a greater share of the surplus generated by FDI.