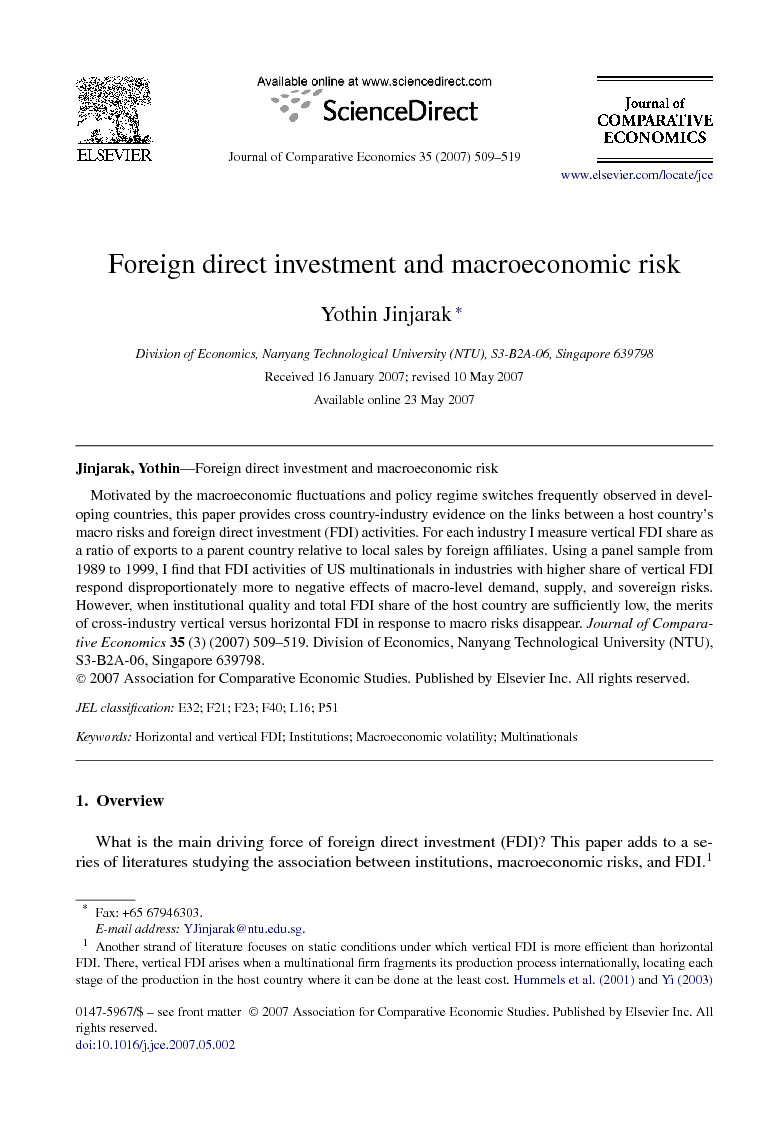 Motivated by the macroeconomic fluctuations and policy regime switches frequently observed in developing countries, this paper provides cross country-industry evidence on the links between a host country's macro risks and foreign direct investment (FDI) activities. For each industry I measure vertical FDI share as a ratio of exports to a parent country relative to local sales by foreign affiliates. Using a panel sample from 1989 to 1999, I find that FDI activities of US multinationals in industries with higher share of vertical FDI respond disproportionately more to negative effects of macro-level demand, supply, and sovereign risks. However, when institutional quality and total FDI share of the host country are sufficiently low, the merits of cross-industry vertical versus horizontal FDI in response to macro risks disappear. Journal of Comparative Economics35 (3) (2007) 509–519.

Interaction between contractual incompleteness and uncertainty plays a central role in the evaluation of the relative costs of governance through market-based bilateral contracts versus governance through internal organizations (Joskow, 2005). Assuming there is industry-specific uncertainty that drives vertical FDI, the results reported here can then be interpreted as increases in macroeconomic risks having stronger effects when the industry-specific uncertainty is small. In a longer sample, the estimation may also be exposed to multicollinearity as productivity shocks tend to account for the long-run movements in real exchange rate fluctuations by Balassa–Samuelson's (Alexius, 2005). Another reservation on the regression results is that the flow and stock of US FDI data can provide rough approximations to country distributions of FDI sources and destinations, but are poor approximations to industry distributions of FDI and to changes over time in country and industry distributions (Lipsey, 2007). While there is much at stake in eliminating macro risks, to understand the means to the end poses quite a challenge. Consider, for example, the supply risk. A negative association between the risk of labor strikes and FDI activity casts doubt on the welfare implication of centralized versus decentralized wage setting regimes (Leahy and Montagna, 2000). As for demand risk generated by the volatility of real exchange rates, a risk considered relatively easy to fix, choosing an exchange rate regime as a policy prescription to eliminate it may actually miss the target and is likely to be of second order importance to the development of good fiscal, financial, and monetary institutions (Calvo and Mishkin, 2003). At a broader level, we can consider the findings in this paper as a first attempt at understanding the role of policy coordination as countries try to attract new investments and extract benefits from market potential (Barrell and Pain, 1999 and Petroulas, in press). Hence, the three types of macro risks identified here can be considered as measurable stochastic attributes of structural and institutional inefficiencies facing policymakers. Of the 234 countries recognized by the United Nations,9 only a quarter attracts FDI from US multinationals. In our sample of 57 FDI destinations, those located below the 25th percentile of total FDI share have investment profiles that are one standard deviation riskier than those located above the 75th percentile. Contrasting destinations according to their total FDI share, vertical-versus-horizontal differential impact of macro risks turns out to not be applicable to smaller-share destinations, suggesting that FDI activity of both types are equally vulnerable to macro risks in countries with low institution qualities. When the institutional quality of a country is sufficiently low, US multinationals are hardly interested in direct foreign investment. Information from those countries with zero US FDI, however, may be useful for understanding international investment flows. Exploring this feature of the data, which is largely being ignored in current literature, is left for future works.10 For developing countries, consumer potentials, abundant natural resources, and labor cost advantages are all attractive for FDI (Hanson et al., 2002). On the other hand, developing countries are characterized by larger macroeconomic fluctuations and more frequent policy regime switches than industrial countries (Aguiar and Gopinath, 2007). That these stylized facts of macro risks across countries is a driving factor to the sensitivity of vertical versus horizontal FDI activity corroborates the institutional consideration of international allocation of resources. Much progress has been made on linking institutional analysis to international trade; Anderson and Marcouiller (2002), Berkowitz et al. (2006), Blomberg and Hess (2006), Greif (1992), Levchenko (in press), Marin and Schnitzer (2002), Nunn (2007), Rauch (1999), Rodrik et al. (2004), and Svaleryd and Vlachos (2005). As a corollary to cross-border trading in goods in the presence of institutional risks, multinationals likewise face a risk that their investment will be expropriated for the simple reason that international contracts are practically impossible to enforce (Thomas and Worral, 1993). Greaney (2003) proposes that the observed trade frictions between countries, such as the occasional US versus Japan row, are a result of asymmetric trade and investment flows that may stem from differences in the strength of business and social networks in international trade and FDI. On the empirical front, Aizenman and Spiegel (2006) find that institutional efficiency is positively associated with the ratio of subsequent foreign direct investment flows to both gross fixed capital formation and to private investment. As the theoretical and empirics of multinational firms are not as well developed as other areas of international economics, a combination of lessons drawn from international trade with comparative institutional analysis applying to FDI is a promising direction for future research.