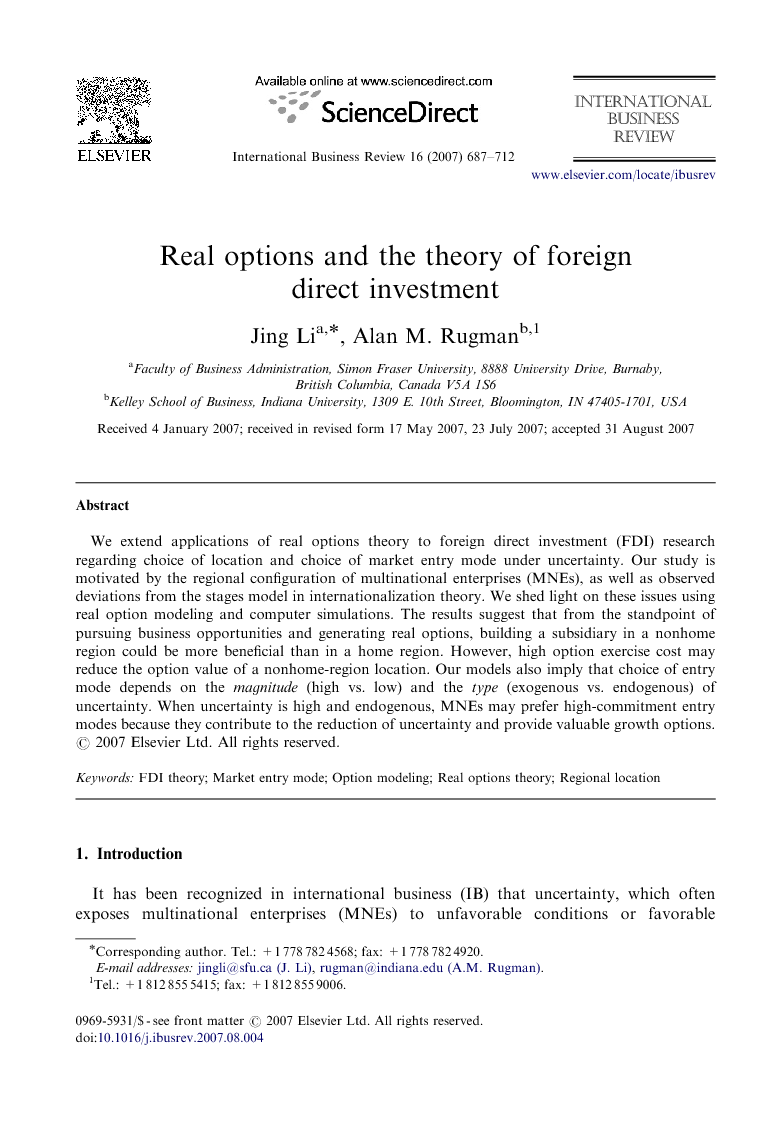 We extend applications of real options theory to foreign direct investment (FDI) research regarding choice of location and choice of market entry mode under uncertainty. Our study is motivated by the regional configuration of multinational enterprises (MNEs), as well as observed deviations from the stages model in internationalization theory. We shed light on these issues using real option modeling and computer simulations. The results suggest that from the standpoint of pursuing business opportunities and generating real options, building a subsidiary in a nonhome region could be more beneficial than in a home region. However, high option exercise cost may reduce the option value of a nonhome-region location. Our models also imply that choice of entry mode depends on the magnitude (high vs. low) and the type (exogenous vs. endogenous) of uncertainty. When uncertainty is high and endogenous, MNEs may prefer high-commitment entry modes because they contribute to the reduction of uncertainty and provide valuable growth options.

It has been recognized in international business (IB) that uncertainty, which often exposes multinational enterprises (MNEs) to unfavorable conditions or favorable opportunities, plays an important role in their strategic decision making. These challenges and opportunities in the international environment demand a theory, which helps to analyze MNEs’ strategies under uncertainty. Real options theory has enriched foreign direct investment (FDI) theory by introducing a new way of thinking—MNEs can strategically benefit from uncertainty because uncertainty is not only associated with downside risks but also with potential future opportunities (Li, 2007). To strategically benefit from uncertainty, MNEs need to create real options (such as the option to abandon and the option to grow) to maintain flexibility in adjusting decisions, as well as to exercise these options in response to opportunities or challenges. Real options theory, which effectively conceptualizes and quantifies the determinants of real options, has contributed to the development of theories in MNEs’ decision making under uncertainty (Buckley & Casson, 1998; Buckley, Casson, & Gulamhussen, 2002; Chi & McGuire, 1996; Kogut & Kulatilaka, 1994; Tong & Reuer, 2007). In this article, we further extend this stream of research by considering MNEs’ choice of location and choice of market entry mode under uncertainty. Since the 1970s, researchers in IB have devoted substantial efforts to analyzing investment behavior of multinational firms. IB researchers have recognized that “where” (choice of location) and “how” (choice of market entry mode) decisions are of primary importance for firms to consider in their foreign investment (Dunning (1980) and Dunning (2000)). Correspondingly, a bulk of research has theoretically and empirically examined the rationale for locational choice and the conditions under which market entry modes such as licensing, export, joint ventures (JVs), and wholly owned subsidiaries (WOSs) are optimal (e.g., Buckley & Casson (1976), Buckley & Casson (1996) and Buckley & Casson (1998); Dunning (1980) and Dunning (1998); Madhok, 1998; Rugman, 1981). However, the literature, mainly based on transaction cost economics, has not fully incorporated the role of uncertainty in influencing the where and how decisions of MNEs; in particular, it is not entirely clear how MNEs incorporate the option value of a location or a market entry mode in international investment decisions. Therefore, using real options theory, we intend to derive new insights in this regard. The first question we address in this study regards MNEs’ location choice between home and nonhome regions for market-seeking FDI, motivated by the empirical observation that most MNEs operate within their home regions of the NAFTA–EU–Asia triad by Rugman (2005) and Rugman and Verbeke (2004). Based on sales information of 380 MNEs among Fortune Global 500 companies, Rugman and Verbeke (2004) found that only 9 companies are adopting global strategies (defined as MNEs with sales of 20% or more in each of the three parts of the triad). Only 25 companies use bi-regional strategies (defined as MNEs with at least 20% of their sales in each of two regions in the triad, but less than 50% in any one region), while the majority of the companies—320 out of 380 MNEs—use a home region-oriented strategy (defined as MNEs with at least 50% of their sales in their home region). In this paper, we leverage real options theory to provide a theoretical explanation for this regionalization phenomenon. Using real options modeling, we suggest that from the standpoint of pursuing business opportunities and generating real options, building a subsidiary in a nonhome region could be more beneficial than in the home region. However, the option exercise cost is likely to be higher in a nonhome region, which may substantially reduce the nonhome region's option value and in turn the MNE's incentives to build subsidiaries outside its home region. Second, we enrich the application of real options theory to the IB literature on choice of market entry mode under uncertainty. There are two motivations for our study. The first originates from some debates in internationalization theory, which suggest that MNEs often adopt low-commitment entry modes, such as export, when uncertainty is high at an early stage of international expansion, and then use high-commitment entry modes, such as JVs and WOSs, when uncertainty is low at a later stage (Johanson & Vahlne, 1977). However, one can easily find exceptions to the staged path of expansion supported by internationalization theory (Buckley & Tse, 1996; Delios & Henisz, 2003; Fina & Rugman, 1996). For example, MNEs may adopt high-commitment entry modes such as JVs, even when they face high uncertainty about the business environment. In this paper, we utilize a real options approach to explain these inconsistent results. Our second motivation is from the literature review on applications of real options theory to IB; the existing literature emphasizes the option value presented by a JV (e.g., Buckley & Casson, 1998; Chi, 2000; Chi & McGuire, 1996; Tong & Reuer, & Peng, 2008) while underemphasizing the option value of export, licensing, or a WOS (a notable exception is Capel, 1992). In our model, we assume that these market entry modes all exhibit similar types of real options: the option to grow (spot and exploit market opportunities) and the option to abandon (spot market disadvantages and withdraw from the market). However, we emphasize that these market entry modes differ in their ability to obtain and realize the two types of options. We find that the option value of a market entry mode is contingent on the magnitude of uncertainty (high vs. low), as well as the types of uncertainty (endogenous vs. exogenous) that an MNE faces in a host country. Our results provide partial support for internationalization theory, as well as justify the validity of using high-commitment market entry modes, even under a high level of uncertainty. In this article, we begin by briefly reviewing the recent applications of real options theory to IB. Next, we introduce two simplified real options models, one for choice of location and the other for choice of market entry mode. The models in our study provide an example for IB researchers who are interested in utilizing the rapid advances in the modeling and solution techniques of real options theory. We then simulate the models and advance five propositions derived from the simulation. Finally, we conclude the paper and provide directions for future studies.

We extend applications of real options theory to enrich the FDI literature on choice of location and choice of market entry mode under uncertainty. Our simplified real options models provide an example to illustrate how to apply option pricing models to topics in IB. Specifically, by taking into consideration market volatility in IB, we have examined: (1) the conditions under which an multinational enterprises (MNE) prefers a location in its home region to that in a nonhome region for market-seeking FDI and (2) the conditions under which each market entry mode, such as export/licensing, a JV, or a WOS, is optimal. We find that MNEs are inclined to establish a subsidiary in their home region when they perceive fewer opportunities to generate real options in nonhome regions, or when MNEs have a lower capability of exercising real options in nonhome regions. These conclusions help to explain the recently emerging regionalization theory: MNEs tend to capitalize on opportunities in their home region, as far as customer-end activities are concerned, rather than engaging in a path of rapid “global roll out” of their products and services, as evidenced by the fact that the majority of Fortune Global 500 firms have at least 70% of their sales in their home regions (Rugman, 2005; Rugman & Verbeke, 2004). Our study also implies that those MNEs interested in globalization should carefully investigate the option exercise costs, such as location-specific adaptation investments, in nonhome regions. Such investments are critical to the MNE's ultimate economic performance in terms of market penetration and profitability. MNEs have to decide whether the option value in a particular location can offset the cost of the location-bound investments. Solely paying attention to market opportunities in a country is not sufficient to justify market entry of an MNE. The second contribution of this article is to provide insights into choice of market entry mode under uncertainty. The stages model of internationalization theory proposes that firms gradually increase commitments to foreign markets; firms often begin by exporting to a foreign market, then setting up a selling or distribution subsidiary, and finally forming a production subsidiary, such as a joint venture or a wholly owned subsidiary (Johanson & Vahlne, 1977; Sullivan & Bauerschmidt, 1990). However, one can easily find exceptions to the stages path of expansion supported by internationalization theory (Buckley & Tse, 1996; Delios & Henisz, 2003; Fina & Rugman, 1996). Our study suggests that the limitation of internationalization theory is partially due to its emphasis on only one dimension of uncertainty; that is, the magnitude of uncertainty. However, the theory ignores the other dimension of uncertainty—the type of uncertainty (exogenous vs. endogenous). Our results indicate that choice of market entry mode essentially depends on both the magnitude of uncertainty and the type of uncertainty. When uncertainty is high, firms are inclined to invest in low-commitment entry modes such as export/licensing because these modes provide valuable options to abandon. However, if uncertainty that an MNE faces is mainly endogenous, firms may change their decisions by investing in high-commitment market entry modes such as a JV or a WOS because such high-commitment entry modes are likely to provide valuable growth options, such as first mover advantages. Particularly, we find that, provided uncertainty that an MNE faces is high and endogenous, a JV is likely to be the optimal choice of entry mode because it provides the best combination of the option to abandon and the option to grow. Compared with export/licensing, using a JV provides the MNE with the opportunity to reduce endogenous uncertainty and obtain the growth option. Compared with a WOS, using a JV defers the initial large investment and thus exposes the MNE to less risk in the future. For future research, empirical studies are needed to examine the relationship between MNEs’ decision making, such as choice of location and market entry mode, and the magnitude and type of uncertainty. Since empirical studies based on a real options approach are limited in IB research (Li, 2007), such studies will make meaningful contributions to applications of real options theory to IB. The main challenge in the empirical studies is to obtain information on the magnitude and type of uncertainty. Since it is managers who generate and exercise real options in IB, their perceptions of the uncertainty may be an accurate measurement, which can be obtained through qualitative methods such as interviews or survey (Guiso & Parigi, 1999; Sanchez-Peinado & Pla-Barber, 2006).