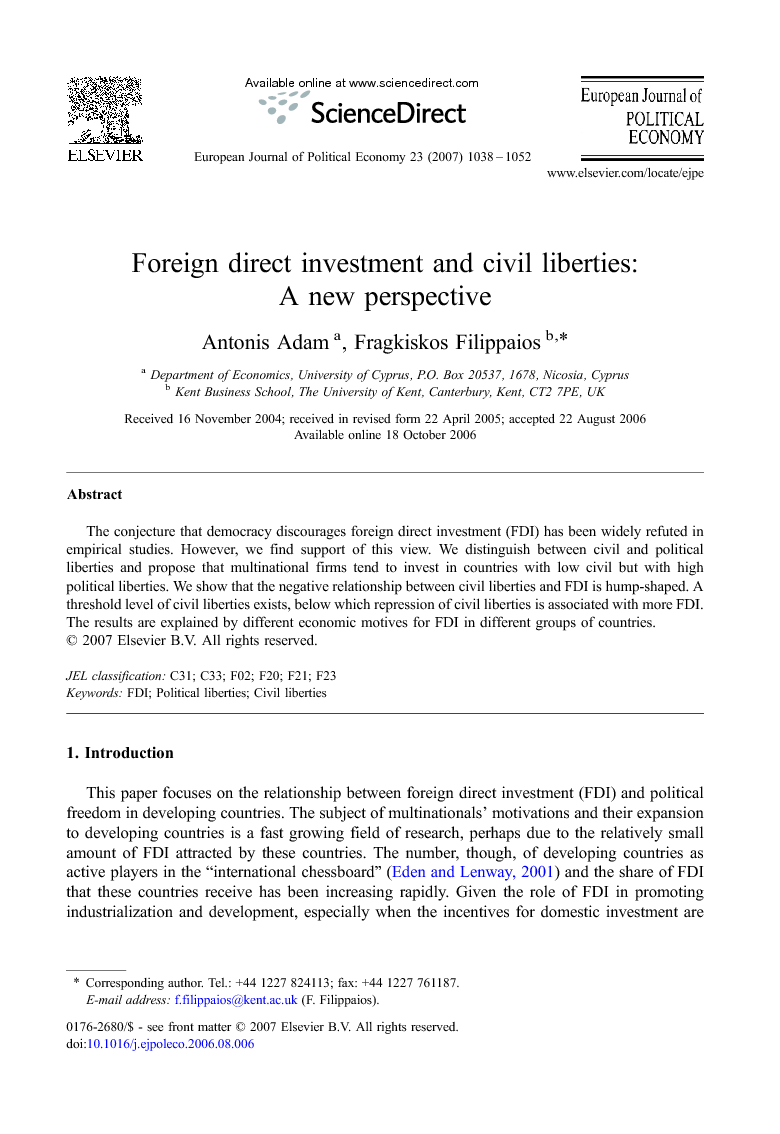 The conjecture that democracy discourages foreign direct investment (FDI) has been widely refuted in empirical studies. However, we find support of this view. We distinguish between civil and political liberties and propose that multinational firms tend to invest in countries with low civil but with high political liberties. We show that the negative relationship between civil liberties and FDI is hump-shaped. A threshold level of civil liberties exists, below which repression of civil liberties is associated with more FDI. The results are explained by different economic motives for FDI in different groups of countries.

This paper focuses on the relationship between foreign direct investment (FDI) and political freedom in developing countries. The subject of multinationals' motivations and their expansion to developing countries is a fast growing field of research, perhaps due to the relatively small amount of FDI attracted by these countries. The number, though, of developing countries as active players in the “international chessboard” (Eden and Lenway, 2001) and the share of FDI that these countries receive has been increasing rapidly. Given the role of FDI in promoting industrialization and development, especially when the incentives for domestic investment are weak, it is of interest to examine the role of the institutional and political environment in attracting FDI. In this respect, Rodrik (1996) is seminal in investigating the relation between democratic rights and FDI that originated in the US. His results support the hypothesis that countries with weaker democratic rights attract less US capital. His study is the first to give a clear answer to a debate that started with Huntington and Dominguez (1975) who claimed that autocratic rulers provide a better economic environment for both domestic and foreign investment since they are more able to enact efficiency-enhancing policies. However, Olson (1993) and McGuire and Olson (1996) suggest that there is risk of policy reversals in dictatorships and lack of credibility. Several subsequent studies have examined the relation between political and civil liberties and multinationals' motives and decisions. Greider (1998) and Meyer (1998) draw similar conclusions, with the first suggesting that FDI does not have a liberalising effect in autocratic countries and the second going a step further and supporting the conclusion that multinational enterprises (MNEs) are actually not only “robbing” developing nations of their economic sovereignty but also support repressive regimes. However, Harms and Ursprung (2002) do not find support for the argument that MNEs show a preference for undemocratic regimes. Instead they propose that more individual freedom attracts FDI. Busse (2004) confirms these results. The link between protection of democratic rights and FDI is verified for the whole period back to the early 1970s. There is also a tendency for MNEs, under the pressure of non-governmental organizations and due to the shift of FDI from primary sector to manufacturing and service activities, to direct investment towards countries that broaden the protection of political liberties. Li and Resnik (2003) find an indirect relationship between increased democracy and FDI inflows. Using a sample of 53 developing countries for the period 1982–1995, they report that, after controlling for the positive impact of democratic institutions on FDI through improvements on private property rights protection, the final impact is negative. This paper contributes to this discussion by considering the possibility that political and economic liberties influence investment decisions in different ways. Democracy is not a one-dimensional issue but may involve several other dimensions. For this reason one cannot treat political and civil liberties as perfect substitutes and simply measure democracy as an average or sum. We argue that, even though repression of civil liberties may give rise to an incentive for investment, repression of political liberties and non-democratic decision making can have the opposite effect. The second contribution of this paper is the blending of political economy with international business literature. We use arguments emerging from international business to explain MNE behaviour towards developing countries. The incentives of MNEs to invest in a foreign country in the form of FDI are quite diverse and the MNEs' preference towards more or less civil and political freedom repression may differ depending on the investment incentives. We argue that only when FDI is conducted in order to minimize cost, more civil liberties repression attracts more FDI. This effect, however, is not linear. A high degree of civil liberties repression may eventually deter FDI, whereas a low degree of civil repression may be an FDI-attracting factor. Moreover, our econometric results show that, in countries where civil liberties are repressed, FDI no longer involves minimizing the cost of production but aims predominantly at exploiting the natural resources of the economy. Therefore civil liberties repression does not affect the FDI decision. The paper is organized as follows: The next section presents the conceptual framework. Section 3 gives a brief description of the sample and data used. Empirical results are presented in Section 4. Section 5 concludes the paper, offering possible policy implications and extensions.

The main motivation of this study is the blending of international business and the political economy literature in explaining US MNE investment in developing countries. The motivations of MNEs for investing abroad may be quite distinct. Efficiency-seeking motives dominate the investment decisions in less liberal developing countries. The repression of the activities of the labour unions and interest groups drives this effect. In all other cases natural resource seeking and market-seeking, through the existence of prosperous elite, rule FDI decisions. From a normative point of view, the results presented here might be quite disturbing. FDI provides an important pool of investment in the process of the industrialisation of developing countries. As our results show, a particular type of FDI can be attracted from countries where the civil liberties are (slightly) repressed. Then developing countries may face a vicious dilemma: to choose between low economic well-being (low growth) and low political well-being (low civil liberties). Our paper proposes a way out of this dilemma. FDI does not come necessarily under the form of efficiency-seeking activities. A country, therefore, may attract FDI by promoting the abilities and the knowledge of its local labour force. This process can only be accomplished with sound educational and other public policies and with a reasonable amount of civil and economic liberties. The final answer to the above dilemma may be policies in favour of democracy and towards attracting FDI that is motivated by other than efficiency reasons.