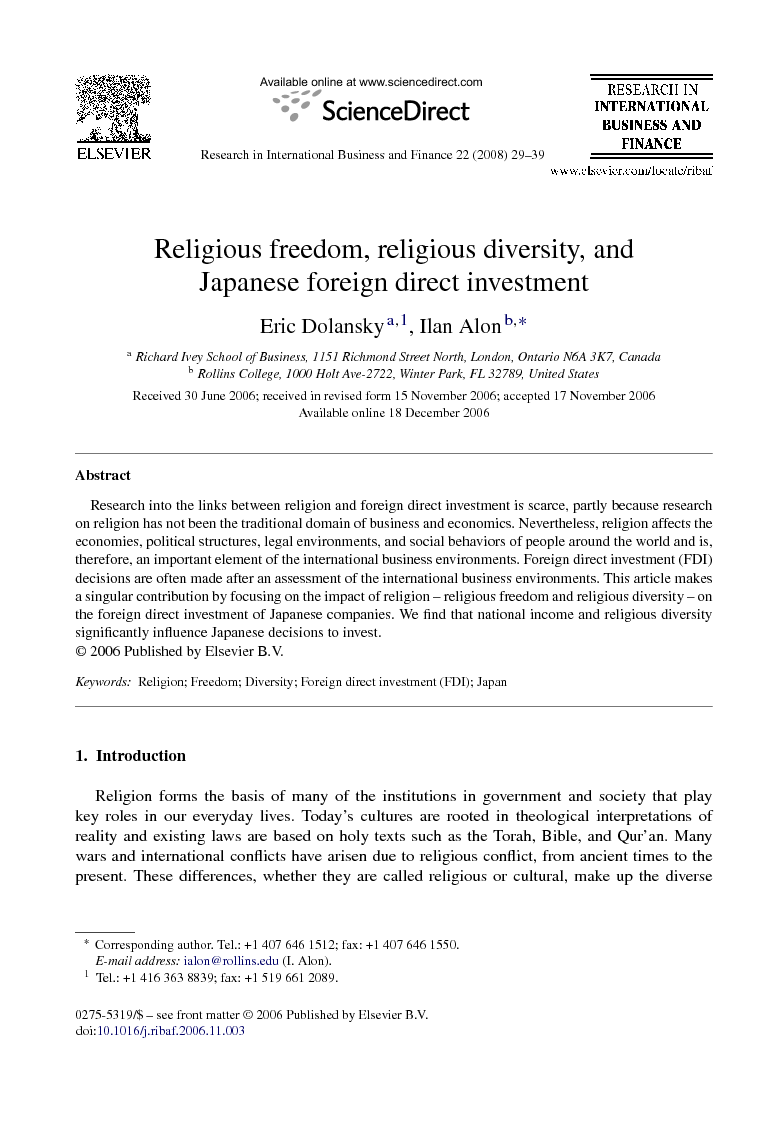 Research into the links between religion and foreign direct investment is scarce, partly because research on religion has not been the traditional domain of business and economics. Nevertheless, religion affects the economies, political structures, legal environments, and social behaviors of people around the world and is, therefore, an important element of the international business environments. Foreign direct investment (FDI) decisions are often made after an assessment of the international business environments. This article makes a singular contribution by focusing on the impact of religion – religious freedom and religious diversity – on the foreign direct investment of Japanese companies. We find that national income and religious diversity significantly influence Japanese decisions to invest.

Religion forms the basis of many of the institutions in government and society that play key roles in our everyday lives. Today's cultures are rooted in theological interpretations of reality and existing laws are based on holy texts such as the Torah, Bible, and Qur’an. Many wars and international conflicts have arisen due to religious conflict, from ancient times to the present. These differences, whether they are called religious or cultural, make up the diverse world. Weber (1930) postulated that religious beliefs and practices impact economic development, as it is through religion that many learn rules regarding honesty, integrity, and hard work. Lavoie and Chamlee-Wright (2000), while not studying religious freedom directly, alluded to it in reference to their investigation of culture and economic processes. They observed that religion has its basis in culture. The authors stated that economists often ignore the role of culture in favor of material and institutional conditions in analyses of economic prosperity. According to the authors more attention needs to be given to the “spiritual” realm of the economy, and other elements of culture, such as an “enterprising spirit.” Other researchers (e.g., Huntington, 1996, Landes, 1999 and Barro and McCleary, 2003) have also suggested that culture is a key antecedent to economic growth, and religion (its practice as well as its role in society, in terms of tolerance, freedom, and diversity) is a key component of culture. Johnson and Lenartowicz (1998), in a study of economic growth, considered a model with two measures of culture (developed by Hofstede) and an index of economic freedom; they found significant relationships between the variables. Easterly and Levine (1997), in a cross-country study of countries, examined the differences in countries with high levels of ethnic diversity (an element of the social environment related to religion). They found that ethnic-group polarization led to rent-seeking behavior and reduced the consensus of public goods, creating long-term reductions in economic growth. The present study contributes to the literature of religion and business by examining the impact of two religious variables, freedom and diversity, on the foreign direct investment of the Japanese. Because this relationship has not been directly explored to date, there is comparatively little literature with direct bearing on our topic. In the sections that follow we develop a rationale as to why religion should affect foreign direct investment and hypotheses relating religion-based variables to FDI, and, then, discuss the results and their implications. 1.1. Japan and foreign direct investment This paper utilizes the Toyo Keizai (TK) foreign direct investment database. This database is published by Toyo Keizei Incorporated, a market research firm based in Tokyo, Japan; the 2001 edition was used here. The data is compiled for publication through a mail and telephone survey of important public and private Japanese firms, regarding their foreign affiliates, along with some archival data. The use of this database limits the scope of the study to the behavior of Japanese firms, though we feel that these results are not atypical. Table 1 shows a profile of Japan in comparison to the United States (used as a comparison point due to its prominence). The other factor worth discussion is the religion of the Japanese, as this paper does concern the role of religion in investment decisions. Japan is an intriguing subject; 84% of the population espouses Buddhism and/or Shintoism as their major religion(s) (Wright, 2004). What makes this interesting is that 54% of Japanese practice both religions concurrently, an unusual circumstance compared with other peoples around the world. Typically, Buddhism and Shintoism exist peacefully together, which indicates a relatively high degree of religious tolerance in Japan; for this reason, it seems less likely that the Japanese would avoid investing in a country that practices a particular religion. Refusing to invest in countries that primarily practice a different religion would severely limit Japanese investment options, as Japan is the only country in the world with a significant number of Shinto practitioners, though Buddhism is more widespread throughout Southeast Asia.

This paper advances the idea that greater religious freedom and diversity will help attract more FDI. However, the empirical findings show that only religious diversity has an impact on FDI, and that impact is relatively smaller as compared to the size of the economy. A key policy implication is how malleable religious diversity is within a nation. It is not possible for a country to easily change its faith-based composition, just as it is not possible to change a country's history with regard to its judicial system (Beck et al., 2005). While our study indicates that there would be positive impact on FDI, the impact on other economic, political and social conditions can be quite different. For example, one might attempt to calculate the impact of liberal immigration policy that encourages religious diversity on, for example, social acceptance and tolerance towards the minority immigrant groups. There may be a threshold level above which religious diversity rises concomitantly with religious freedom. There is also a strong relationship between the existence of a state religion and religious diversity (Pearson correlation = − 0.573, p < 0.0005). The presence of a state religion deters the development of religious diversity. How might a change in the formal status of religion in politics affect religious diversity and foreign direct investment? It is possible that the non-significant findings regarding state religion may be due to measurement issues. Because the existence of a state religion does not necessarily mean religious repression (e.g. in Scandinavia) and its absence does not necessarily denote religious freedom (e.g. China, Cuba), state religion as a variable may not properly reflect religious liberalism. The curve might resemble an inverted U—the more committed a nation is to either having or not having a state religion, the more repressive it is likely to be; the more secondary in nature religion is to a country, the freer its people will be. Another interesting line of inquiry is religiosity and differences between faiths. Religiosity, the degree to which a person or population espouses religion, has been studied in various contexts (Barro and McCleary, 2003 and Kelley and De Graaf, 1997). While these studies propose interesting scales based on factors such as church attendance, beliefs, and diversity, no comprehensive measure of religiosity is prominent in the literature. The other concept, that of how different religions fare with regard to economic indicators, would be very interesting—do Western religions (Judaism, Christianity, Islam, etc.) fare better than do Eastern religions (Hinduism, Buddism, etc.), or are certain religions more/less attractive to foreign investors perhaps because they create political instability or promote a good work ethic? Future studies could examine these questions, once suitable scales are developed. This paper demonstrates a clear correlation and theorizes a specific link between religious diversity and FDI. This novel finding indicates that there is more to the foreign-investment decision than economic factors (law, finance, GNP); the attractiveness of a company or a host nation can also be based on social indicators and how the government addresses diversity of religion and tolerance of it.