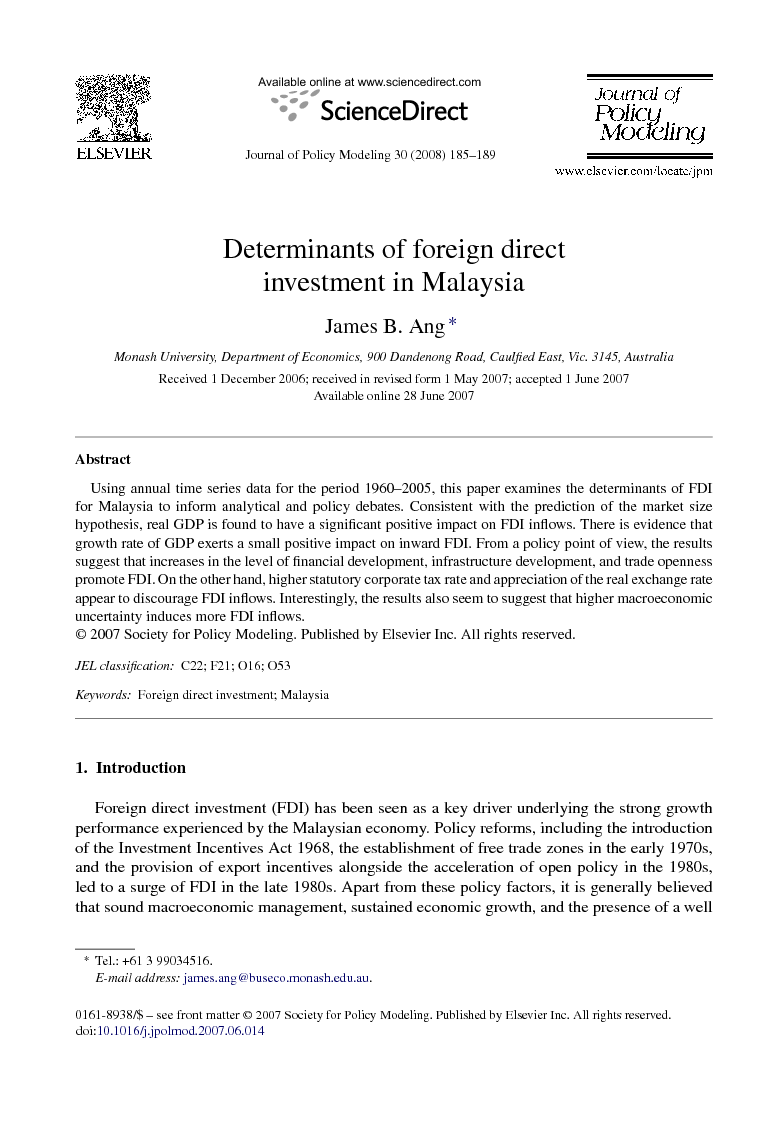 Using annual time series data for the period 1960–2005, this paper examines the determinants of FDI for Malaysia to inform analytical and policy debates. Consistent with the prediction of the market size hypothesis, real GDP is found to have a significant positive impact on FDI inflows. There is evidence that growth rate of GDP exerts a small positive impact on inward FDI. From a policy point of view, the results suggest that increases in the level of financial development, infrastructure development, and trade openness promote FDI. On the other hand, higher statutory corporate tax rate and appreciation of the real exchange rate appear to discourage FDI inflows. Interestingly, the results also seem to suggest that higher macroeconomic uncertainty induces more FDI inflows.

Foreign direct investment (FDI) has been seen as a key driver underlying the strong growth performance experienced by the Malaysian economy. Policy reforms, including the introduction of the Investment Incentives Act 1968, the establishment of free trade zones in the early 1970s, and the provision of export incentives alongside the acceleration of open policy in the 1980s, led to a surge of FDI in the late 1980s. Apart from these policy factors, it is generally believed that sound macroeconomic management, sustained economic growth, and the presence of a well functioning financial system have made Malaysia an attractive prospect for FDI. However, there has been a persistent decline in the ratio of FDI inflows to GDP since the early 1990s (Fig. 1). While this disappointing pattern of development has become a major concern of researchers and policy makers, there has been little attention paid to the understanding of what determines FDI in Malaysia.1 Hence, this warrants an investigation into what are the key forces that stimulate FDI in Malaysia.

The results in Table 1 show that higher financial development is associated with increased FDI, consistent with the findings of Deichmann, Karidis, and Sayek (2003). The analysis highlights that financial development acts as a mechanism in facilitating the adoption of new technologies in the domestic economy. Thus, the provision of efficient credit and financial services by the financial system may greatly facilitate technological transfer and induce spillover efficiency. Given that evolution of the financial system may affect the speed of technological accumulation and innovations, it is essential to develop a sound financial system in order to reap these efficiency gains and achieve sustained economic growth in the long run. To this end, appropriate financial sector reforms may help achieve this purpose (see Ang & McKibbin, 2007). The analysis suggests that increased size of the domestic market results in more FDI inflows due to the benefits of the economies of scale. Specifically, the results of Model C indicate that a 1% increase in real GDP would lead to about 0.95% increase in inward FDI, representing an almost one-to-one relationship. Using the Wald tests, the null hypothesis that the parameter on GDPt equals to one cannot be rejected at the 1% level. The result that a larger domestic market induces more FDI is in line with previous studies, including Wang and Swain (1995), Chakrabarti (2001) and Ramirez (2006). Investors are attracted to higher GDP growth rates of the Malaysian economy, although the long-run semi-elasticity of FDI with respect to GDP growth rate is found to be rather small in all models. The evidence suggests that strong economic growth remains a necessary condition for Malaysia to attract FDI inflows despite its effect is rather mild. The results are in line with the general findings of the literature, including Wang and Swain (1995), Billington (1999) and Choi (2003), which have consistently found a positive role of GDP growth rate. The evidence also points to the importance of developing the infrastructure base, a result that conforms to the general consensus (see Asiedu, 2002 and Deichmann et al., 2003). Infrastructure development carries a positive long-run elasticity of 0.355 in Model A and 0.519 in Model E, suggesting that the provision of an adequate infrastructure base is an effective tool for stimulating FDI inflows. The provision of infrastructural support could raise the productivity of capital, and expand the overall resource availability by increasing output. Trade openness contributes positively to FDI inflows, conforming to the theoretical arguments. Specifically, a one percentage point increase in trade openness would generate about a 1.094–1.323 percentage point increase in FDI inflows, based on the results of Model A and Model B. The findings are, by and large, in line with that of Chakrabarti (2001), Asiedu (2002) and Fedderke and Romm (2006). Hence, the results imply that greater liberalization of the trade sector may be conducive to inward FDI. The results are consistent with the proposition that a diminished currency value is associated with greater FDI inflows. This is because a depreciated currency value would lead to higher relative wealth position of foreign investors and hence lower the relative cost of capital. This allows foreign investors to make a significantly larger investment in terms of the domestic currency. A long-run negative semi-elasticity of greater than one is found in all models. The results support the findings of Azrak and Wynne (1995) and Ramirez (2006). FDI inflows react negatively to an increase in corporate tax rate. The results are in line with the argument that lowering corporate tax rate is an effective policy instrument to boost inward FDI. Similar results are also obtained by Billington (1999), Choi (2003) and Fedderke and Romm (2006). Currently, the corporate tax rate in Malaysia is 28%, higher than that of the East Asian tigers (Hong Kong, Singapore, South Korea and Taiwan). Clearly, there is a need for Malaysia to consider reducing corporate rate in order to foster international competitiveness. Interestingly, macroeconomic uncertainty seems to encourage inflows of FDI, against conventional findings. This is likely to be the case when foreign investors perceive a higher level of uncertainty as greater potential investment return. Hence, the results imply that the composition of FDI may have shifted towards more speculative type of foreign investment, which is not necessarily pro-growth in nature. Finally, the coefficient on D97–98 is found to be statistically insignificant, implying that the Asian financial crisis has no impact on FDI.