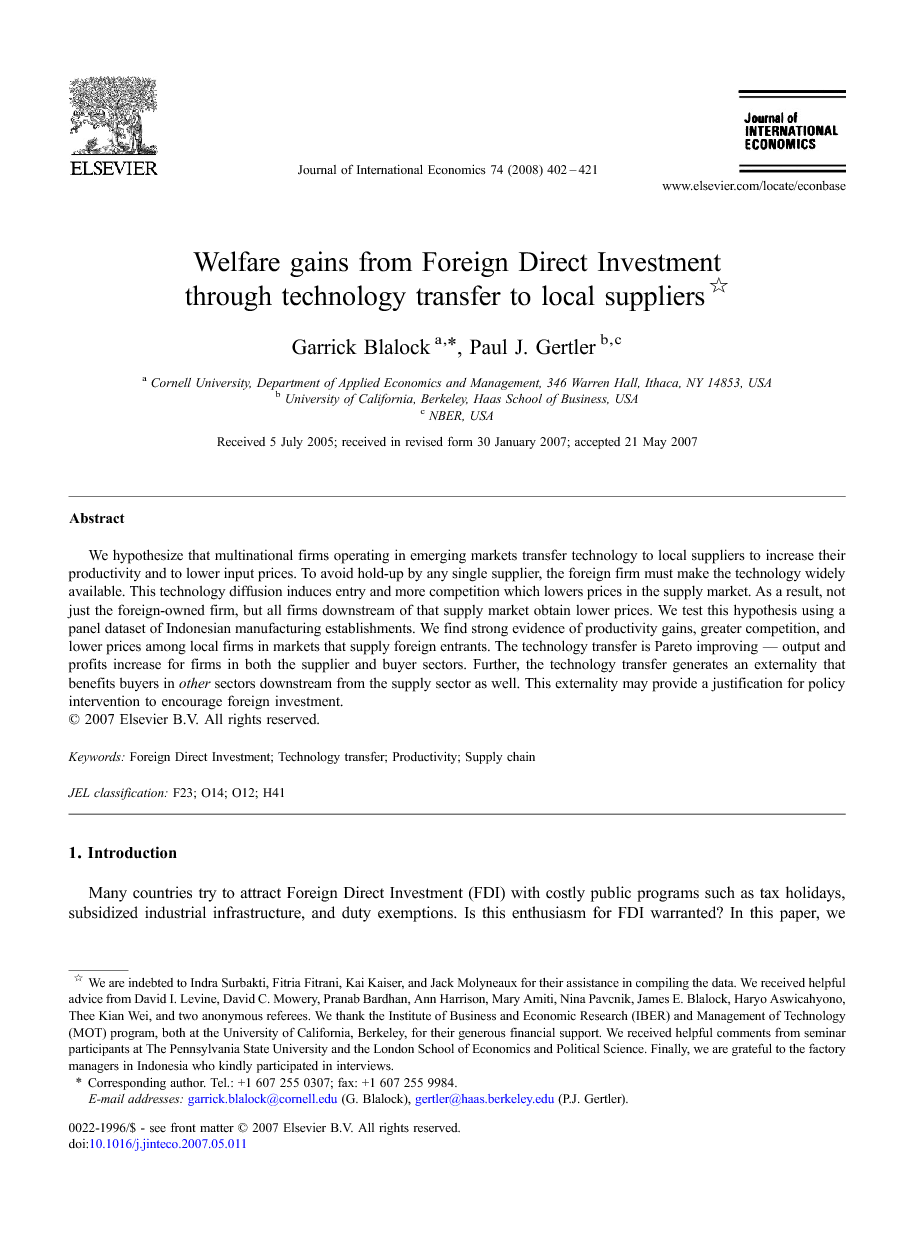 We hypothesize that multinational firms operating in emerging markets transfer technology to local suppliers to increase their productivity and to lower input prices. To avoid hold-up by any single supplier, the foreign firm must make the technology widely available. This technology diffusion induces entry and more competition which lowers prices in the supply market. As a result, not just the foreign-owned firm, but all firms downstream of that supply market obtain lower prices. We test this hypothesis using a panel dataset of Indonesian manufacturing establishments. We find strong evidence of productivity gains, greater competition, and lower prices among local firms in markets that supply foreign entrants. The technology transfer is Pareto improving — output and profits increase for firms in both the supplier and buyer sectors. Further, the technology transfer generates an externality that benefits buyers in other sectors downstream from the supply sector as well. This externality may provide a justification for policy intervention to encourage foreign investment.

Many countries try to attract Foreign Direct Investment (FDI) with costly public programs such as tax holidays, subsidized industrial infrastructure, and duty exemptions. Is this enthusiasm for FDI warranted? In this paper, we investigate the hypothesis that multinational firms transfer technology to their domestic suppliers and that this transfer generates greater competition and lower prices that benefit the entire economy. If true, the effect on competition may justify public encouragement of FDI. Recently, a number of authors have argued that that multinationals may deliberately transfer technology to local suppliers as part of a strategy to build efficient supply chains for overseas operations (Pack and Saggi, 2001, Blalock, 2002 and Javorcik, 2004). By transferring technology to local suppliers the downstream multinationals lower the cost of non-labor inputs. This cost-reduction motive implies that multinationals transfer technology to suppliers because it confers a private benefit to them. However, unless there is an additional social benefit, there is no case for public subsidies to stimulate technology transfers from multinationals. How might social benefits develop? The primary motivation for multinationals to transfer technology to suppliers is to enable higher quality inputs at lower prices. One problem with this strategy is that if the enabling technology is transferred to only one upstream vendor, then the multinational is vulnerable to hold-up. To mitigate hold-up risk, the multinational could diffuse the technology widely—either by direct transfer to additional firms or by encouraging spillover from the original recipient. Wide diffusion of the technology would then encourage entry into the supplier market, thereby increasing competition and lowering prices. However, the multinational cannot prevent the upstream suppliers from also selling to others in downstream markets. The lower input prices may induce entry and therefore more competition in downstream markets, which lowers prices and increases output. Pack and Saggi (2001) show that theoretically, as long as there is not too much entry, profits will rise in both the downstream and upstream markets. If so, the new surplus generated from increased productivity and the deadweight loss reduced from increased competition will be split between consumers and producers in a Pareto-improving distribution. In this paper we test the hypotheses that FDI leads to a Pareto-superior increase in welfare via these mechanisms. Specifically, we examine whether there were transfers of technology along the supply chain, whether the technology transfer leads to increased competition, and whether the increased competition induced welfare improvements in terms of lower prices, greater production, and higher profits in both the supply market and in industries downstream of the supply market. Our chief contribution is to establish and quantify the welfare enhancing externalities of vertical technology transfer. The analysis is in two parts. The first part measures the effect of FDI on local supplier productivity by estimating a production function using a rich panel dataset on local- and foreign-owned Indonesian manufacturing establishments. In a number of industries, the realized productivity gain is more than 2%. The second part of the paper examines the market and welfare effects of technology diffusion from FDI. We find that downstream FDI increases the output and profits of upstream firms, and decreases prices and concentration of upstream markets. We also find increased output and profits among downstream firms, and decreased prices and market concentration in markets downstream of markets supplying multinationals. In sum, our findings suggest several welfare effects—i.e., benefits for consumers in terms of lower prices and for firms in the form of greater profitability—transmitted both up and down the supply chain from the adoption of technology brought with FDI.

Our findings have two key implications. First, vertical supply chains are a conduit for technology transfer from FDI in emerging markets. Second, this technology generates welfare benefits that may warrant pubic policy intervention. The observation of technology transfer alone is insufficient to inform public policy. If the full benefit of FDI is internalized between the two private parties, then there is no need for government intervention. Our results suggest that FDI does indeed generate an externality–lower prices and greater output–that benefits suppliers, final goods makers, and consumers. Because the benefits of FDI to the economy exceed the private returns to both the multinational and its direct suppliers, the total amount of FDI may be less than the socially optimal amount without intervention. To gauge the magnitude of the welfare effect, we calculate a simple “back of the envelope” estimation of producer and consumer surplus gains resulting from FDI in Indonesia during the period of our panel. We can easily approximate producer surplus by using the estimation results of Eq. (7) to calculate the effect of FDI on our proxy for profit. If we assume a linear demand curve, we can obtain a rough estimate of consumer surplus as (p1988 − p1996) ⁎q1988 + .5(q1996 − q1988) ⁎ (p1996 − p1988). The 1988 price and quantity are in the data and we can forecast the effect of FDI on the 1996 values by using the results of Eqs. (5) and (6). Our simple calculations show that producer surplus increased by 1.1% in intermediate goods industries and by 0.7% in final goods industries. We find a consumer surplus increase of 5.8% relative to total sales in final goods industries. Although only rough approximations, the producer and consumer surplus measures are economically substantial. On the basis of the outcomes we have observed, we conclude that host economy policymakers should, at a minimum, not raise barriers to FDI. In cases where there is potential for multinationals to source supplies from local suppliers, policymakers should consider providing incentives to encourage FDI.