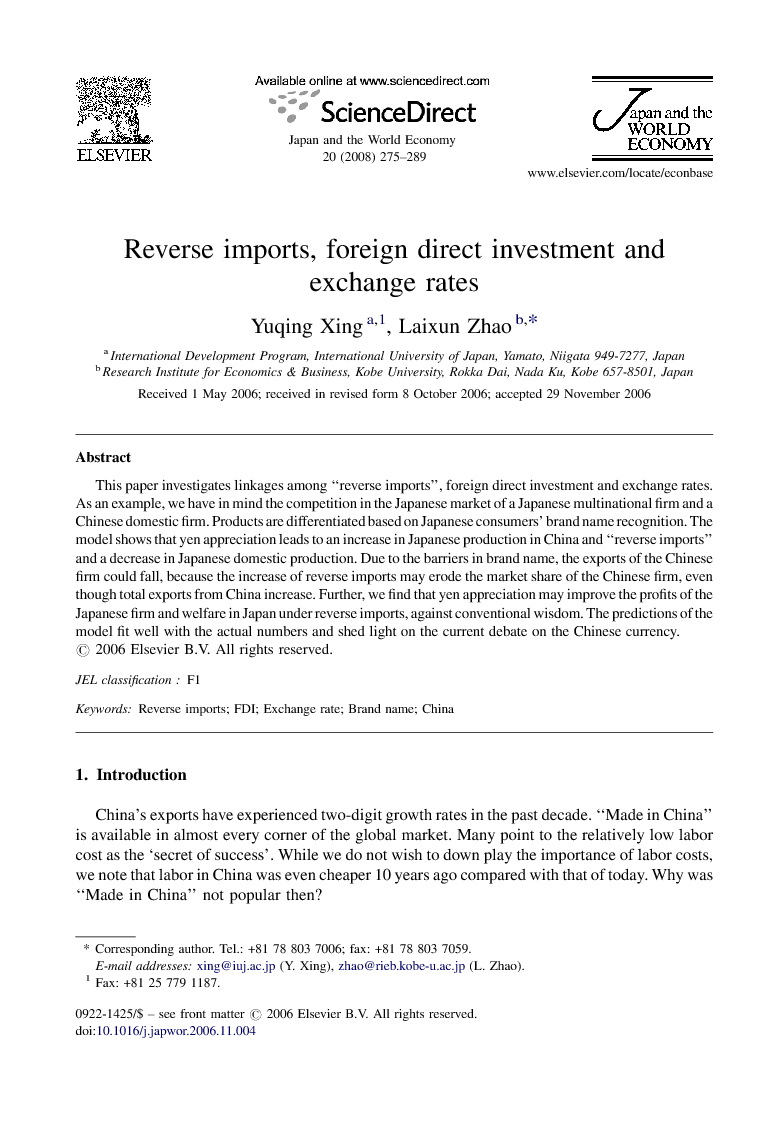 This paper investigates linkages among “reverse imports”, foreign direct investment and exchange rates. As an example, we have in mind the competition in the Japanese market of a Japanese multinational firm and a Chinese domestic firm. Products are differentiated based on Japanese consumers’ brand name recognition. The model shows that yen appreciation leads to an increase in Japanese production in China and “reverse imports” and a decrease in Japanese domestic production. Due to the barriers in brand name, the exports of the Chinese firm could fall, because the increase of reverse imports may erode the market share of the Chinese firm, even though total exports from China increase. Further, we find that yen appreciation may improve the profits of the Japanese firm and welfare in Japan under reverse imports, against conventional wisdom. The predictions of the model fit well with the actual numbers and shed light on the current debate on the Chinese currency.

This paper assumed a structure in which a Japanese MNE produces in both Japan and China and engages in reverse imports from its Chinese affiliate, and a Chinese firm competes with the Japanese firm. We investigated the conditions for reverse imports to arise, and found that exchange rate changes, wage and capital cost differentials and barriers in brand name recognition contribute to increases in Japanese overseas production and reverse imports. The model could shed light on the current China debate. One of the most important markets for Japanese affiliates in China is Japan itself. Yen appreciation raises the relative production cost in Japan, driving production to low cost countries through FDI and importing back for serving the Japanese domestic market. The model showed that due to the barriers in brand name recognition, it is uncertain whether the exports of the Chinese firm rise or not when the yuan depreciates against the yen. It is likely that the growth of reverse imports erodes the market share of Chinese firm. In other words, Chinese firms could be a loser of yen appreciation, due to the strong competition of reverse imports by Japanese MNEs. The predictions of the model fit well with the actual data. Depending on product differentiability, yen appreciation may improve profits of the Japanese firm and welfare in Japan under reverse imports. One might argue that even though Japanese welfare increases under reverse imports, Japanese employment may fall because the MNE shifts production to China. We conjecture that the gain from reverse imports may be smaller taking consideration of unemployment assistance and training. We have assumed that firms compete in quantity with differentiated products. They could also compete in prices. It is well known that prices are lower and outputs higher under price competition than under quantity competition (see for instance, Cheng, 1985). Also, a quasi-linear utility function (which generates linear demand functions) has been assumed. More complicated demand and utility functions will give more variations. In addition, sales in China were assumed to be zero for simplicity. If we allow positive sales in China, as long as there is market segmentation, our analysis on reverse imports, FDI and the exchange rate remains robust. We have investigated the impact of exchange rate changes. The mechanism is the same if wages or other production costs increase in China. Further, commercial policy such as tariffs can be incorporated into the model. Increases in import tariffs cause similar effects as currency depreciation in Japan. In particular, in the presence of reverse imports, an increase in the import tariff might hurt domestic firms with overseas subsidiaries. This implies that the optimal tariff is lower than in the absence of reverse imports. Finally, production in the present model consists of one stage only. The analysis becomes more complicated in a structure with both intermediate and final productions. This remains a fruitful avenue for further research.