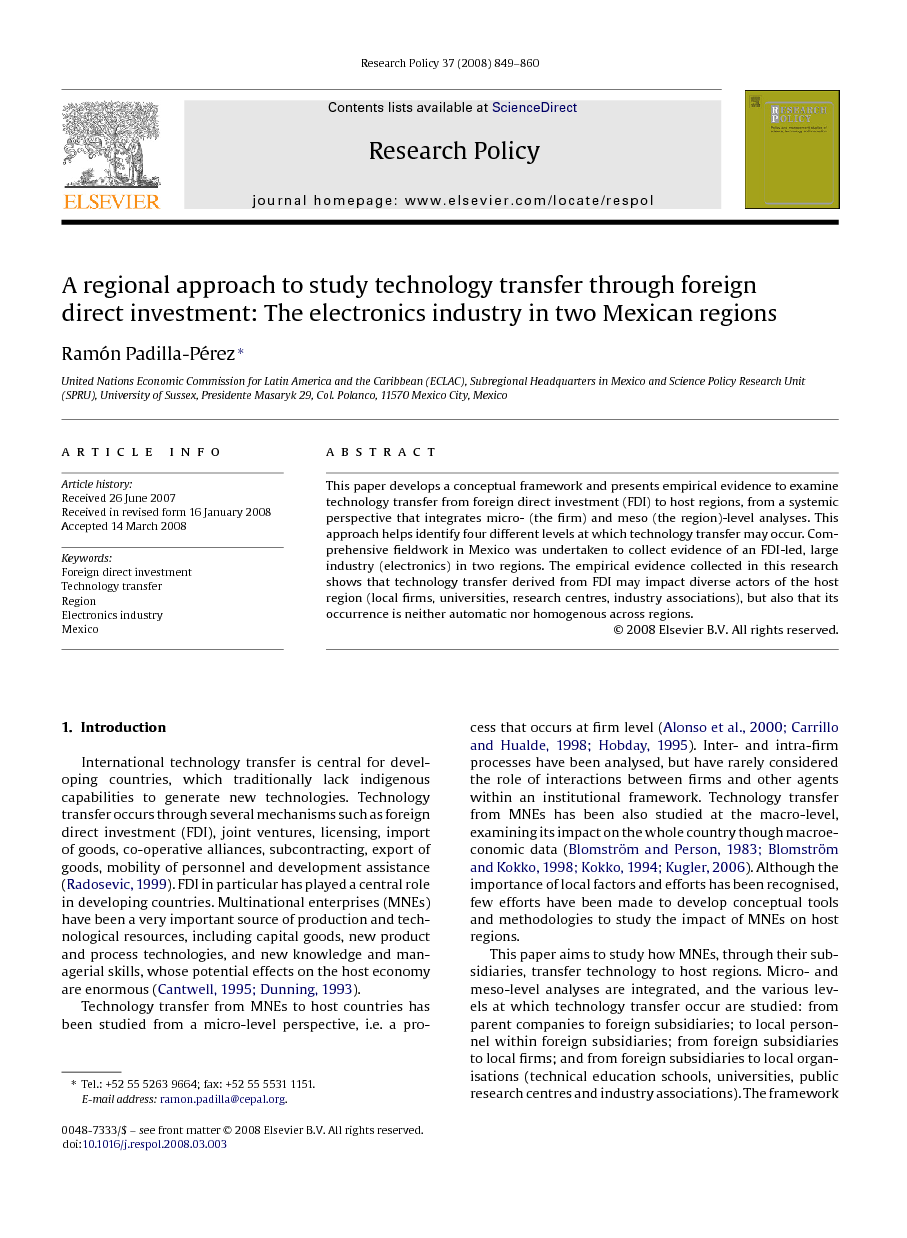 This paper develops a conceptual framework and presents empirical evidence to examine technology transfer from foreign direct investment (FDI) to host regions, from a systemic perspective that integrates micro- (the firm) and meso (the region)-level analyses. This approach helps identify four different levels at which technology transfer may occur. Comprehensive fieldwork in Mexico was undertaken to collect evidence of an FDI-led, large industry (electronics) in two regions. The empirical evidence collected in this research shows that technology transfer derived from FDI may impact diverse actors of the host region (local firms, universities, research centres, industry associations), but also that its occurrence is neither automatic nor homogenous across regions.

International technology transfer is central for developing countries, which traditionally lack indigenous capabilities to generate new technologies. Technology transfer occurs through several mechanisms such as foreign direct investment (FDI), joint ventures, licensing, import of goods, co-operative alliances, subcontracting, export of goods, mobility of personnel and development assistance (Radosevic, 1999). FDI in particular has played a central role in developing countries. Multinational enterprises (MNEs) have been a very important source of production and technological resources, including capital goods, new product and process technologies, and new knowledge and managerial skills, whose potential effects on the host economy are enormous (Cantwell, 1995 and Dunning, 1993). Technology transfer from MNEs to host countries has been studied from a micro-level perspective, i.e. a process that occurs at firm level (Alonso et al., 2000, Carrillo and Hualde, 1998 and Hobday, 1995). Inter- and intra-firm processes have been analysed, but have rarely considered the role of interactions between firms and other agents within an institutional framework. Technology transfer from MNEs has been also studied at the macro-level, examining its impact on the whole country though macroeconomic data (Blomström and Person, 1983, Blomström and Kokko, 1998, Kokko, 1994 and Kugler, 2006). Although the importance of local factors and efforts has been recognised, few efforts have been made to develop conceptual tools and methodologies to study the impact of MNEs on host regions. This paper aims to study how MNEs, through their subsidiaries, transfer technology to host regions. Micro- and meso-level analyses are integrated, and the various levels at which technology transfer occur are studied: from parent companies to foreign subsidiaries; to local personnel within foreign subsidiaries; from foreign subsidiaries to local firms; and from foreign subsidiaries to local organisations (technical education schools, universities, public research centres and industry associations). The framework here developed is applied to compare systematically technology transfer in two regions. Technology transfer is one side of the story in the process of developing indigenous capabilities through global–local interactions. This research acknowledges the importance of local efforts and absorption capabilities to study the impact of FDI on host regions. However, it is not the aim of this paper to analyse the capability building process. As said, this research integrates micro- and meso-level factors to study technology transfer to host regions. Comprehensive fieldwork in Mexico was undertaken between September 2004 and January 2005. Two regions within Mexico were selected and a survey of firms was conducted involving 80 foreign subsidiaries and locally owned firms, in addition to interviews with 30 local organisations. Mexico is an interesting case to study given the large amount of FDI that has taken place there. Over the last two decades, Mexico has been outstanding among developing countries in terms of the amount of FDI it has attracted. Between 1985 and 2005, it received $US 211 billion of FDI, the fourth highest level of investment among developing countries, after China, Hong Kong and Brazil (UNCTAD, 2006). Considering that there are important differences between industrial sectors in terms of sources of technological knowledge, the actors involved in innovation processes and the links and relationships among actors, this research focuses on one industry: electronics. In Mexico, the electronics industry is an interesting case study given its size, participation in manufacturing exports, large number of firms, strong presence of MNEs and its geographical agglomeration in regions across Mexico. One region in northern Mexico – Baja California – and one in central Mexico – Jalisco – were selected for the fieldwork. The paper is divided into four sections. The following section presents the conceptual framework and the methodology here developed to study the impact of FDI from a systemic perspective. Section 3 examines the empirical evidence collected in two regions in Mexico. Section 4 presents the conclusions.

The framework here developed integrates micro- and meso-level analyses, identifying four levels at which technology transfer from MNEs to host regions takes place. It provides a tool to study systematically global–local interactions beyond inter-firm relationships or macroeconomic analysis, shedding light on the great potential of technology transfer and dissemination derived from FDI. The framework was also helpful to compare technology transfer between regions. The same industry (electronics) was studied in two regions within the same country, thus controlling for sector and country-specific factors. The regional comparison shows that technology transfer is not an automatic, necessary and homogeneous result of the presence of MNEs. Higher local capabilities in Jalisco have been crucial to attract more complex types of technology (for instance related to product development) and to disseminate it to the rest of the local economy. Universities and research centres carrying out research related to the electronics industry and developing highly qualified and specialized human resources, and an active group of local managers are some crucial factors that explain the differences in technology transfer between Jalisco and Baja California. As stated previously, MNEs may have different technology transfer strategies. Although it is beyond the scope of this research, it is important to note that the higher presence of Asian firms in Baja California, which tend to be more reluctant to transfer technology to host countries, as well as a lower integration to global production networks in comparison to Jalisco, may have had a negative impact on the willingness to transfer key technologies and interact with host regions. The electronics industry in Mexico, dominated by MNEs, is a good example of economic and commercial integration of a developing country in Latin America into international markets. After several years in Mexico, and in some cases even decades, some foreign subsidiaries have built up close links with the local economy. However, the cases of Jalisco and Baja California show that this model of international integration has had significant limitations. First, backward linkages between MNEs and locally owned firms were limited. Foreign subsidiaries had attracted foreign suppliers to Mexico and local firms supplied mainly indirect goods, limiting the impact of the former on the host region. Second, although foreign subsidiaries had links with local universities and technical education schools, these were heavily concentrated on teaching-related activities, such as student internships, and very few research collaborative projects were identified. Third, since the activities of foreign electronics firms in Mexico are concentrated on the manufacture and assembly of components and goods, with reduced participation in knowledge-intensive activities such as product design and research and development, technology transfer is also constrained to activities with low knowledge content. In terms of public policy, this paper shows that public initiatives aimed at attracting FDI and fostering technology transfer, must not be exclusively oriented to local private enterprises, but also to other local organisations that can be benefited by the presence of FDI—such as universities, research centres and industry associations. That is, public policies towards FDI must adopt a systemic approach. On the other hand, since technology transfer from MNEs to host regions is not automatic and homogeneous, public policies towards FDI must go beyond fiscal incentives, and a stable macroeconomic and institutional framework. Additional policies aimed to develop qualified human resources, strengthen local universities and research centres, and foster links among MNEs and local organisations are crucial to encourage more knowledge-intensive technology transfer to the host region, and to absorb the technology transferred. Finally, it must be noted that this paper examined the mechanisms by which foreign subsidiaries transfer technology to host regions. It is acknowledged that technology transfer is one side of the story in the process of developing indigenous capabilities through global–local interactions. However, the detailed study of technological capability building was beyond the scope of this paper. By the same token, this paper analysed only one-way technology transfer from foreign subsidiaries to the host region. Yet the foreign subsidiary may gain new knowledge as a result of its interaction with local actors. The study of this two-way relationship is open to future research. In addition, the empirical evidence collected for this research was a snapshot of two regions at a given point in point in time. As a line of future research, the same framework could be used to study the evolution of technology transfer, following a dynamic approach.