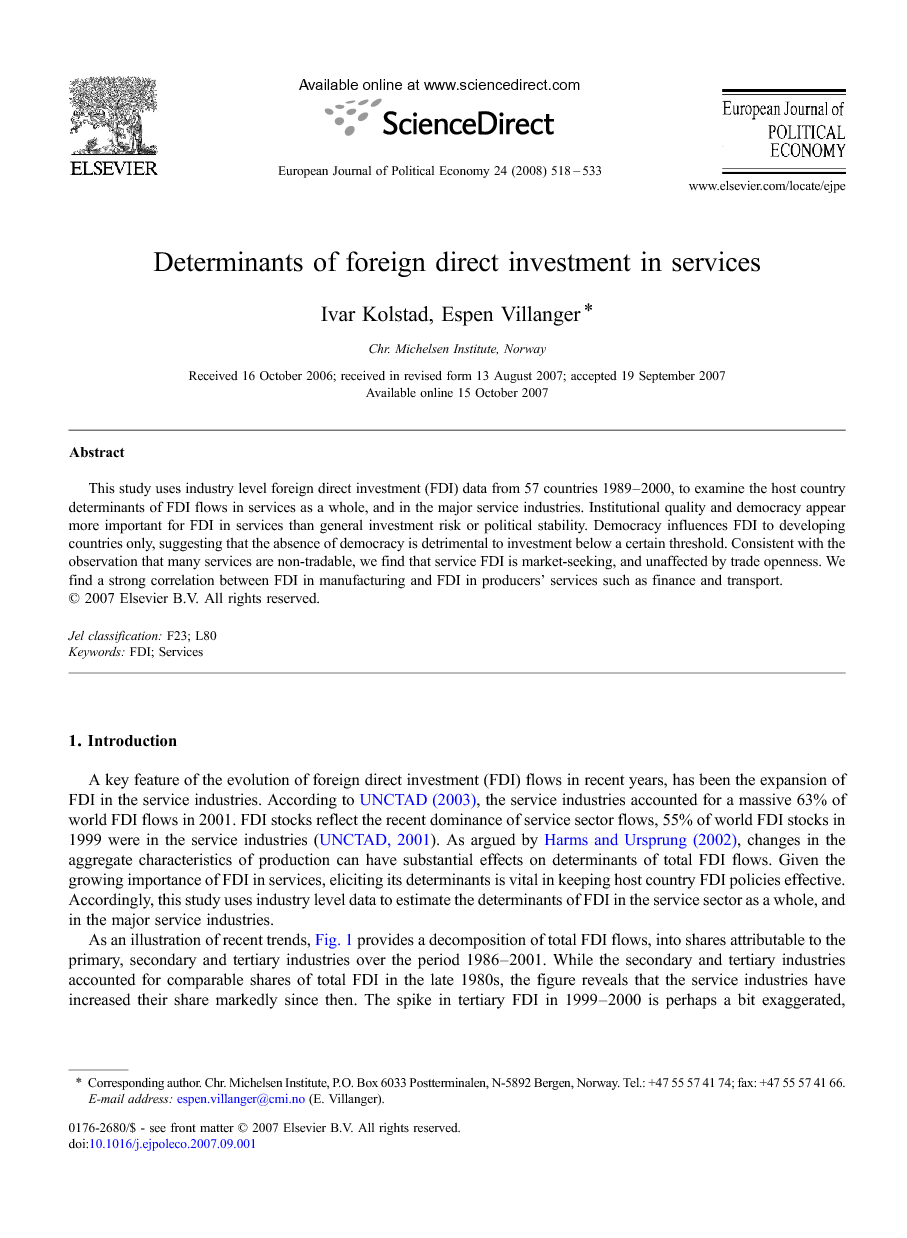 This study uses industry level foreign direct investment (FDI) data from 57 countries 1989–2000, to examine the host country determinants of FDI flows in services as a whole, and in the major service industries. Institutional quality and democracy appear more important for FDI in services than general investment risk or political stability. Democracy influences FDI to developing countries only, suggesting that the absence of democracy is detrimental to investment below a certain threshold. Consistent with the observation that many services are non-tradable, we find that service FDI is market-seeking, and unaffected by trade openness. We find a strong correlation between FDI in manufacturing and FDI in producers' services such as finance and transport.

The service sector is dominant in world foreign direct investment flows. This study suggests that political economy variables may influence FDI flows in the service industries. Institutional quality and democracy appear more important for FDI in services than general investment risk or political stability. The institutional quality variable is robust to changes in specification for the service industries as a whole, and of particular importance to FDI in the transport sector, which might be attributable to the influence of the telecommunications industry. Our results show that different political variables affect countries at different level of development, democracy is important for FDI in developing countries and general political risk and institutional quality matter in industrialized countries. These nuances in host country determinants have important policy implications, and should be pursued in more detail in further studies. This study also shows that FDI in the service sector is market seeking, and unaffected by the trade openness of host countries. The significance of the domestic market, and the insignificance of trade, are evident from the analysis of aggregate service sector FDI, and by and large reaffirmed by the analyses of the four major service industries. There are, however, also important differences in the determinants of FDI flows in different service industries. Consistent with the idea that producer services bind together a globally disintegrated chain of production, FDI in manufacturing is a robust determinant of FDI in certain producer services (finance and transport) but insignificant for FDI in other types of service industries such as trade. The use of lagged variables suggests that the producer services respond with different lags to FDI in manufacturing, the finance industry being quicker to respond than the transport industry. Given the large and growing role of services FDI in total FDI flows, eliciting the host country determinants thereof paves the way for efficient and proactive host country FDI policies. In particular, several theoretical contributions have stressed the potential gains from trade in producer services, in terms of increased productivity (Markusen, 1989 and Hodge and Nordås, 2001). Where trade is unfeasible, FDI can have similar effects. Our results indicate that a producer services sector broad in variety depends on a foreign manufacturing presence, and a large domestic market, but also on aspects of the institutional environment in the host economy.