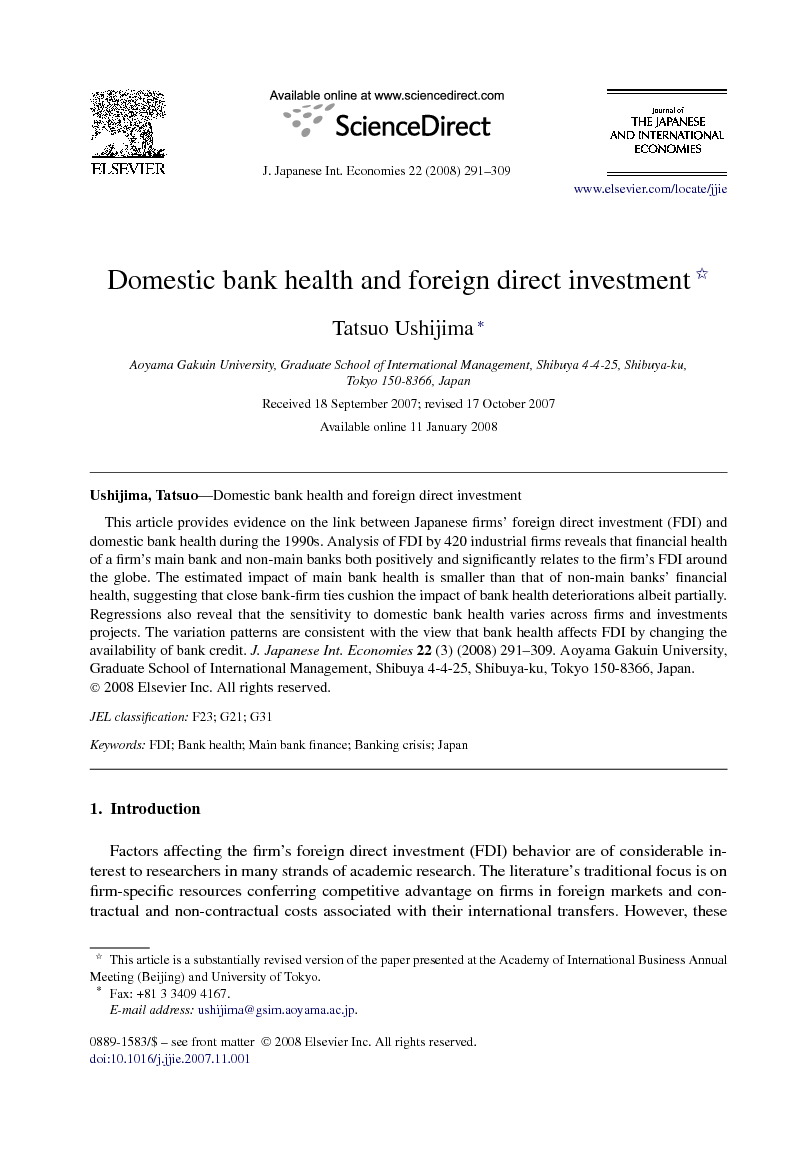 This article provides evidence on the link between Japanese firms' foreign direct investment (FDI) and domestic bank health during the 1990s. Analysis of FDI by 420 industrial firms reveals that financial health of a firm's main bank and non-main banks both positively and significantly relates to the firm's FDI around the globe. The estimated impact of main bank health is smaller than that of non-main banks' financial health, suggesting that close bank-firm ties cushion the impact of bank health deteriorations albeit partially. Regressions also reveal that the sensitivity to domestic bank health varies across firms and investments projects. The variation patterns are consistent with the view that bank health affects FDI by changing the availability of bank credit. J. Japanese Int. Economies22 (3) (2008) 291–309.

Factors affecting the firm's foreign direct investment (FDI) behavior are of considerable interest to researchers in many strands of academic research. The literature's traditional focus is on firm-specific resources conferring competitive advantage on firms in foreign markets and contractual and non-contractual costs associated with their international transfers. However, these factors do not explain why FDI flows from and into an economy fluctuate even in the short-run, oftentimes substantially (Blonigen, 1997). In studying this issue, researchers pay increasing attention to financial factors affecting the firm's ability to acquire foreign-based assets. Leading studies include Froot and Stein, 1991, Klein and Rosengren, 1994, Kogut and Chang, 1996 and Blonigen, 1997 on the influence of foreign exchange rate. In a recent study, Klein et al. (2002) contribute to this literature by highlighting a previously unstudied factor affecting the firm's ability to grow abroad, economic health of domestic banks. They find that, in response to deteriorations of domestic banks' financial health in the early 1990s, Japanese firms cut back on US direct investment substantially. The impact of bank health declines was not uniform across firms. Firms affiliated with a financially weak bank through the main bank relationship were particularly strongly affected. Research has advanced that main banks accumulating knowledge about borrowers that is unavailable to arms-length creditors facilitate firm growth by alleviating asymmetric information problems (Hoshi et al., 1991 and Aoki et al., 1994). Klein et al.'s (2002) finding suggests that deteriorations of bank health undermine the value of main bank relationship. Despite this and other important implications, evidence on the FDI–bank health link in Japan or elsewhere is still scant. In this article, I contribute to increasing our knowledge on this subject by supplying new evidence from Japan's banking crisis in the 1990s. My main research interest is in the relative impact of financial conditions of main banks and non-main banks, an issue unaddressed by Klein et al. (2002). As noted by Horiuchi et al. (1988) and Aoki et al. (1994) among others, Japanese firms borrowing exclusively from main banks are rare. Rather, firms usually borrow more from non-main banks than from the main bank. Studying the influence of financial health of non-main banks will therefore contribute to more complete understanding of the impact of banking crisis on Japanese FDI. Comparing main banks and non-main banks also sheds light on the unique role main banks play in the finance of Japanese firms, which is difficult to grasp if one focuses on main banks. In response, I consider the influence of financial conditions of all major banks a firm deals with in estimating the FDI–bank health link. My research sample is 420 industrial firms listed on the first section of Tokyo Stock Exchange (TSE) over the sample period, 1990–2000. I examine the influence of domestic bank health on these firms' FDI around the globe in two steps. The first step involves regressions based on bank-level data aggregating FDI by firms sharing the same main bank. Regressions relating a bank's financial health measured by Moody's credit rating to affiliated firms' FDI strongly suggest that main bank health constrained Japanese firms' overseas expansions during the 1990s. The second step involves firm-level regressions jointly estimating the effects of main banks' and non-main banks' financial health. Negative binominal regressions of FDI count show that financial conditions of main banks and non-main banks both positively and significantly relate to borrower firms' FDI. The main finding of this study is that financial health of non-main banks exerts a greater impact on borrower firms' FDI than that of main banks and therefore is a more binding constraint on the Japanese firm's overseas expansions. This pattern appears robustly in alternative specifications, FDI measures, and estimation samples. Moreover, the patterns of variation of bank health sensitivities across firms and investments are consistent with the view that bank health correlates with FDI because of its impacting credit supply. Overall, results reported in this article lend strong support to the notion that FDI flows from a bank-dependent economy like Japan are sensitive to domestic banks' financial health. The finding that a firms' FDI correlates more with financial health of arms-length creditors (non-main banks) than that of relationship creditors (main banks) has two major implications. First, the link between FDI and domestic bank health may be observed in various economies outside Japan because it does not require close bank-firm ties. Second, the unique role main banks played in the time of baking crisis was to mitigate the impact of banking shocks on affiliated firms because firms tied with a bank through the main bank relationship were less affected by the bank's financial conditions than firms borrowing from the same bank on a more arms-length basis. In this regard, this study echoes research on the lending behavior of Japanese banks in the 1990s including Caballero et al., 2005, Peek and Rosengren, 2005 and Hoshi, 2006. These studies show that main banks contributed disproportionately to the finance of affiliated firms, especially poorly performing ones, and their commitment increased as bank health problems deepened. The plan of this article is as follows. The next section briefly describes the background of this research. Section 3 introduces the sample and data. Sections 4 and 5 perform bank- and firm-level regressions, respectively. The final section concludes this article.

This article provides new evidence on the link between the Japanese firm's FDI and domestic bank health in the 1990s. Based on a sample of publicly traded manufacturers, I find a statistically and economically significant link, which is robust to alternative specifications and estimation techniques. A novel finding is that the FDI–bank health link in Japanese firms is not confined to main bank relationships. Rather, a firm's FDI responds more sensitively to financial health of non-main banks than that of the main bank, probably because main banks coping with their own financial problems mitigate the impact on affiliated firms by allocating credit preferentially to these firms. Researchers have long advanced that main banks decrease the cost of financial distress by supplying credit to preserve/increase the firm's going concern value (Hoshi et al., 1990 and Sheard, 1994). On the other hand, evidence from the 1990s suggests that main banks excessively contributed to the finance of poorly performing affiliated firms, and delayed exit and restructuring of these firms including otherwise insolvent “zombies” (Caballero et al., 2005 and Peek and Rosengren, 2005; and Hoshi, 2006). This article complements these studies on the bright and dark sides of main bank relationships by supplying evidence that, for better or for worse, main banks relax client firms' financial constraints and pressures from external capital markets. In a broader context, results reported in this article suggest that close bank-firm ties are not necessary to observe a link between FDI outflows from an economy and its banking sector's financial soundness. Studying the link in economies outside Japan is an interesting and natural next step toward better understanding of the phenomenon.