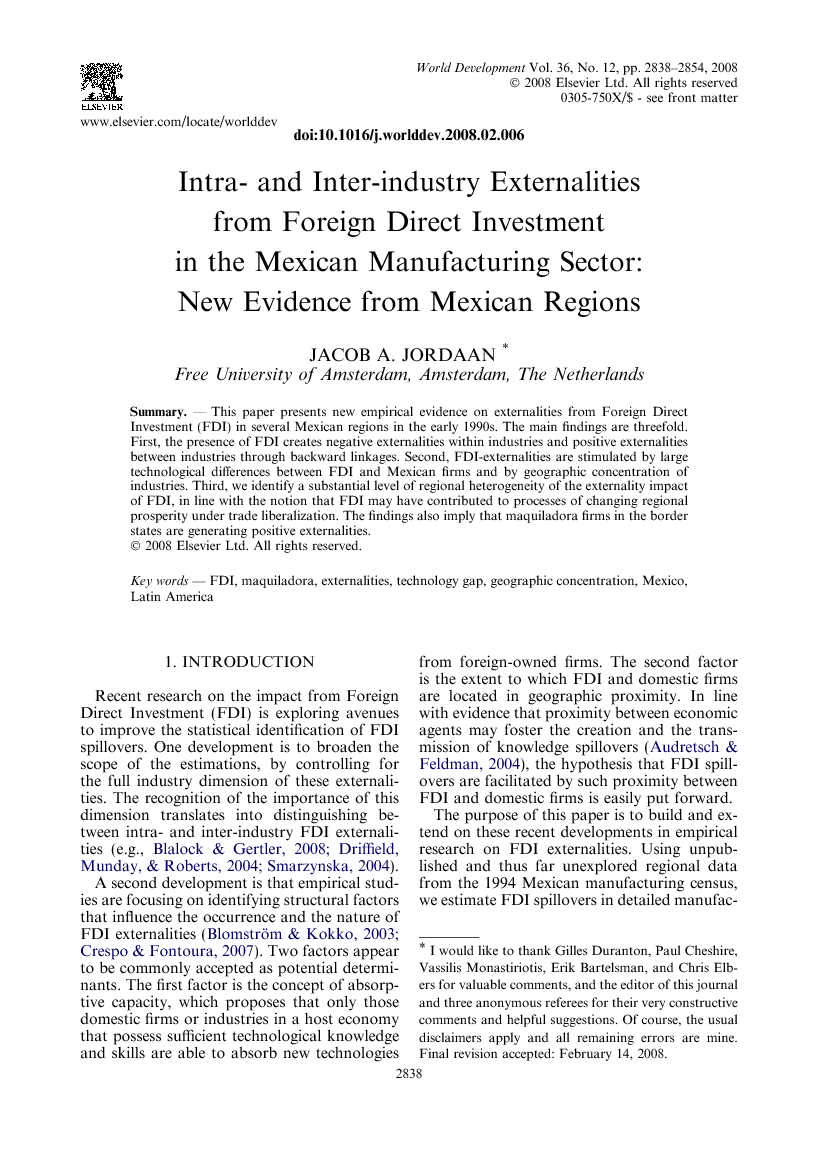 This paper presents new empirical evidence on externalities from Foreign Direct Investment (FDI) in several Mexican regions in the early 1990s. The main findings are threefold. First, the presence of FDI creates negative externalities within industries and positive externalities between industries through backward linkages. Second, FDI-externalities are stimulated by large technological differences between FDI and Mexican firms and by geographic concentration of industries. Third, we identify a substantial level of regional heterogeneity of the externality impact of FDI, in line with the notion that FDI may have contributed to processes of changing regional prosperity under trade liberalization. The findings also imply that maquiladora firms in the border states are generating positive externalities.

Recent research on FDI externalities has broadened its research scope, by controlling for the effect of intra-industry and inter-industry foreign participation and by obtaining evidence on structural factors that may influence the occurrence of such externalities. In this paper, we have extended on these issues, in the context of estimating FDI externalities among detailed manufacturing industries for several regions in the Republic of Mexico for the early 1990s. The empirical findings are noteworthy for several reasons. First, contrary to previous research on Mexico, we find that—in line with recent research on other host economies—the presence of foreign-owned firms generates two types of externalities: negative externalities within industries and positive externalities through backward linkages. The occurrence of negative externalities can be explained by the occurrence of a negative competition effect, whereas positive externalities through backward linkages occur when FDI offers various types of support to local suppliers. Second, we find that large technological differences promote the occurrence of FDI externalities. This finding cannot be explained by interpreting the technology gap as an inverse indicator of the level of absorptive capacity of Mexican firms. Instead, as we have argued, the positive effect of large technological differences on FDI spillovers indicates the importance of a large scope of potential externalities, which provides incentives to domestic firms to make externality- facilitating investments. Also, it is less likely that industries with large technological differences are subject to negative competition effects. As for the effect of geographic concentration on FDI spillovers, the findings are more diverse. The estimations indicate that the declining region Mexico City is subject to additional negative externalities in industries that are geographically concentrated. We see two possible explanations for the occurrence of this effect in this particular region. One is that the decrease in demand by FDI for local inputs leads to a decrease in the production volume among local suppliers, resulting in an efficiency loss. Second, the geographic concentration of Mexican suppliers may lead to an intensified level of competition, which, possibly in combination with a decreased level of support offered by FDI, may cause domestic firms to offer too many concessions in terms of, for example, price and quality. If so, this would result in negative externalities. In contrast to this, Baja California enjoys additional FDI spillovers in agglomerated industries. This finding is in line with the notion that geographic proximity facilitates the occurrence of positive spillovers. Third, we have assessed our findings against the background of structural regional changes in Mexico following the introduction of trade liberalization. In particular, the border states benefited from the liberalization of the Mexican market, in contrast to Mexico City which enjoyed its heydays under import substitution. Our findings suggest that FDI has contributed to these spatial changes, as they show that FDI has generated additional positive externalities in the border states, whereas Mexico City has been subject to additional negative externalities. Having said so, the role of FDI in the process of regional change requires further investigation. Importantly, recent findings by Faber (2007) shows clear differences between the spatial development of export oriented and import competing industries following the introduction of trade liberalization. In particular, the feature that import competing industries have fared relatively well in regions such as Mexico City, characterized by relative poor international market access, contrasts with our finding that this region has been subject to additional negative externalities. Further research is necessary to improve our understanding of the role that FDI has played in the structural spatial changes following the introduction of trade liberalization. Finally, the states which have been enjoying additional positive externalities from the presence of FDI are also the states that incorporate the vast majority of maquiladora FDI. The usual assessment of these foreign firms is that they are modestly integrated into the local economy, which implies that their presence is not likely to generate externalities among Mexican firms. Our findings contradict this common assessment, as they suggest that maquiladora-intensive states do enjoy additional positive externalities, including positive spillovers materializing through backward linkages between FDI and local Mexican suppliers. Future empirical research should therefore focus on acquiring more evidence on the full local sourcing behavior of maquiladora firms and on obtaining more direct evidence from local Mexican suppliers on the level and nature of maquiladora-induced externalities in the border states.