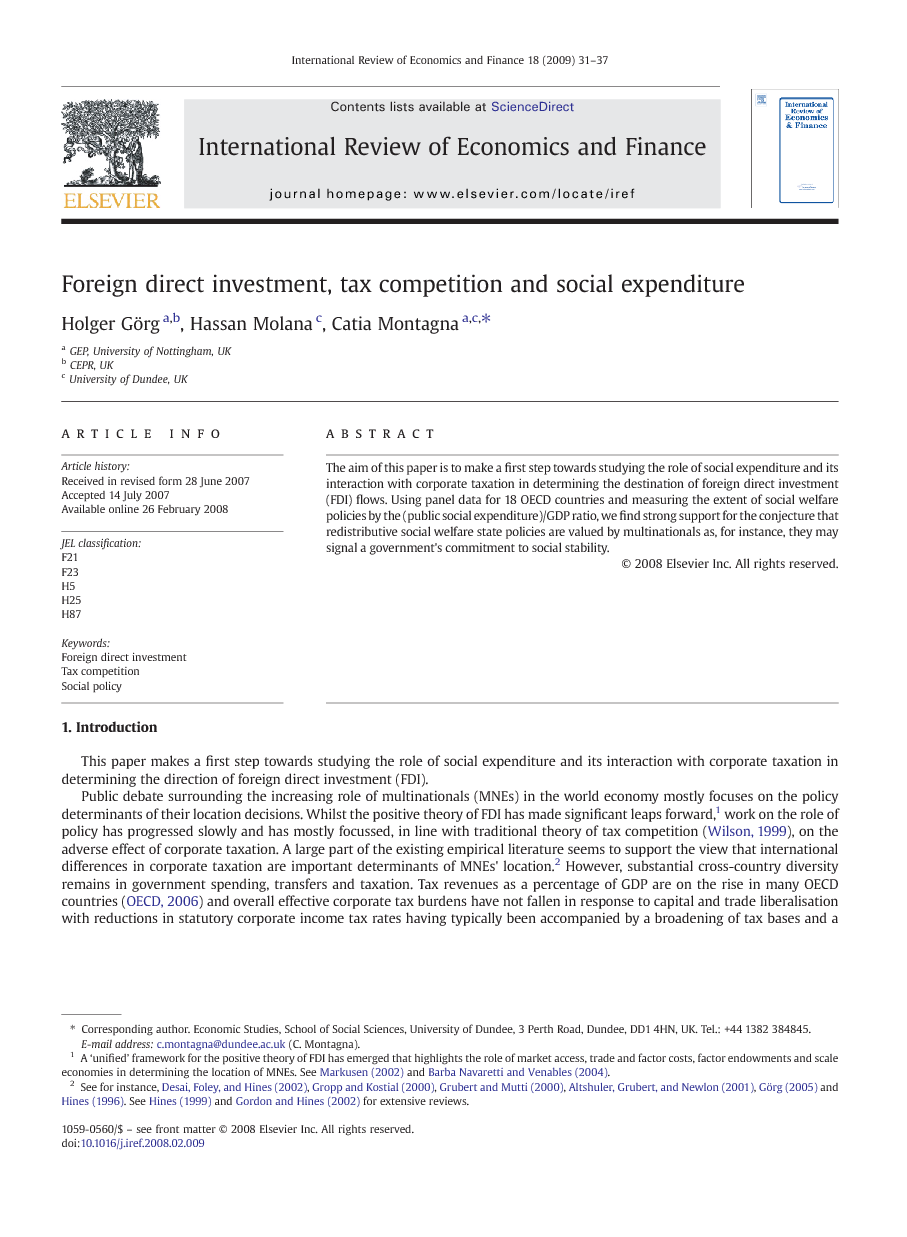 The aim of this paper is to make a first step towards studying the role of social expenditure and its interaction with corporate taxation in determining the destination of foreign direct investment (FDI) flows. Using panel data for 18 OECD countries and measuring the extent of social welfare policies by the (public social expenditure)/GDP ratio, we find strong support for the conjecture that redistributive social welfare state policies are valued by multinationals as, for instance, they may signal a government's commitment to social stability.

This paper makes a first step towards studying the role of social expenditure and its interaction with corporate taxation in determining the direction of foreign direct investment (FDI). Public debate surrounding the increasing role of multinationals (MNEs) in the world economy mostly focuses on the policy determinants of their location decisions. Whilst the positive theory of FDI has made significant leaps forward,1 work on the role of policy has progressed slowly and has mostly focussed, in line with traditional theory of tax competition (Wilson, 1999), on the adverse effect of corporate taxation. A large part of the existing empirical literature seems to support the view that international differences in corporate taxation are important determinants of MNEs' location.2 However, substantial cross-country diversity remains in government spending, transfers and taxation. Tax revenues as a percentage of GDP are on the rise in many OECD countries (OECD, 2006) and overall effective corporate tax burdens have not fallen in response to capital and trade liberalisation with reductions in statutory corporate income tax rates having typically been accompanied by a broadening of tax bases and a tightening of fiscal loopholes (Devereux, Griffith, & Klemm, 2002). More generally, inter-country differences in corporate tax treatments remain very large, casting doubt on the tax competition hypothesis. These stylised facts suggest that economic globalisation may not have fundamentally challenged governments' policy autonomy3 and that standard tax competition analyses may overstate the degree to which FDI is driven by relative tax-treatment considerations.4 Importantly, FDI flows, while relatively liquid ex-ante, are characterised by significant immobility ex-post, thus entailing a long-lasting ownership stake in a host country. Hence, in addition to factors such as the ‘thickness’ of supplier markets, the cost and quality of local inputs, and the proximity and size of final markets, firms' perceptions about the host country's economic and social environment are key to their choice of location and investment decisions depend on the combination of taxation and the provision of public goods and services that host countries can offer because of taxation. An ‘unfavourable’ tax differential may then be associated with more and not less investment flowing into a country, if higher taxes are coupled with other long-lasting favourable conditions that improve the business environment.5 Contrary to conventional wisdom that regards it as detrimental to the attraction/retention of industry, we conjecture that social policy plays an important role in the Tiebout-type of ‘public good/taxation’ combinations that matter to investors. In a recent survey of MNEs, a ‘stable social and political environment’ was found to be the second most important ‘very influential’ factor (after market access and before the quality of infrastructures and quality of skilled staff) in determining the attractiveness of an investment location (Jensen, 2006). In this paper we explore empirically the proposition that social welfare state policies, by signalling government's commitment to social contentment and stability, are valued by multinationals. Using panel data for 18 high-income OECD countries and measuring the extent of social welfare policies by the (public social expenditure)/GDP ratio, we investigate whether the latter exerts any significant impact on FDI inflows, once all other determinants are accounted for, and find strong support for the above proposition. We explain our empirical work and provide the estimation results in Section 2 and give our concluding remarks in Section 3.

We offer a first exploration of the effects of social expenditure and its interaction with corporate taxation on FDI. Using data from 18 OECD countries for the period 1984–1998, we find strong support for our conjecture that redistributive social welfare state policies are valued by MNEs. Our results suggest that competition between governments for international investment may be more muted than what is implied by the tax-competition hypothesis and that corporate taxes do not necessarily deter FDI if the revenue is used to provide public goods that improve the environment in which MNEs operate. Thus, so long as there is diversity in the combination of programmes that may be of interest to MNEs, a convergence of taxation regimes is not to be expected as a result of increasing capital mobility. This study highlights the overall empirical relationship between social policy, corporate taxation, and FDI and only offers conjectures as to the reasons behind this relationship. Future research will study the effects of specific categories of social expenditure on FDI as well as the channels and mechanisms through which these effects take place.