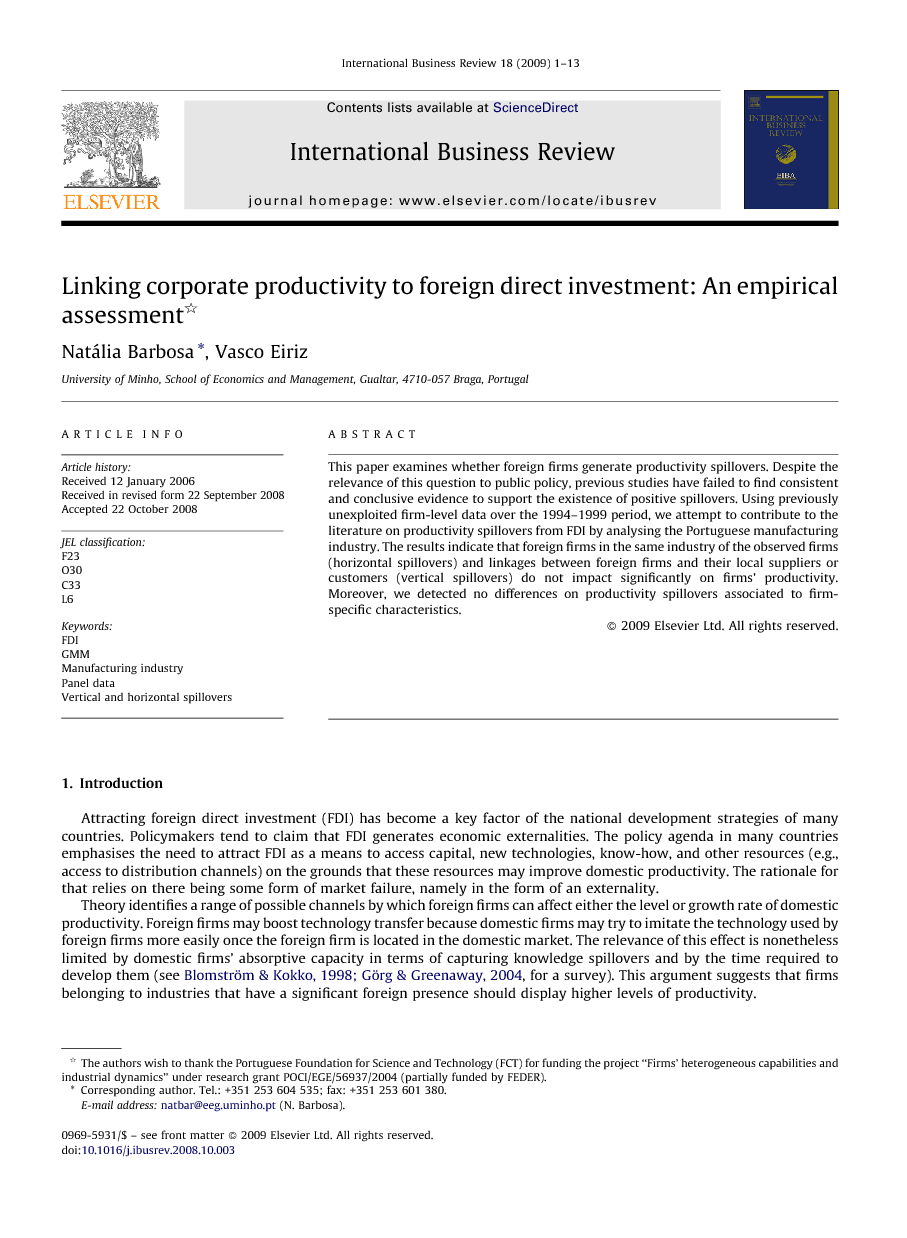 Attracting foreign direct investment (FDI) has become a key factor of the national development strategies of many countries. Policymakers tend to claim that FDI generates economic externalities. The policy agenda in many countries emphasises the need to attract FDI as a means to access capital, new technologies, know-how, and other resources (e.g., access to distribution channels) on the grounds that these resources may improve domestic productivity. The rationale for that relies on there being some form of market failure, namely in the form of an externality. Theory identifies a range of possible channels by which foreign firms can affect either the level or growth rate of domestic productivity. Foreign firms may boost technology transfer because domestic firms may try to imitate the technology used by foreign firms more easily once the foreign firm is located in the domestic market. The relevance of this effect is nonetheless limited by domestic firms’ absorptive capacity in terms of capturing knowledge spillovers and by the time required to develop them (see Blomström and Kokko, 1998 and Görg and Greenaway, 2004, for a survey). This argument suggests that firms belonging to industries that have a significant foreign presence should display higher levels of productivity. On the other hand, foreign firms may increase competitive pressure in the domestic product market, depressing the margins of firms operating in industries with an important foreign presence. In the short-run, foreign firms may lead to a decrease in domestically produced output, pushing domestic firms up their average cost curves and therefore decreasing productivity. However, in the long-run, the presence of foreign firms may well increase domestic productivity, since they are able to put into effect a selection mechanism that will choose the most efficient firms. Furthermore, the pro-competitive effect of foreign firms may enhance incentives to adopt technologies. If so, an increased foreign presence within an industry may increase the speed of technology transfer. Despite the above claims, the consequences and potential benefits of FDI are not well established. Empirical work examining the impact of foreign firms on the productivity of domestic firms has cast doubts on the importance of knowledge spillovers, yielding mixed results with estimated parameters varying from positive to insignificant or even negative. Therefore, the benefits of multinationals’ resource mobility for host economies deserve more attention. This paper looks at productivity spillovers from FDI, either through direct or indirect knowledge transfer from foreign to domestic firms, by which foreign firms may improve other firms’ productivity. It exploits firm-level panel data for manufacturing firms operating in Portugal. Portugal offers a particularly interesting case for building on empirical evidence regarding productivity spillovers from inward FDI. It is a small, open and developed economy, but within the context of the European Union (EU) it is a peripheral economy that attracts multinational companies (MNCs) which are mostly seeking locations with relatively low production costs (Barbosa, Guimarães, & Woodward, 2004). The motives for FDI in Portugal may differ from those in other European countries,1 which therefore may affect productivity spillovers (Driffield and Love, 2006 and Driffield and Love, 2007). Moreover, to the best of our knowledge, there is no similar study for Portugal that attempts to measure firm-level efficiency benefits stemming from inward FDI by explicitly considering both intra- and inter-industry spillovers in the same empirical framework. Therefore, this paper adds to our understanding of the value and interest of FDI in Portugal. Following recent work on this topic (e.g., Kolasa, 2008 and Smarzynska, 2004), this study searches for productivity spillovers that may occur due to the presence of foreign firms in the same industry of the observed firms (horizontal spillovers) and productivity spillovers that may arise due to linkages between foreign firms and their local suppliers (vertical spillovers). This distinction allows us to assess whether there are horizontal and vertical productivity spillovers from inward FDI in the Portuguese manufacturing industry and to evaluate how firm-specific characteristics affect these two types of FDI spillovers. Therefore, the paper is a step forward in evaluating the relevance of productivity spillovers associated with the activity of MNCs. It adds to the existing literature by (i) testing whether MNCs shape domestic firms’ efficiency parameter (based on the Barba Navaretti & Venables, 2004 analytical framework) using two measures of MNCs presence (one measure of MNCs presence in the same industry of the observed firms – intra-industry level; and other measure in backward and forward industries of the industry of the observed firms – inter-industry level), (ii) providing evidence on the role of firms-specific characteristics in shaping firms’ ability to benefit from inward FDI and, hence, engendering heterogeneous relationships between MNCs presence and domestic firms’ efficiency, and (iii) focusing on a host economy that mainly attracts MNCs seeking locations with relatively low production costs, which is relevant to other economies – especially those in Eastern Europe – attracting MNCs with similar motivations. This paper is organized as follows. The next section reviews the literature on productivity spillovers. The econometric model and the main estimation issues are discussed in Section 3. Section 4 describes the data and variables. Section 5 presents estimates on productivity spillover effects and examines the empirical evidence. The paper ends with a synthesis of the main results and conclusion.

The impact of inward FDI on firms’ productive efficiency is a challenging and timely research topic. The claim that positive spillovers are expected to be generated by foreign firms is the basis for a large number of countries’ policies when seeking to attract FDI. This paper reported the findings of research into whether this claim is valid for the Portuguese manufacturing industry for the period between 1994 and 1999. Based on robust estimates across several issues regarding measurement and specification, the empirical results did not provide strong evidence that inward FDI increases corporate productivity. Moreover, the estimates indicate that the lack of horizontal spillovers is a relatively persistent finding among different groups of firms. We detected no significant differences between large and small firms, between export-oriented and domestic market-oriented firms, and between firms operating in R&D intensive industries and other firms. In turn, large and exported-oriented firms seem to benefit from vertical spillovers taking place through customer–supplier relationships with MNCs, despite the identified drawbacks associated to the way vertical linkages at industry level was measured. One interesting extension of this research would be to examine the impact of inward FDI on corporate productivity according to the extent of foreign ownership, and specifically whether differences are observed between majority- and minority-held foreign firms and whether such considerations affect the nature of spillovers. Another potentially fruitful extension would be to attempt to disentangle the two opposite effects comprised in our specification of the variable HORZ. In fact, this variable might reflect both knowledge spillovers and the pro-competitive effect of FDI that works in the opposite direction. These extensions could constitute an important contribution to our understanding of the conditions and ways under which foreign firms may affect productive efficiency.