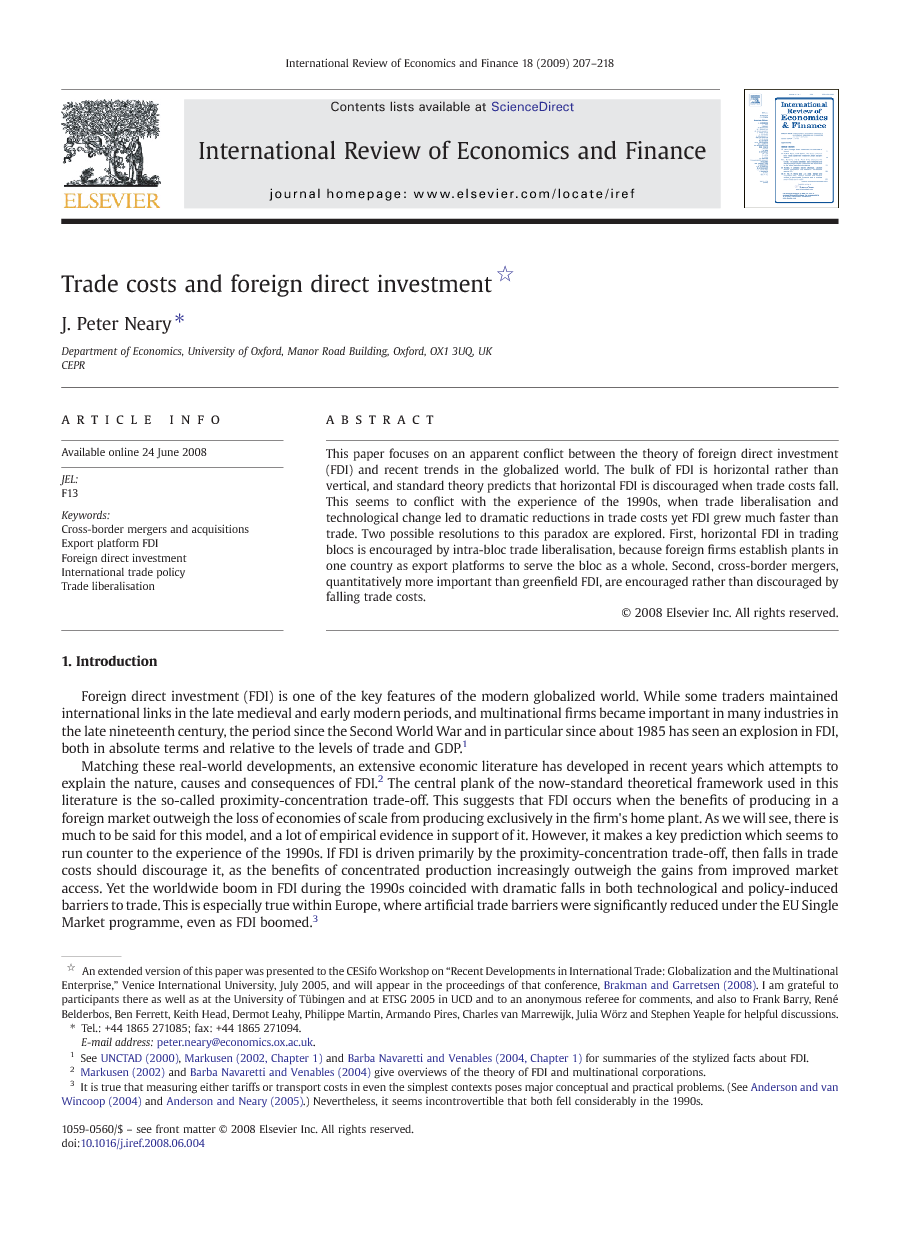 This paper focuses on an apparent conflict between the theory of foreign direct investment (FDI) and recent trends in the globalized world. The bulk of FDI is horizontal rather than vertical, and standard theory predicts that horizontal FDI is discouraged when trade costs fall. This seems to conflict with the experience of the 1990s, when trade liberalisation and technological change led to dramatic reductions in trade costs yet FDI grew much faster than trade. Two possible resolutions to this paradox are explored. First, horizontal FDI in trading blocs is encouraged by intra-bloc trade liberalisation, because foreign firms establish plants in one country as export platforms to serve the bloc as a whole. Second, cross-border mergers, quantitatively more important than greenfield FDI, are encouraged rather than discouraged by falling trade costs. JEL

Languages are at the very heart of business communication and negotiation. Yet, while a significant literature examines how institutions, common currency and trade agreements affect international trade and foreign direct investment (FDI) flows, few studies systematically analyze the effect of language on those flows. Extant studies show trading partners, speaking the same language, experience a significant decline in transaction costs in trade (Helliwell, 1999, Hutchinson, 2002 and Melitz, 2008). In this paper, we answer two new questions. First, what are the transaction costs of country pairs that do not speak the same language? We focus on four major languages: English, French, Spanish, and Arabic. Second, what are the differences in transaction cost between trade and FDI for these major trade languages? Economic transactions require more than the presence of goods to exchange; interested parties must possess the ability to express needs for those goods and to negotiate acceptable arrangements. Demand for linguistic competencies also increase with product sophistication, differentiation, and ease of product substitution. Time and effort required to attain language competency are part of the transaction costs of languages in economic exchange. To engage in bilateral trade and investment, a country-pair composed of different languages requires a capacity to communicate in one, or both, potential partners’ languages, or in a third language which both countries’ economic actors find acceptable. Languages require time to learn; the more difficulty encountered in learning the target language, the higher the transaction cost involved. Selten and Pool (1991) structure a game in which learners determine their optimal linguistic portfolio based on a cost/benefit analysis, and then acquire those languages which maximize benefits while lowering costs. Ginsburgh et al. (2007) extend Selten and Pool's work by examining the likelihood of an individual learning a specific target language based on the benefits and costs involved. They find that the larger the native speaker's population, the less inclination to learn another language, while the more the target language is spoken, the more attractive it becomes to the native speaker to learn it. Lazear (1999) finds similar benefits of scale. Human capital earnings literature focuses on the language skills that lower transaction costs and information costs, and thus raise earnings (Dustmann, 1994, Chiswick and Miller, 1995, Shields and Wheatley Price, 2002 and Casale and Posel, 2011). Our model tests transaction costs of major languages in trade and FDI.

In this paper, we investigate the role of language in international trade and FDI flows. Using a gravity equation with country-fixed, country-pair random, and year-fixed effects, we show that speaking a common language is more important in FDI than in trade. In addition, as consistent with transaction cost economics theory, we find a common hierarchy in transaction costs of major languages: English is lowest, followed by French, Spanish, and Arabic. We are proposing two future research streams. First, to confirm the generality of our findings, it is necessary to extend our research into other international economic transactions such as merger and acquisition flows, immigration flows, and international travel flows as well as the location choice of multinational enterprises. Second, several countries have established their cultural and language institutes in foreign countries, such as China's Confucius Institutes, Germany's Goethe Institutes, France's Alliances Frances and the UK's British Council, to enhance the familiarity of their culture and language in those countries (Lien et al., 2012). These institutes likely lower transaction costs in language and culture. In particular we expect that these institutes lower transaction costs in trade and FDI of culturally sensitive goods and services. Future research may analyze how these institutes moderate the effects of language and cultural distances on sectoral trade and FDI flows.