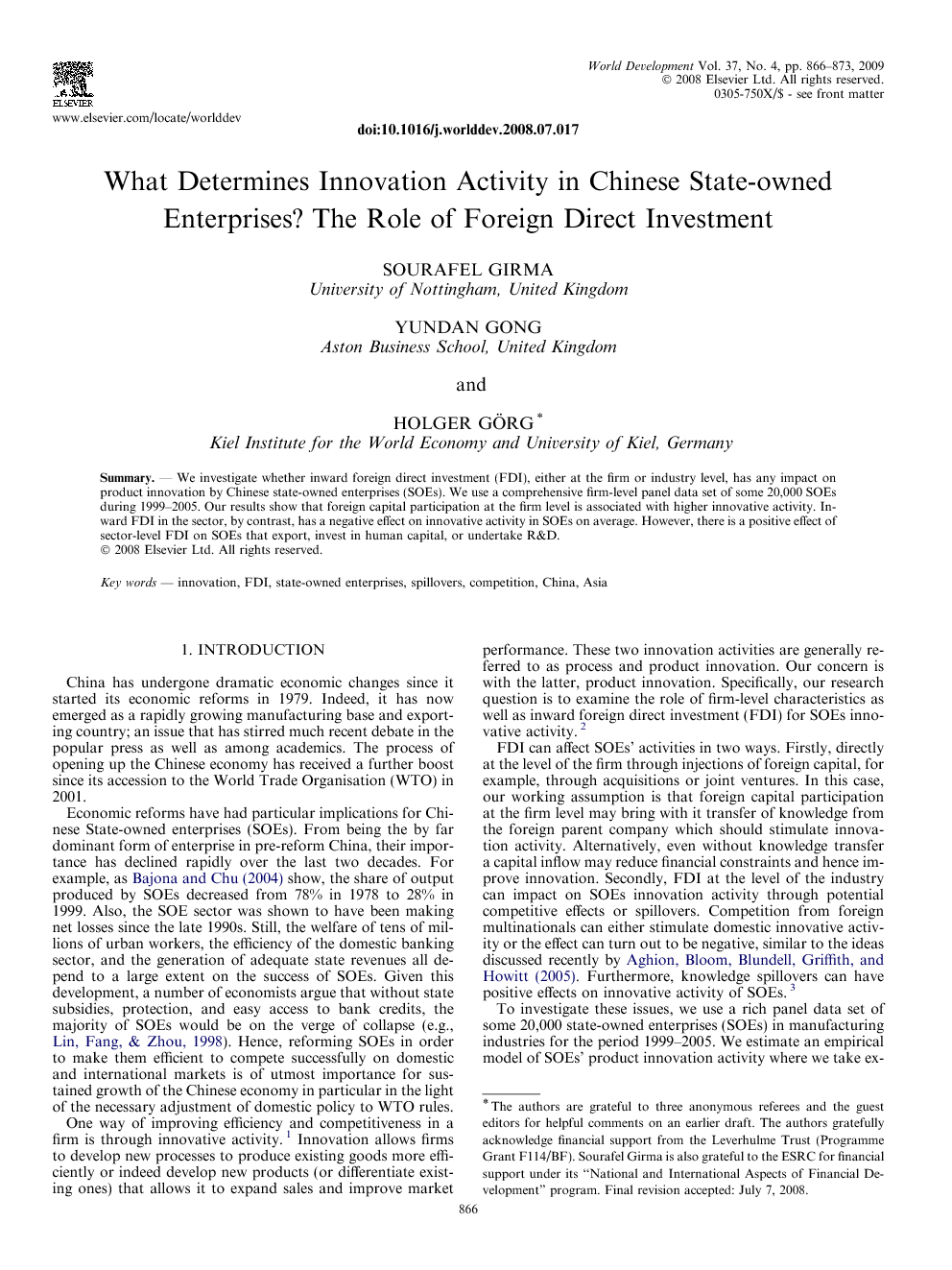 We investigate whether inward foreign direct investment (FDI), either at the firm or industry level, has any impact on product innovation by Chinese state-owned enterprises (SOEs). We use a comprehensive firm-level panel data set of some 20,000 SOEs during 1999–2005. Our results show that foreign capital participation at the firm level is associated with higher innovative activity. Inward FDI in the sector, by contrast, has a negative effect on innovative activity in SOEs on average. However, there is a positive effect of sector-level FDI on SOEs that export, invest in human capital, or undertake R&D.

China has undergone dramatic economic changes since it started its economic reforms in 1979. Indeed, it has now emerged as a rapidly growing manufacturing base and exporting country; an issue that has stirred much recent debate in the popular press as well as among academics. The process of opening up the Chinese economy has received a further boost since its accession to the World Trade Organisation (WTO) in 2001. Economic reforms have had particular implications for Chinese State-owned enterprises (SOEs). From being the by far dominant form of enterprise in pre-reform China, their importance has declined rapidly over the last two decades. For example, as Bajona and Chu (2004) show, the share of output produced by SOEs decreased from 78% in 1978 to 28% in 1999. Also, the SOE sector was shown to have been making net losses since the late 1990s. Still, the welfare of tens of millions of urban workers, the efficiency of the domestic banking sector, and the generation of adequate state revenues all depend to a large extent on the success of SOEs. Given this development, a number of economists argue that without state subsidies, protection, and easy access to bank credits, the majority of SOEs would be on the verge of collapse (e.g., Lin, Fang, & Zhou, 1998). Hence, reforming SOEs in order to make them efficient to compete successfully on domestic and international markets is of utmost importance for sustained growth of the Chinese economy in particular in the light of the necessary adjustment of domestic policy to WTO rules. One way of improving efficiency and competitiveness in a firm is through innovative activity.1 Innovation allows firms to develop new processes to produce existing goods more efficiently or indeed develop new products (or differentiate existing ones) that allows it to expand sales and improve market performance. These two innovation activities are generally referred to as process and product innovation. Our concern is with the latter, product innovation. Specifically, our research question is to examine the role of firm-level characteristics as well as inward foreign direct investment (FDI) for SOEs innovative activity.2 FDI can affect SOEs’ activities in two ways. Firstly, directly at the level of the firm through injections of foreign capital, for example, through acquisitions or joint ventures. In this case, our working assumption is that foreign capital participation at the firm level may bring with it transfer of knowledge from the foreign parent company which should stimulate innovation activity. Alternatively, even without knowledge transfer a capital inflow may reduce financial constraints and hence improve innovation. Secondly, FDI at the level of the industry can impact on SOEs innovation activity through potential competitive effects or spillovers. Competition from foreign multinationals can either stimulate domestic innovative activity or the effect can turn out to be negative, similar to the ideas discussed recently by Aghion, Bloom, Blundell, Griffith, and Howitt (2005). Furthermore, knowledge spillovers can have positive effects on innovative activity of SOEs.3 To investigate these issues, we use a rich panel data set of some 20,000 state-owned enterprises (SOEs) in manufacturing industries for the period 1999–2005. We estimate an empirical model of SOEs’ product innovation activity where we take explicit account of endogeneity of regressors and firm heterogeneity, which may affect whether firms benefit from FDI. Our results show that inward FDI at the sector-level impacts negatively on the innovative activity of SOEs, on average. We also find that SOEs with foreign capital participation innovate more than other SOEs. Taking account of firm-level heterogeneity, we find that there is a positive effect of sector-level FDI on SOEs, which are R&D active, engage in labor training, or are exporters. The remainder of the paper is structured as follows: Section 2 provides a brief overview of the development of inward FDI in China. Section 3 describes the empirical approach, while Section 4 introduces the data set and provides some summary statistics. Econometric results are discussed in Sections 5 and 6 concludes.

This paper investigates whether inward FDI, at the level of the firm and industry, has any impact on the rate of product innovation by the Chinese state-owned enterprises (SOEs). To do so we use a rich firm level panel data set of some 20,000 SOEs covering the period 1999–2005. Our results show that that foreign capital participation in an SOE is associated with higher innovative activity. Inward FDI in the sector has, on average, a negative effect on innovative activity in SOEs. However, there is a positive effect of FDI on SOEs that export, invest in human capital, or have prior innovation R&D experience. We can interpret our findings in terms of the ideas developed by Aghion et al. (2005) on the role of competition for innovation. Poorly performing SOEs may be “laggards” and hence their innovative activity is discouraged due to increasing competition through FDI. By contrast, Chinese SOEs with higher level of absorptive capacity may be “neck-and-neck” with foreign multinationals and, hence, their innovative activities are stimulated. This points to the conclusion that, rather than just relying on unconditional FDI spillovers to improve domestic innovative activity, policy makers should focus more on getting the firm-level fundamentals right.