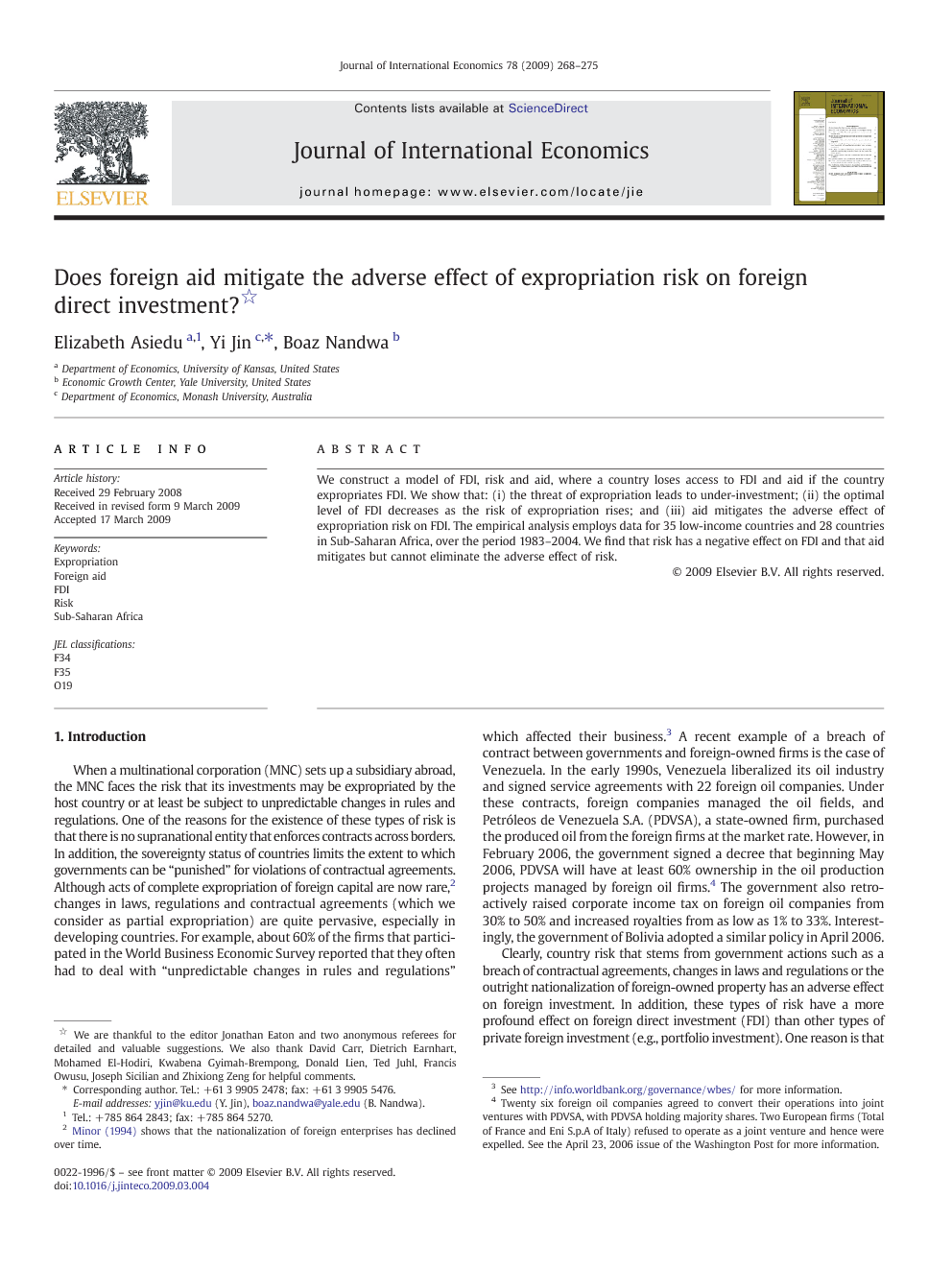 We construct a model of FDI, risk and aid, where a country loses access to FDI and aid if the country expropriates FDI. We show that: (i) the threat of expropriation leads to under-investment; (ii) the optimal level of FDI decreases as the risk of expropriation rises; and (iii) aid mitigates the adverse effect of expropriation risk on FDI. The empirical analysis employs data for 35 low-income countries and 28 countries in Sub-Saharan Africa, over the period 1983–2004. We find that risk has a negative effect on FDI and that aid mitigates but cannot eliminate the adverse effect of risk.

This paper has theoretically and empirically examined the link between FDI, foreign aid and expropriation risk. We find that risk has a negative effect on FDI, aid mitigates the adverse effect of risk on FDI, and that both bilateral and multilateral aids are roughly equivalent at achieving these results. We also find that the amount of aid required to completely eliminate the adverse effect of risk on FDI is implausibly high. With regard to policy, our results suggest that increasing aid will be beneficial to high risk countries. This recommendation is particularly relevant for countries in Sub-Saharan Africa, since the region is perceived to be very risky. However, we find that realistically, aid cannot completely offset the adverse effect of risk, suggesting that there is a limit to which external assistance, in particular aid, can be helpful. This suggests that countries, even if they receive aid, still need to take measures to reduce the types of risk that deter FDI, such as the lack of enforcement of rules and regulations. A note of caution is that one has to be careful about using aid as a tool to mitigate the effect of country risk on foreign investment. The reason is that aid may mask the actual effect of risk and therefore reduce incentives for countries to improve their risk profile. Thus, our results make a case for sequential aid-conditionality, where aid is disbursed only after the recipient country has enacted structural reform to reduce the types of risk that deter FDI. To the best of our knowledge, this paper is the first to theoretically and empirically analyze the link between FDI, aid and country risk. Indeed, the simple structure of the model provides a useful framework for additional theoretical and empirical analysis. For example, the model may be extended to allow the recipient country to engage in production using a domestic technology. Here, one can analyze and compare the effectiveness of various types of aid in ameliorating the adverse effect of risk on FDI. For example, one may compare technical assistance aid with budget-support aid. Technical assistance aid may increase the efficiency of the domestic production technology. In contrast, aid that comes in the form of budget support augments the country's domestic capital for production and may not increase productivity. The model can also be easily amended to analyze the link between country risk, foreign aid and portfolio investment. Clearly, such an analysis will be more relevant for middle-income countries and emerging economies. It will be interesting to examine whether aid mitigates the adverse effect of country risk on portfolio investment. Another interesting exercise will be to establish a “target level of risk” and also find the level of aid that would drive risk to this non-zero, but “acceptable”, target.