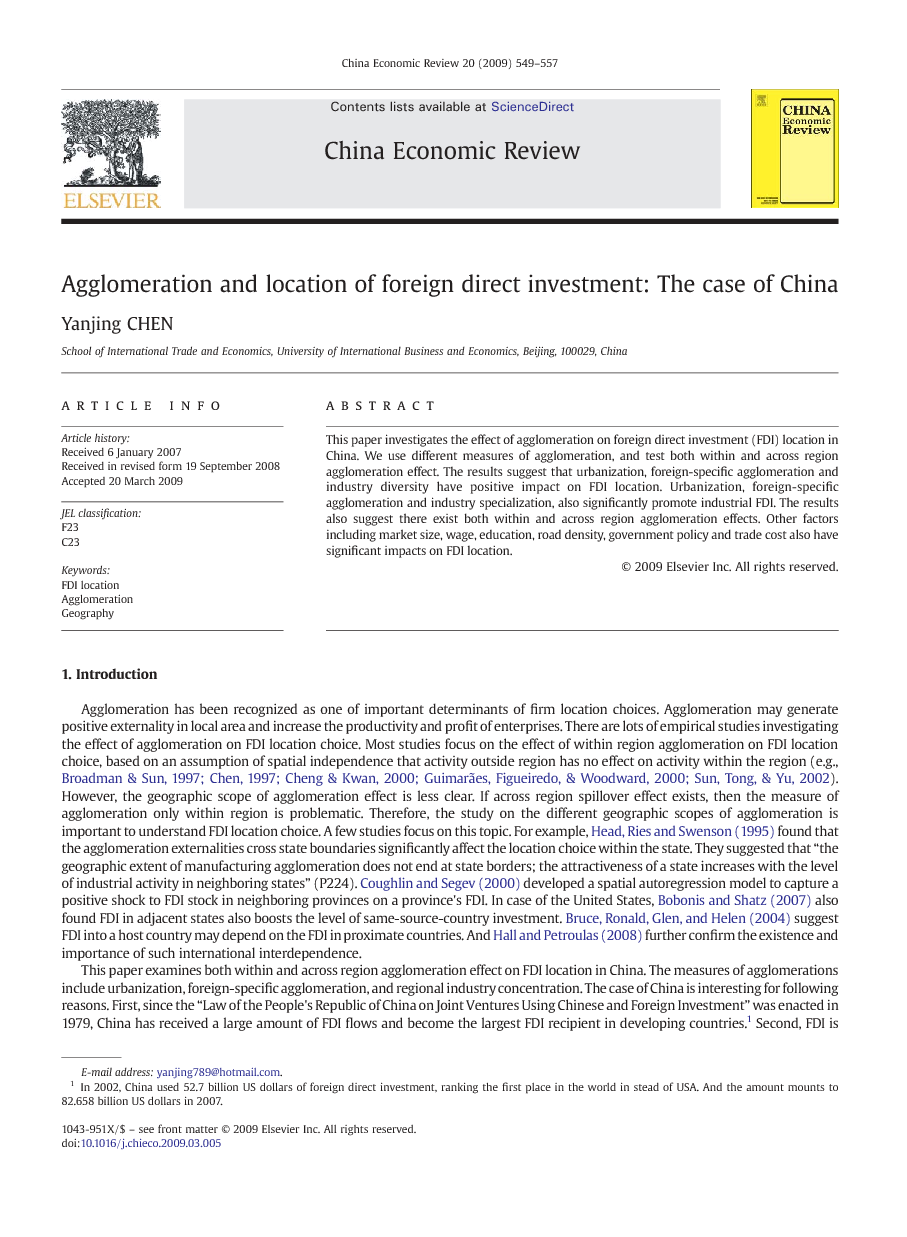 Agglomeration has been recognized as one of important determinants of firm location choices. Agglomeration may generate positive externality in local area and increase the productivity and profit of enterprises. There are lots of empirical studies investigating the effect of agglomeration on FDI location choice. Most studies focus on the effect of within region agglomeration on FDI location choice, based on an assumption of spatial independence that activity outside region has no effect on activity within the region (e.g., Broadman and Sun, 1997, Chen, 1997, Cheng and Kwan, 2000, Guimarães et al., 2000 and Sun et al., 2002). However, the geographic scope of agglomeration effect is less clear. If across region spillover effect exists, then the measure of agglomeration only within region is problematic. Therefore, the study on the different geographic scopes of agglomeration is important to understand FDI location choice. A few studies focus on this topic. For example, Head, Ries and Swenson (1995) found that the agglomeration externalities cross state boundaries significantly affect the location choice within the state. They suggested that “the geographic extent of manufacturing agglomeration does not end at state borders; the attractiveness of a state increases with the level of industrial activity in neighboring states” (P224). Coughlin and Segev (2000) developed a spatial autoregression model to capture a positive shock to FDI stock in neighboring provinces on a province's FDI. In case of the United States, Bobonis and Shatz (2007) also found FDI in adjacent states also boosts the level of same-source-country investment. Bruce, Ronald, Glen, and Helen (2004) suggest FDI into a host country may depend on the FDI in proximate countries. And Hall and Petroulas (2008) further confirm the existence and importance of such international interdependence. This paper examines both within and across region agglomeration effect on FDI location in China. The measures of agglomerations include urbanization, foreign-specific agglomeration, and regional industry concentration. The case of China is interesting for following reasons. First, since the “Law of the People's Republic of China on Joint Ventures Using Chinese and Foreign Investment” was enacted in 1979, China has received a large amount of FDI flows and become the largest FDI recipient in developing countries.1 Second, FDI is unevenly distributed across provinces and industries within China.2 Most FDI in China locates on the eastern coastal area and concentrates on the “foot-loose” manufacturing industries.3 This provides a good setup for the study of agglomeration effect on FDI location. Our results show that foreign-specific agglomeration, urbanization and industry diversity are important determinants of FDI location. The results also suggest that there exist both within and across region agglomeration effect. Using disaggregate industrial data, we examine industry-specific agglomeration effect and find that industry specialization significantly promotes industrial FDI. This effect is significant both within and across region. Other factors including market size, wage, education, road density, government policy and trade cost have significant impact on local FDI location choice. This paper is organized as follows. Section 2 describes the data and specification. The empirical results are discussed in Section 3. Section 4 examines the effect of industry-specific agglomeration on FDI location and refers robustness test at the same time. Section 5 concludes the paper.