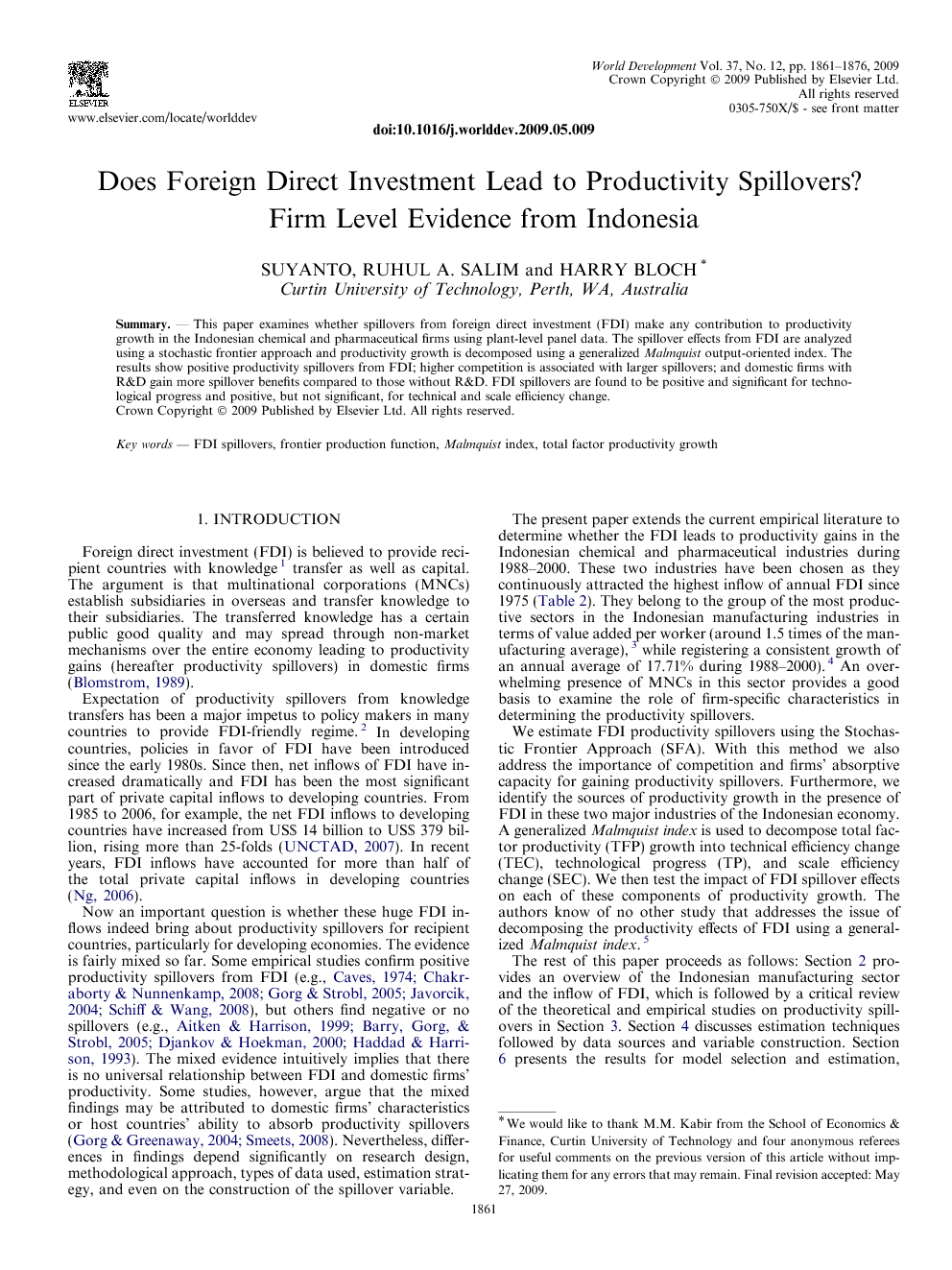 This paper examines whether spillovers from foreign direct investment (FDI) make any contribution to productivity growth in the Indonesian chemical and pharmaceutical firms using plant-level panel data. The spillover effects from FDI are analyzed using a stochastic frontier approach and productivity growth is decomposed using a generalized Malmquist output-oriented index. The results show positive productivity spillovers from FDI; higher competition is associated with larger spillovers; and domestic firms with R&D gain more spillover benefits compared to those without R&D. FDI spillovers are found to be positive and significant for technological progress and positive, but not significant, for technical and scale efficiency change.

Foreign direct investment (FDI) is believed to provide recipient countries with knowledge1 transfer as well as capital. The argument is that multinational corporations (MNCs) establish subsidiaries in overseas and transfer knowledge to their subsidiaries. The transferred knowledge has a certain public good quality and may spread through non-market mechanisms over the entire economy leading to productivity gains (hereafter productivity spillovers) in domestic firms (Blomstrom, 1989). Expectation of productivity spillovers from knowledge transfers has been a major impetus to policy makers in many countries to provide FDI-friendly regime.2 In developing countries, policies in favor of FDI have been introduced since the early 1980s. Since then, net inflows of FDI have increased dramatically and FDI has been the most significant part of private capital inflows to developing countries. From 1985 to 2006, for example, the net FDI inflows to developing countries have increased from US$ 14 billion to US$ 379 billion, rising more than 25-folds (UNCTAD, 2007). In recent years, FDI inflows have accounted for more than half of the total private capital inflows in developing countries (Ng, 2006). Now an important question is whether these huge FDI inflows indeed bring about productivity spillovers for recipient countries, particularly for developing economies. The evidence is fairly mixed so far. Some empirical studies confirm positive productivity spillovers from FDI (e.g., Caves, 1974, Chakraborty and Nunnenkamp, 2008, Gorg and Strobl, 2005, Javorcik, 2004 and Schiff and Wang, 2008), but others find negative or no spillovers (e.g., Aitken and Harrison, 1999, Barry et al., 2005, Djankov and Hoekman, 2000 and Haddad and Harrison, 1993). The mixed evidence intuitively implies that there is no universal relationship between FDI and domestic firms’ productivity. Some studies, however, argue that the mixed findings may be attributed to domestic firms’ characteristics or host countries’ ability to absorb productivity spillovers (Gorg and Greenaway, 2004 and Smeets, 2008). Nevertheless, differences in findings depend significantly on research design, methodological approach, types of data used, estimation strategy, and even on the construction of the spillover variable. The present paper extends the current empirical literature to determine whether the FDI leads to productivity gains in the Indonesian chemical and pharmaceutical industries during 1988–2000. These two industries have been chosen as they continuously attracted the highest inflow of annual FDI since 1975 (Table 2). They belong to the group of the most productive sectors in the Indonesian manufacturing industries in terms of value added per worker (around 1.5 times of the manufacturing average),3 while registering a consistent growth of an annual average of 17.71% during 1988–2000).4 An overwhelming presence of MNCs in this sector provides a good basis to examine the role of firm-specific characteristics in determining the productivity spillovers. We estimate FDI productivity spillovers using the Stochastic Frontier Approach (SFA). With this method we also address the importance of competition and firms’ absorptive capacity for gaining productivity spillovers. Furthermore, we identify the sources of productivity growth in the presence of FDI in these two major industries of the Indonesian economy. A generalized Malmquist index is used to decompose total factor productivity (TFP) growth into technical efficiency change (TEC), technological progress (TP), and scale efficiency change (SEC). We then test the impact of FDI spillover effects on each of these components of productivity growth. The authors know of no other study that addresses the issue of decomposing the productivity effects of FDI using a generalized Malmquist index.5 The rest of this paper proceeds as follows: Section 2 provides an overview of the Indonesian manufacturing sector and the inflow of FDI, which is followed by a critical review of the theoretical and empirical studies on productivity spillovers in Section 3. Section 4 discusses estimation techniques followed by data sources and variable construction. Section 6 presents the results for model selection and estimation, followed by an analysis of empirical results. The summary of findings and policy implications is given in the final section

This study examines the productivity spillovers from FDI in the Indonesian chemical and pharmaceutical sectors by using a unique and extensive firm-level panel data covering the period 1988–2000. Unlike most of the previous studies on FDI productivity spillovers, this paper uses the stochastic frontier production function following Battese and Coelli (1995) and a generalized Malmquist output-oriented index to decompose productivity growth. The intra-industry productivity spillovers are examined through the spillover variable, and the roles of competition and R&D in extending spillovers from FDI are evaluated to test a channel of productivity spillovers. The empirical results show that intra-industry productivity spillovers are present in the Indonesian chemical and pharmaceutical sectors. It also shows that competition facilitates spillovers from a foreign presence in the industry. Firms with R&D expenditure receive more productivity spillovers than those without R&D expenditure. Furthermore, technological progress is the major driver of productivity growth in the Indonesian chemical and pharmaceutical firms. FDI spillovers have been found to be positive and significant for technological progress; however, positive but not significant for technical and scale efficiency change. Despite the presence of positive spillovers from FDI, the policy implications of these findings are not straightforward. These results may support the continuing fiscal and investment incentives provided by the Indonesian government for FDI. However, with many countries competing for FDI, particularly in the presence of an asymmetric competition among countries, there are undesirable welfare effects for a developing country, such as Indonesia (Bjorvata & Eckel, 2006). This suggests policies for strengthening the absorptive capacity of domestic firms through investing in knowledge and human capital formation may be superior to policies that provide concessions for FDI. There is also a need for further institutional reforms including political system, economic management and government administration, and trade policies in order to develop a more competitive environment in the manufacturing sector. More general policies should be pursued, which not only attract FDI but also benefit domestic firms, for example, build modern infrastructure, increasing and strengthening the institutions for accelerating and sustaining economic growth.