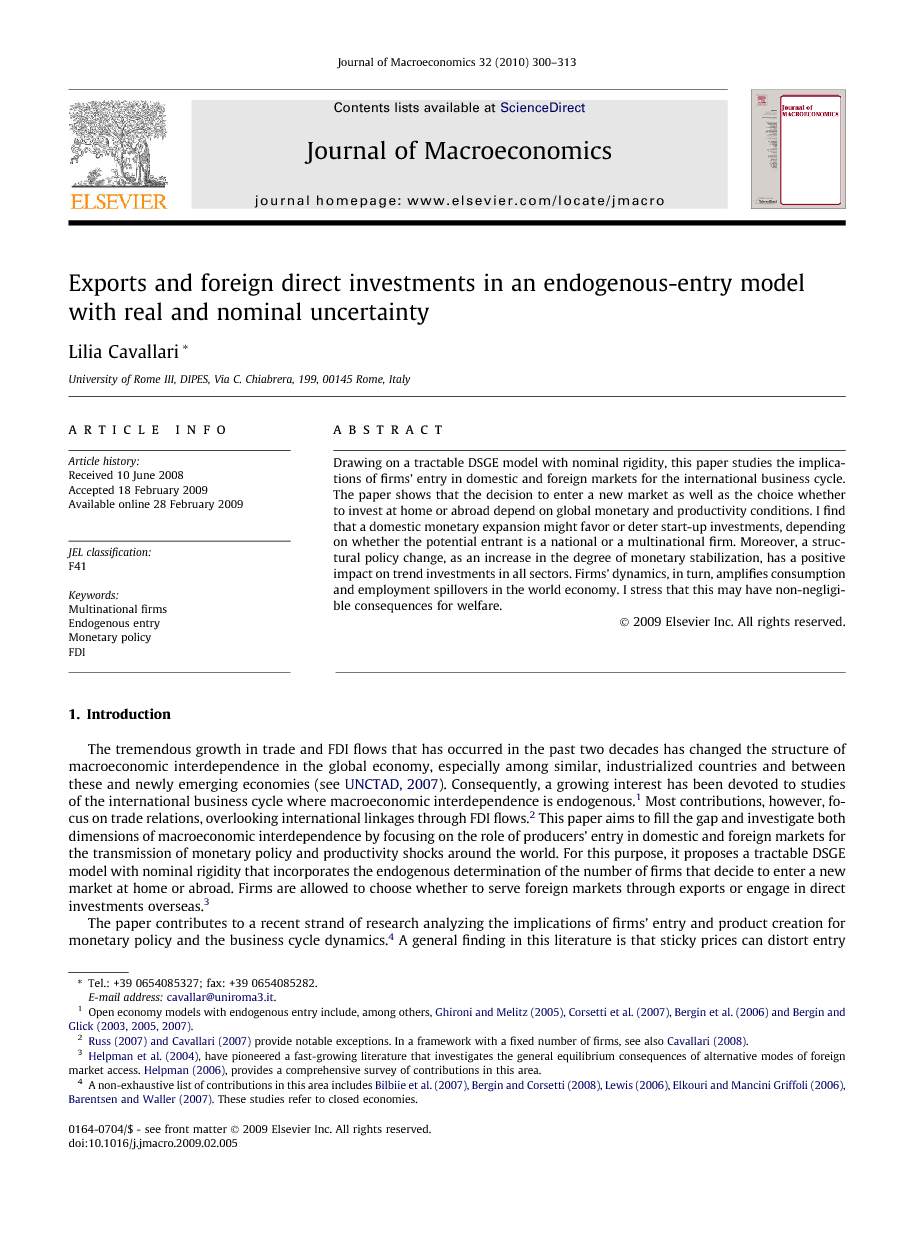 Drawing on a tractable DSGE model with nominal rigidity, this paper studies the implications of firms’ entry in domestic and foreign markets for the international business cycle. The paper shows that the decision to enter a new market as well as the choice whether to invest at home or abroad depend on global monetary and productivity conditions. I find that a domestic monetary expansion might favor or deter start-up investments, depending on whether the potential entrant is a national or a multinational firm. Moreover, a structural policy change, as an increase in the degree of monetary stabilization, has a positive impact on trend investments in all sectors. Firms’ dynamics, in turn, amplifies consumption and employment spillovers in the world economy. I stress that this may have non-negligible consequences for welfare.

This paper has provided a simple DSGE model with nominal rigidity and endogenous entry by national and multinational firms with the aim of exploring the implications of producers’ entry for monetary policy and business cycle dynamics. The main achievements of the paper can be summarized as follows: First, I show that both the decision whether to engage in start-up investments and the choice whether to invest at home or abroad depend on various dimensions of monetary policy. A domestic monetary expansion is found to attract the investments of firms that are not exposed to exchange rate risk, as those operating in markets located in their own country. Foreign direct investments, on the contrary, might be discouraged by exchange rate fluctuations that reduce the value of the overseas assets of multinational enterprises. Moreover, I find that a rise in world monetary volatility as well as the move towards cyclical stabilization may have a positive impact on trend investments in both the traded and the non-traded sector. The result is a consequence of reducing the macroeconomic risks associated with pre-determined prices when a counter-cyclical monetary policy is in place. Second, I find that world-wide productivity conditions can influence not only foreign investments, as one might expect, but also domestic investments. The major role of external shocks in the non-traded sector is a consequence of strictly interdependent investment decisions within and across sectors. Finally, international consumption and employment spillovers are magnified in a setup with endogenous entry as compared with a static framework. I argue that this may have non-negligible consequences for world welfare. In particular, the massive entry of foreign investors in high-productivity economies might turn counter-productive as long as it leads to a sharp deterioration in their terms of trade.