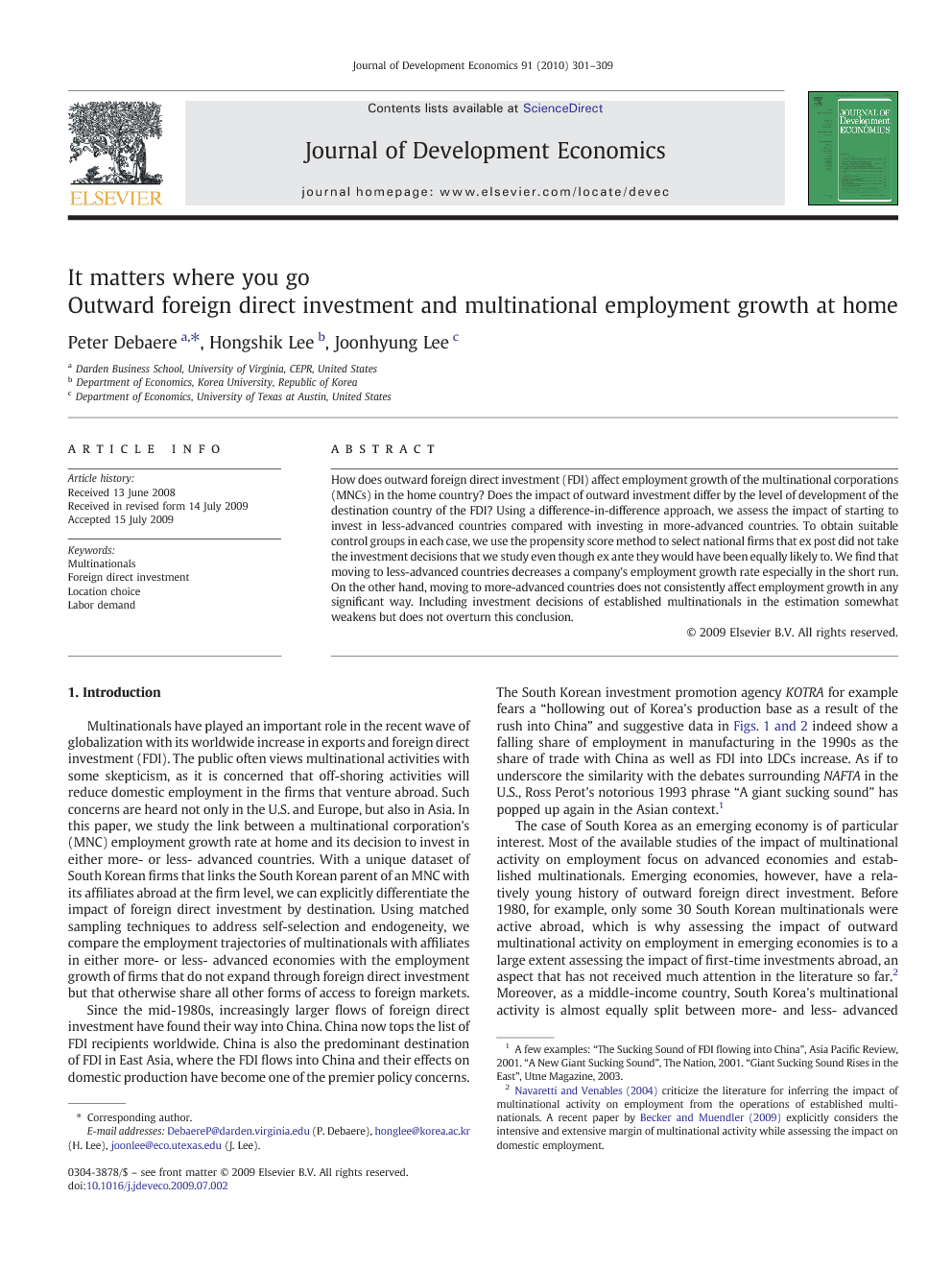 How does outward foreign direct investment (FDI) affect employment growth of the multinational corporations (MNCs) in the home country? Does the impact of outward investment differ by the level of development of the destination country of the FDI? Using a difference-in-difference approach, we assess the impact of starting to invest in less-advanced countries compared with investing in more-advanced countries. To obtain suitable control groups in each case, we use the propensity score method to select national firms that ex post did not take the investment decisions that we study even though ex ante they would have been equally likely to. We find that moving to less-advanced countries decreases a company's employment growth rate especially in the short run. On the other hand, moving to more-advanced countries does not consistently affect employment growth in any significant way. Including investment decisions of established multinationals in the estimation somewhat weakens but does not overturn this conclusion.

We have investigated the effect of outward FDI on home employment for South Korea, an emerging economy. For emerging economies, outward FDI is a recent phenomenon and many new multinationals have come online in recent years. The latter allows us to explicitly study the impact of these new multinationals on employment by comparing the performance of multinationals and non-multinationals, which is largely absent from the literature that has focused mostly on advanced economies with established multinationals. In addition, our particular South Korean dataset lets us directly link the South Korean parent with the particular destination country of its outward FDI. This helps us differentiate the performance of multinationals by whether they set up affiliates in countries that are more or less advanced than South Korea. In doing so, we take advantage of South Korea's position as a middle-income country that has divided its investment almost evenly across more- and less-advanced nations. To address issues of endogeneity and self-selection, we take a difference-in-difference approach with propensity score matching. We go through great lengths to guarantee the quality of the matches between investing and non-investing firms by conditioning on a long list of observables before the investment decision and by testing the quality of the match. To the extent that our matches indeed make the investment decision independent of our classification as a an investing or non-investing firm, our estimates suggest that firms that invest in less-advanced countries pay a short-term price in terms of employment growth. Including subsequent investments does not alter this conclusion. At the same time, our findings for firms that venture into more-advanced countries do not show a consistent tendency. In most instances there is no significant impact. Our findings thus support the public anxiety about multinationals only in the short term and only for investments into less-advanced countries. More importantly, our results suggest that any assessment of the impact of multinational activity on the parents' performance should differentiate by destination. If not, there can be a bias in the obtained results that depends on the destination composition of a country's FDI.