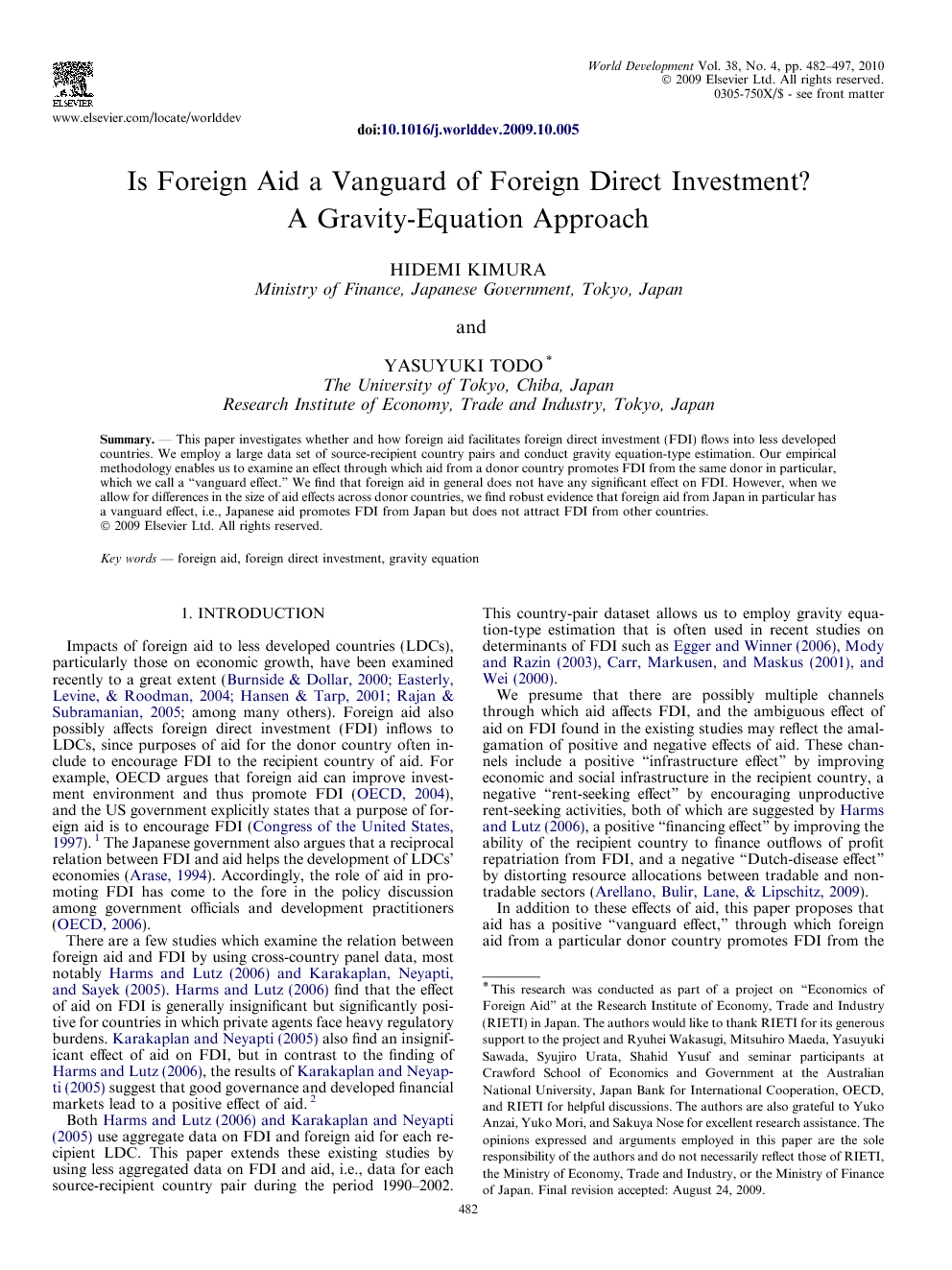 This paper investigates whether and how foreign aid facilitates foreign direct investment (FDI) flows into less developed countries. We employ a large data set of source-recipient country pairs and conduct gravity equation-type estimation. Our empirical methodology enables us to examine an effect through which aid from a donor country promotes FDI from the same donor in particular, which we call a “vanguard effect.” We find that foreign aid in general does not have any significant effect on FDI. However, when we allow for differences in the size of aid effects across donor countries, we find robust evidence that foreign aid from Japan in particular has a vanguard effect, i.e., Japanese aid promotes FDI from Japan but does not attract FDI from other countries.

Impacts of foreign aid to less developed countries (LDCs), particularly those on economic growth, have been examined recently to a great extent (Burnside and Dollar, 2000, Easterly et al., 2004, Hansen and Tarp, 2001 and Rajan and Subramanian, 2005; among many others). Foreign aid also possibly affects foreign direct investment (FDI) inflows to LDCs, since purposes of aid for the donor country often include to encourage FDI to the recipient country of aid. For example, OECD argues that foreign aid can improve investment environment and thus promote FDI (OECD, 2004), and the US government explicitly states that a purpose of foreign aid is to encourage FDI (Congress of the United States, 1997).1 The Japanese government also argues that a reciprocal relation between FDI and aid helps the development of LDCs’ economies (Arase, 1994). Accordingly, the role of aid in promoting FDI has come to the fore in the policy discussion among government officials and development practitioners (OECD, 2006). There are a few studies which examine the relation between foreign aid and FDI by using cross-country panel data, most notably Harms and Lutz, 2006 and Karakaplan and Neyapti, 2005. Harms and Lutz (2006) find that the effect of aid on FDI is generally insignificant but significantly positive for countries in which private agents face heavy regulatory burdens. Karakaplan and Neyapti (2005) also find an insignificant effect of aid on FDI, but in contrast to the finding of Harms and Lutz (2006), the results of Karakaplan and Neyapti (2005) suggest that good governance and developed financial markets lead to a positive effect of aid.2 Both Harms and Lutz, 2006 and Karakaplan and Neyapti, 2005 use aggregate data on FDI and foreign aid for each recipient LDC. This paper extends these existing studies by using less aggregated data on FDI and aid, i.e., data for each source-recipient country pair during the period 1990–2002. This country-pair dataset allows us to employ gravity equation-type estimation that is often used in recent studies on determinants of FDI such as Egger and Winner, 2006, Mody, 2003, Carr et al., 2001 and Wei, 2000. We presume that there are possibly multiple channels through which aid affects FDI, and the ambiguous effect of aid on FDI found in the existing studies may reflect the amalgamation of positive and negative effects of aid. These channels include a positive “infrastructure effect” by improving economic and social infrastructure in the recipient country, a negative “rent-seeking effect” by encouraging unproductive rent-seeking activities, both of which are suggested by Harms and Lutz (2006), a positive “financing effect” by improving the ability of the recipient country to finance outflows of profit repatriation from FDI, and a negative “Dutch-disease effect” by distorting resource allocations between tradable and non-tradable sectors (Arellano, Bulir, Lane, & Lipschitz, 2009). In addition to these effects of aid, this paper proposes that aid has a positive “vanguard effect,” through which foreign aid from a particular donor country promotes FDI from the same donor country but not from other countries. For example, if aid for infrastructure from Japan to Thailand facilitates FDI flows from the United States to Thailand, this might be because the Japanese aid has an infrastructure effect. However, if aid from Japan to Thailand promotes FDI from Japan in particular without affecting FDI from other countries, we conclude that the Japanese aid has a vanguard effect. There may be several reasons for this vanguard effect. First, when foreign aid is provided, information on the local business environment of the recipient country can be exclusively transmitted to firms of the donor country. Second, the fact that the government provides aid may reduce the recipient country’s investment risks perceived subjectively by firms of the donor country. Third, aid may bring the donor country-specific business practices, rules, and institutions into recipient countries. Those effects of foreign aid should promote FDI from the same donor country but does not necessarily promote FDI from other countries. We isolate the vanguard effect of aid from other effects by estimating the effect of aid from a particular donor country, rather than the total aid from all donor countries, on FDI from the donor. It should be emphasized that the use of country-pair data enables us to investigate the vanguard effect, and thus the distinction of the vanguard effect of aid on FDI from other effects is a major contribution of this paper. Empirical investigation of the vanguard effect is important in practice, since aid is often motivated by the donor country’s willingness to encourage FDI from the donor, as we noted earlier. In addition, we distinguish between aid for infrastructure and aid for other purposes to examine possible differences in the size of aid effects between the two types of aid, since the two types may differently affect each type of effect of aid explained earlier. The distinction between the two types of aid has also not been done in the existing studies. To preview the results, we find that foreign aid in general does not necessarily promote FDI, a result consistent with Harms and Lutz, 2006 and Karakaplan and Neyapti, 2005. We also find that either aid for infrastructure or for non-infrastructure has no significant impact on FDI. As to the final role of foreign aid on FDI, the vanguard effect, we find no general evidence of such effect. We then further examine possible differences in the size of the impact of aid among donor countries. Our results show that foreign aid for infrastructure from Japan has a vanguard effect, while the effect of aid from all other countries on FDI seems to be absent. In other words, infrastructure aid from Japan promotes FDI from Japan to the recipient country of aid, while having no impact on FDI from other countries to the recipient.3 The size of the vanguard effect for Japanese aid is large, since our results imply that 6% of Japanese FDI in East Asia during the period 1990–2002 is attributed to Japanese aid. The rest of the paper is organized as follows. Section 2 specifies the econometric model, whereas Section 3 describes the data and variables. Section 4 shows the estimation results, which is followed by concluding remarks in Section 5.

This paper investigates whether and how foreign aid facilitates FDI flows into LDCs, applying data for each source-recipient country pair to gravity equation-type estimation. Our empirical methodology enables us to distinguish between standard effects of aid, including the infrastructure, rent-seeking, financing, and Dutch-disease effects, and the vanguard effect through which aid from a donor country promotes FDI from the donor in particular. Possible reasons for the vanguard effect are that aid could transmit tacit information on the business environment of the recipient country, reduce country risk with the provision of a quasi government guarantee, and set donor country-specific business standards in advance of private investment. Our results indicate that foreign aid in general does not necessarily have a significant effect. However, when we allow for differences in the size of aid effects across donors, we find robust evidence that infrastructure aid from Japan has a vanguard effect. In other words, Japanese aid promotes FDI from Japan, while having no impact on FDI from other countries. Our results may lead to two opposing views toward Japanese aid. On the one hand, since the existing studies found a possible link between FDI and income growth under certain conditions,31 our results imply that Japanese aid may have helped at least some of its recipient countries raise their income level indirectly by encouraging Japanese FDI to the recipients. This view is in fact supported by the Japanese government, which argues that provision of a “trinity,” the combination of FDI, trade, and aid, is helpful in developing LDCs’ economies (Arase, 1994) and hence that Japanese FDI promoted by aid is beneficial not only to Japanese firms but also to LDCs. Based on this argument, the Ministry of Economy, Trade and Industry (METI) of Japan advocates experiences of Japan’s economic cooperation in East Asia as the successful “Japan’s ODA (official development assistance) model” (METI, 2006). On the other hand, the same results can suggest that Japanese aid is aimed at the provision of business opportunities to Japanese firms, rather than the reduction of poverty in LDCs. Then, a possible policy implication from the empirical evidence is that the Japanese government should modify the focus of Japanese aid toward more direct channels of poverty alleviation. Unfortunately, however, the present paper cannot clearly indicate which view fits the actual role of Japanese aid in economic growth in LDCs, since our analysis is limited to the aid-FDI nexus and does not cover the aid-growth nexus through FDI. We expect that future studies can fill the missing link between the aid-FDI nexus and the FDI-growth nexus. Finally, an important caveat of this study should be mentioned. In this study, we incorporated differences in aid effects between donors and between aid for infrastructure and for non-infrastructure. However, aid effects may depend on other factors, such as economic and social conditions of the recipient country, and modality and volatility of aid. These issues are beyond the scope of this paper and should be examined in further studies.