عنوان انگلیسی
The determinants of foreign direct investment in China: The case of Taiwanese firms in the IT industry
دانلود فوری مقاله + سفارش ترجمه 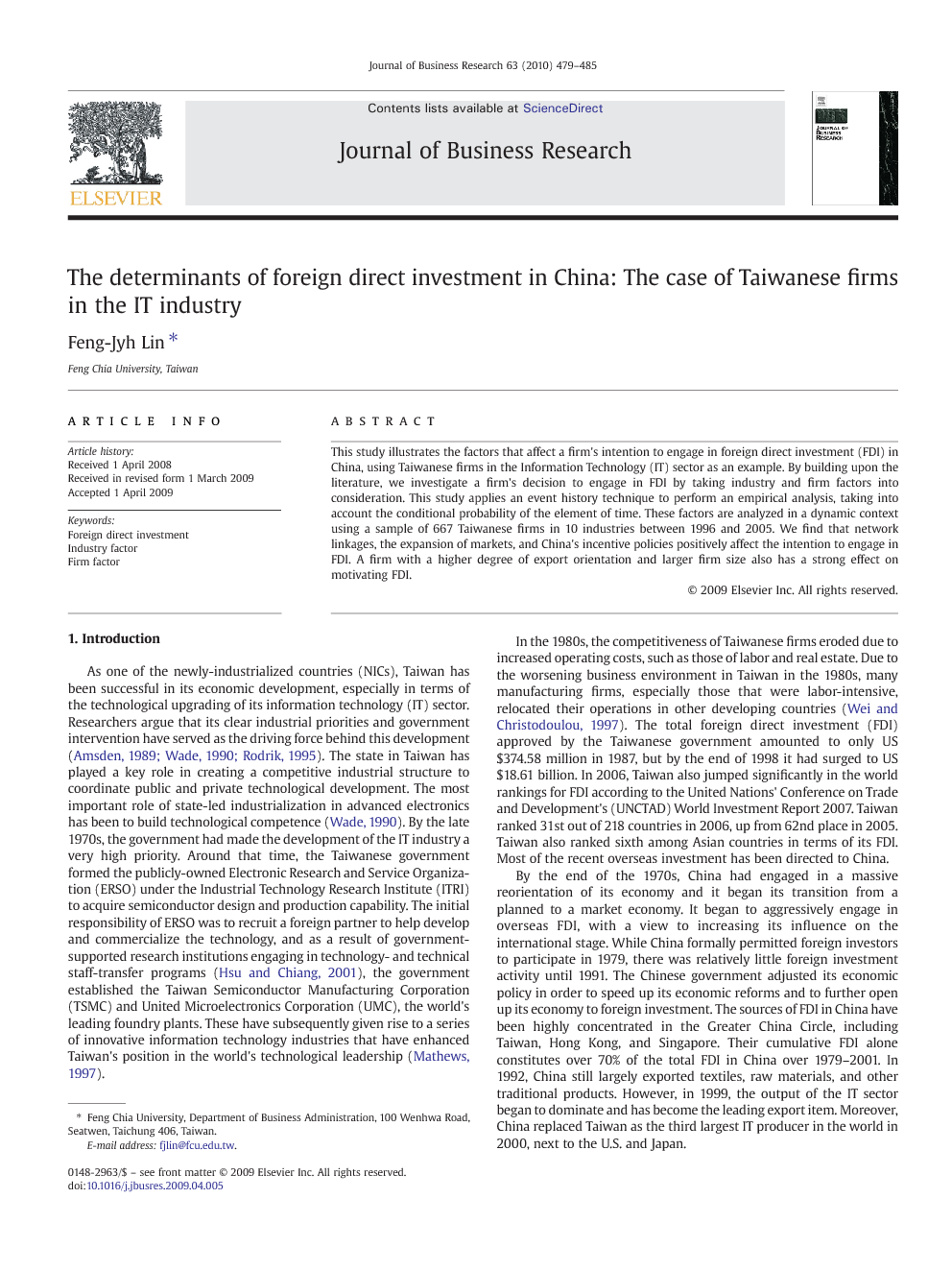 This study illustrates the factors that affect a firm's intention to engage in foreign direct investment (FDI) in China, using Taiwanese firms in the Information Technology (IT) sector as an example. By building upon the literature, we investigate a firm's decision to engage in FDI by taking industry and firm factors into consideration. This study applies an event history technique to perform an empirical analysis, taking into account the conditional probability of the element of time. These factors are analyzed in a dynamic context using a sample of 667 Taiwanese firms in 10 industries between 1996 and 2005. We find that network linkages, the expansion of markets, and China's incentive policies positively affect the intention to engage in FDI. A firm with a higher degree of export orientation and larger firm size also has a strong effect on motivating FDI.

As one of the newly-industrialized countries (NICs), Taiwan has been successful in its economic development, especially in terms of the technological upgrading of its information technology (IT) sector. Researchers argue that its clear industrial priorities and government intervention have served as the driving force behind this development (Amsden, 1989, Wade, 1990 and Rodrik, 1995). The state in Taiwan has played a key role in creating a competitive industrial structure to coordinate public and private technological development. The most important role of state-led industrialization in advanced electronics has been to build technological competence (Wade, 1990). By the late 1970s, the government had made the development of the IT industry a very high priority. Around that time, the Taiwanese government formed the publicly-owned Electronic Research and Service Organization (ERSO) under the Industrial Technology Research Institute (ITRI) to acquire semiconductor design and production capability. The initial responsibility of ERSO was to recruit a foreign partner to help develop and commercialize the technology, and as a result of government-supported research institutions engaging in technology- and technical staff-transfer programs (Hsu and Chiang, 2001), the government established the Taiwan Semiconductor Manufacturing Corporation (TSMC) and United Microelectronics Corporation (UMC), the world's leading foundry plants. These have subsequently given rise to a series of innovative information technology industries that have enhanced Taiwan's position in the world's technological leadership (Mathews, 1997). In the 1980s, the competitiveness of Taiwanese firms eroded due to increased operating costs, such as those of labor and real estate. Due to the worsening business environment in Taiwan in the 1980s, many manufacturing firms, especially those that were labor-intensive, relocated their operations in other developing countries (Wei and Christodoulou, 1997). The total foreign direct investment (FDI) approved by the Taiwanese government amounted to only US$374.58 million in 1987, but by the end of 1998 it had surged to US$18.61 billion. In 2006, Taiwan also jumped significantly in the world rankings for FDI according to the United Nations' Conference on Trade and Development's (UNCTAD) World Investment Report 2007. Taiwan ranked 31st out of 218 countries in 2006, up from 62nd place in 2005. Taiwan also ranked sixth among Asian countries in terms of its FDI. Most of the recent overseas investment has been directed to China. By the end of the 1970s, China had engaged in a massive reorientation of its economy and it began its transition from a planned to a market economy. It began to aggressively engage in overseas FDI, with a view to increasing its influence on the international stage. While China formally permitted foreign investors to participate in 1979, there was relatively little foreign investment activity until 1991. The Chinese government adjusted its economic policy in order to speed up its economic reforms and to further open up its economy to foreign investment. The sources of FDI in China have been highly concentrated in the Greater China Circle, including Taiwan, Hong Kong, and Singapore. Their cumulative FDI alone constitutes over 70% of the total FDI in China over 1979–2001. In 1992, China still largely exported textiles, raw materials, and other traditional products. However, in 1999, the output of the IT sector began to dominate and has become the leading export item. Moreover, China replaced Taiwan as the third largest IT producer in the world in 2000, next to the U.S. and Japan. Taiwanese small and medium enterprises (SMEs) in the traditional sectors, such as those in footwear and garments, first went to China. A decade later, in the mid-1990s, the majority of investment shifted to the information technology sector, especially personal computer components and peripherals. Taiwan has long limited investments in China by domestic chip makers because of concerns that their technologies might be used by the Chinese military. However, the government of Taiwan has more recently approved plans by chip makers to invest in China. This signals a significant relaxing of regulations for the Taiwanese IT industry. According to statistics compiled by the Ministry of Economic Affairs' Investment Commission in Taiwan, investment in China amounting to $13.97 billion hit a record high in 2006. Total IT industry FDI in China now accounts for over one third of FDI in China. The record number of Taiwanese investment projects going to China also reflects a trend towards larger-scale investment. This raises an interesting question. What factors drive the large amount of Taiwanese IT industry FDI in China? By building upon the literature, we investigate a firm's decision to undergo FDI by taking both industry and firm factors into consideration. This study applies an event history technique to perform an empirical analysis, taking into account the conditional probability of the element of time. We examine the longitudinal data of 667 Taiwanese firms that belonged to 12 distinctive IT industries between 1996 and 2005. A unique feature of this study is that the data cover a large cross-industry of firms, thereby allowing us to investigate both firm and industry characteristics that induce FDI in China. By analyzing panel data covering a long time span in a dynamic context, we can investigate the process of a firm's learning and how learning affects subsequent movements in FDI. The remainder of this paper is organized as follows. Section 2 examines the existing literature in order to develop a model that captures the effects of the motivation underlying FDI in China. Section 3 describes the data and the hazard rate approach, while taking into consideration the conditional probability of the element of time. Section 4 presents the empirical results. In Section 5, we draw implications from the findings.

Taiwan is one of the world's largest outbound investors. Although Taiwan began investing abroad in the late 1950s, the volume of its FDI did not increase significantly until the late 1980s. Taiwan also adopted a competitive industrial policy to secure the rapid maturation of its protected industries, starting with the labor-intensive textile industry in the 1960s and following this with the high-tech IT industry in the 1980s. For the past ten years, Taiwan's technology-intensive industries, such as its semiconductor and computer manufacturing industries, have become increasingly important. As China has opened up its economy to the outside world, Taiwanese firms in the IT industry have increasingly invested in China. However, the factors that have significantly motivated Taiwanese firms in the IT industry to invest in China remain unexplained in the existing literature. This study divides the factors influencing the FDI decisions of Taiwanese firms in the IT industry into the industry-level factors and firm-level factors. A “time” dimension is also incorporated to employ an event history technique for the dynamic process of FDI. There are limitations to this study. The generalization of the results based on data obtained from government publications requires some caution. These data clearly underestimate the volume of Taiwan's investment in China. This can be seen by comparing the number of projects and amounts listed by the Taiwanese government with those listed by the Chinese authorities. In addition, due to the data constraints, some of the important variables in this analysis are only available for a particular year. Our findings show strong support for the view that industry-level factors affect the rate at which FDI takes place in China. Two of the firm-level factors (export orientation and firm size) support our prediction. The results of this study suggest that further investigation of the effects of industry and firm factors on a firm's decisions to engage in FDI is soundly warranted. In addition, a further survey of industries other than the IT industry would be particularly worthwhile in future research. This study incorporates variables based on a review of the literature, and so we hope this study will stimulate further research based on new variables.