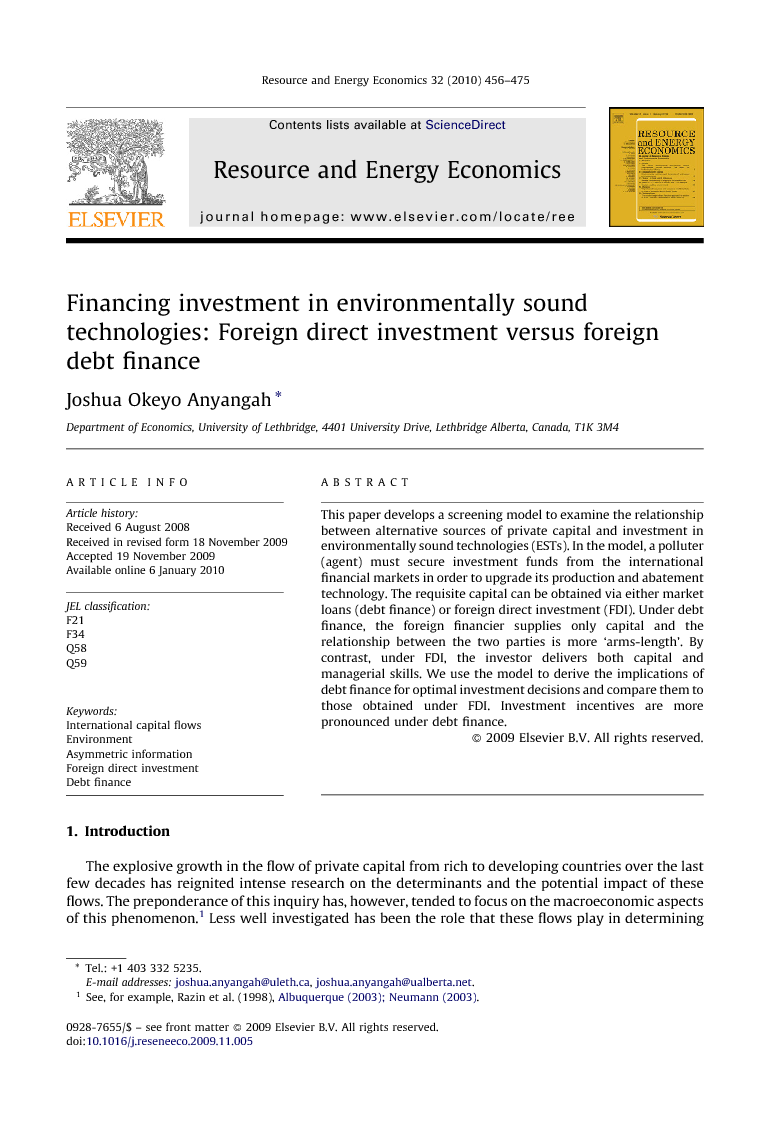 This paper develops a screening model to examine the relationship between alternative sources of private capital and investment in environmentally sound technologies (ESTs). In the model, a polluter (agent) must secure investment funds from the international financial markets in order to upgrade its production and abatement technology. The requisite capital can be obtained via either market loans (debt finance) or foreign direct investment (FDI). Under debt finance, the foreign financier supplies only capital and the relationship between the two parties is more ‘arms-length’. By contrast, under FDI, the investor delivers both capital and managerial skills. We use the model to derive the implications of debt finance for optimal investment decisions and compare them to those obtained under FDI. Investment incentives are more pronounced under debt finance.

This paper has developed a screening model to illustrate the relationship between alternative forms of international private financing and the optimal investment in clean technology. The model is based on a simple asymmetric informational problem (comprising both adverse selection and moral hazard) between a domestic agent and a foreign investor. We have characterized the optimal level of investment under debt finance and foreign direct investment. Debt finance involves the supply of capital alone; consequently, all the informational problems occur on the part of the domestic agent. By contrast, FDI involves the supply of both capital, and organization and management skills. Thus, unlike previous modelling of capital flows that suppress asymmetric informational problems on the part of the investor, the optimal contract under FDI is structured to deal with both the agent’s information problems and the investor’s own incentive problems. Consistent with the canonical literature, we show that the first-best outcome of full information efficiency of investment and effort is generally not achievable when contracting takes place between parties that are asymmetrically informed about a relevant parameter. Under debt finance, the moral hazard problem is completely resolved, but investment is distorted away from its full information level due to the agent’s private information. By contrast, under FDI, the adverse selection persists and the moral hazard problem (on the part of the investor) is never eliminated. Hence, FDI amplifies the agency problem and results in more intense distortion of pollution control investment decisions. These results could be extended in a variety of ways. The model assumes that both the investor and the agent are risk neutral. Risk neutrality for the agent is questionable in this context, however, because agents are unlikely to possess a portfolio of similar projects spread across the developing world. Thus, a deeper exploration of the impact of financing mechanism might involve an examination of the effects of risk preferences. A second possible objection to this model is that it assumes that debt contract precludes the investor from exercising control over the firm. In reality, an investor may intervene even under a debt arrangement by threatening to terminate funding if the firm’s performance is not satisfactory. These lines of thought are beyond the scope of this study and are left for further research.