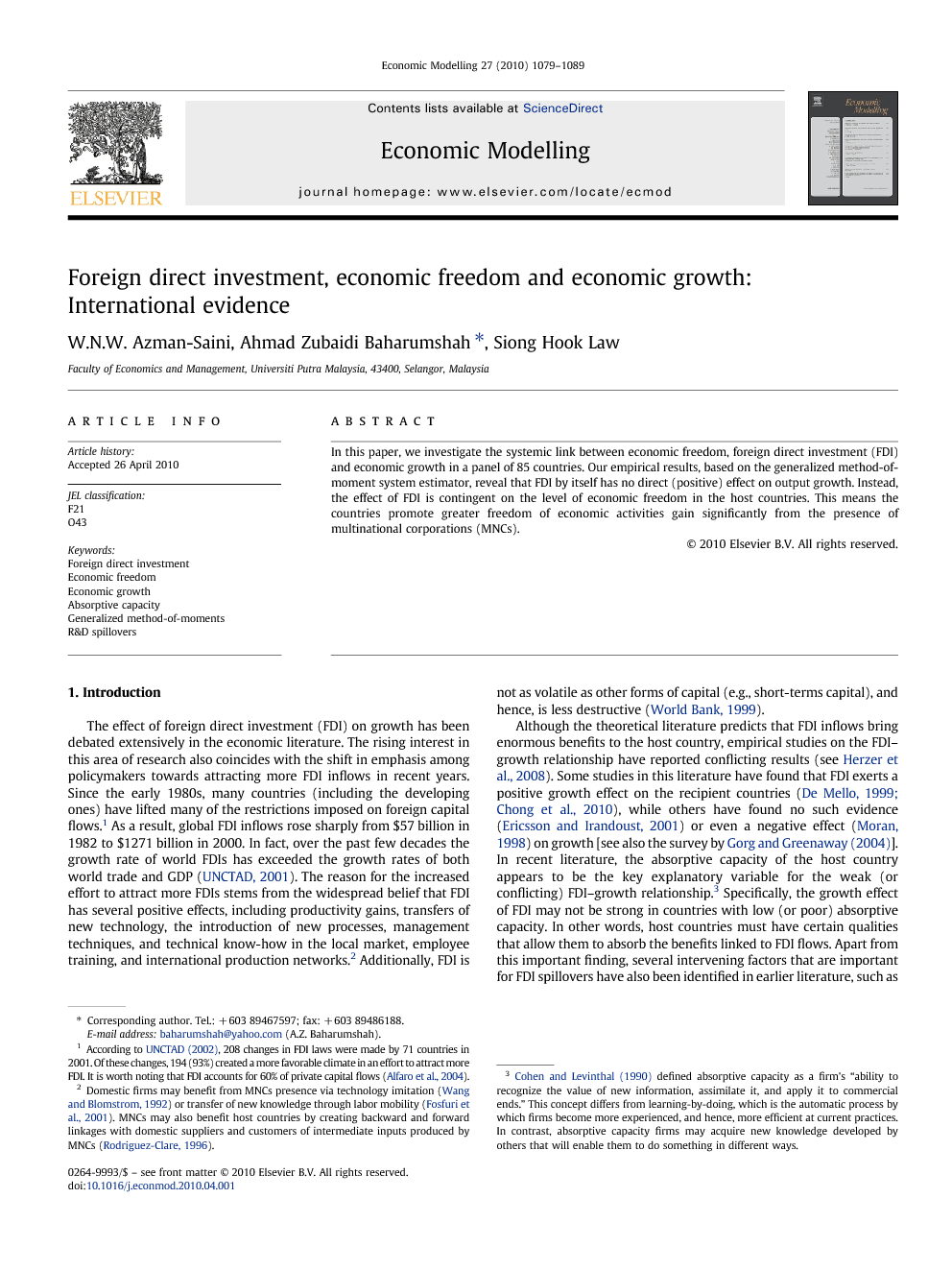 In this paper, we investigate the systemic link between economic freedom, foreign direct investment (FDI) and economic growth in a panel of 85 countries. Our empirical results, based on the generalized method-of-moment system estimator, reveal that FDI by itself has no direct (positive) effect on output growth. Instead, the effect of FDI is contingent on the level of economic freedom in the host countries. This means the countries promote greater freedom of economic activities gain significantly from the presence of multinational corporations (MNCs).

The effect of foreign direct investment (FDI) on growth has been debated extensively in the economic literature. The rising interest in this area of research also coincides with the shift in emphasis among policymakers towards attracting more FDI inflows in recent years. Since the early 1980s, many countries (including the developing ones) have lifted many of the restrictions imposed on foreign capital flows.1 As a result, global FDI inflows rose sharply from $57 billion in 1982 to $1271 billion in 2000. In fact, over the past few decades the growth rate of world FDIs has exceeded the growth rates of both world trade and GDP (UNCTAD, 2001). The reason for the increased effort to attract more FDIs stems from the widespread belief that FDI has several positive effects, including productivity gains, transfers of new technology, the introduction of new processes, management techniques, and technical know-how in the local market, employee training, and international production networks.2 Additionally, FDI is not as volatile as other forms of capital (e.g., short-terms capital), and hence, is less destructive (World Bank, 1999). Although the theoretical literature predicts that FDI inflows bring enormous benefits to the host country, empirical studies on the FDI–growth relationship have reported conflicting results (see Herzer et al., 2008). Some studies in this literature have found that FDI exerts a positive growth effect on the recipient countries (De Mello, 1999 and Chong et al., 2010), while others have found no such evidence (Ericsson and Irandoust, 2001) or even a negative effect (Moran, 1998) on growth [see also the survey by Gorg and Greenaway (2004)]. In recent literature, the absorptive capacity of the host country appears to be the key explanatory variable for the weak (or conflicting) FDI–growth relationship.3 Specifically, the growth effect of FDI may not be strong in countries with low (or poor) absorptive capacity. In other words, host countries must have certain qualities that allow them to absorb the benefits linked to FDI flows. Apart from this important finding, several intervening factors that are important for FDI spillovers have also been identified in earlier literature, such as the quality of human capital, the development of financial markets, and trade policy.4 In an effort to further understand the nature of the FDI–growth nexus, this paper draws from recent literature that highlighted the importance of institutions in the growth process. In particular, our research emphasizes the importance of freedom of economic activities in mediating FDI spillovers to help answer these questions. Our argument is simply based on the fact that the lack of economic freedom can limit a firm's (or nation's) ability to absorb and internalize new technology from multinational corporations (MNCs) (i.e., foreign presence) and contribute to host country's economic growth. To date, the literature has emphasized the quality of institutions and economic freedom, but the focus has been primarily on the direct effect on economic growth. Hence, this is not the first article that examines the role of economic freedom in wealth creation.5 In this paper, we utilize the index of economic freedom (EF, hereafter) provided by the Fraser Institute to establish the potential link between EF and growth. The index is a measure of institutional quality that provides insight into the characteristics of an environment conducive to prosperity. A glance at the index components reveals several reasons to expect that countries with higher levels of EF will have greater absorptive capacity, and thus allow them to reap more benefits from FDI spillovers. First, there is broad agreement within the profession that, in general, less regulation would be good for economic progress. It is well known that a free and competitive market provides greater opportunities for entrepreneurs to try out new ideas. It also encourages firms to engage in risky ventures such as FDI-related activities, in search of higher returns for their investment. On the other hand, if the market is extensively regulated, it will not function well, and hence the allocation of resources would be adversely affected in such an environment. For example, if financial markets are extensively regulated, FDI-related activities will be affected as firms need external funds to finance the adoption of new technology (Alfaro et al., 2004). Second, labor laws for hiring and firing of employees may also have implications for FDI spillovers. If the laws are very restrictive, managers and workers who were trained by MNCs with new technology or management techniques may find it difficult to join local firms. This may limit spillover effects through labor mobility as emphasized in Fosfuri et al. (2001). Third, the protection of property rights is another integral element of EF. Countries providing better property rights protection are expected to benefit more from MNCs presence because they can attract FDI of a higher technological content (Javorcik, 2004), and they also more likely to encourage MNCs to expand their research and development (R&D) activities locally (Nunnenkamp and Spatz, 2004). Finally, freedom of exchange across borders may help domestic firms to penetrate international markets for exporting purposes (Aitken et al., 1997). In short, there are strong reasons to believe that countries with higher levels of freedom have greater absorptive capacity and are therefore more likely to benefit from the MNCs' presence.6 In addition to examining a new aspect of absorptive capacity, this paper contributes to the present literature by applying panel estimation procedures. It departs from the existing studies by using the dynamic panel data technique. To the best of the authors' knowledge, all of the existing studies on absorptive capacity have relied mainly on the cross-sectional estimation technique.7 In this paper, we employ a more advanced dynamic panel econometric technique that formally addresses country-specific effects and simultaneity bias. The method relies on the generalized method-of-moment (GMM) estimator, which has a number of advantages over the cross-section estimator. The remainder of the paper is structured as follows. Section 2 provides a brief review of the literature while Section 3 outlines the model specification. Section 4 explains the methodology. Section 5 highlights the data and empirical strategy. Section 6 reports the empirical results and their interpretation. Conclusions and summary are presented in Section 7.

Numerous researchers have investigated the impact of FDI on economic growth. Unfortunately, the empirical literature has produced conflicting conclusions. In more recent studies, the absorptive capacity of the recipient countries appears to be the key explanation for this ambiguity. The main purpose of this paper is to investigate a new aspect of absorptive capacity, namely EF. Specifically, this paper assesses whether the marginal impact of FDI on growth depends on the freedom of economic activities in the host countries. Using a panel data for 85 countries over the 1975–2004 period, we draw three important conclusions from the empirical analysis. First, as in earlier studies, we find that FDI by itself has no direct impact on output growth. Second, EF is found to be an important driver for long-run growth for the countries considered. The positive correlation (direct link) between EF and growth is also consistent with the findings reported in De Haan and Sturm, 2000 and Sturm and De Haan, 2001, to mention two. Finally, as it is shown in the empirical evidence, the impact of FDI on growth is contingent on the level of EF. We find that the countries under review (including the developing countries) that promote freedom of economic activities gain significantly from the MNCs' presence. In these countries, firms can more easily absorb and adopt new technology and other benefits associated with FDI inflows. This also explains why the benefits accrued from acquisition FDI and their association with foreign multinationals with performance advantage is higher for some countries and not others. We consider this is an important result as it suggests that EF is an important element of the nation's absorptive capacity, but it has been somewhat ignored in earlier studies. In this respect, policymakers should weigh the cost of policies aimed at attracting FDI versus those that seek to improve the level of EF. Policy strategies directed towards attracting FDI should be in conjunction with, rather than precede, policies promoting better freedom of economic activities, because more freedom is likely to deliver greater benefits. Countries that have not done so will lose out in the race. Policymakers should create policies transparent enough for potential investors before using other measures for attracting higher levels of FDI. However, the reforms can be an arduous process and requires a long-term commitment. In some countries, they may be politically difficult in the short run but the long-run economic benefits can be tremendous. Further analysis using the index components revealed that security of property rights, freedom to exchange, and market regulations are all important elements of a nation's absorptive capacity. A closer examination suggests the security of property rights and legal structure can be improved by promoting judicial independence, establishing a trusted legal framework for private businesses to challenge the legality of government actions, and reducing military interference in the rule of law and the political process. In order to improve the quality of freedom of exchange, policymakers should place more efforts to reduce tariff and non-tariff trade barriers to allow imports of intermediate inputs. Such an option not only allows domestic firms to penetrate international markets, but also helps them to be more competitive at the global level. Government needs to improve regulations governing business activities by easing the process of business startups, reducing government bureaucracy, price control and other rent-seeking activities. The labor market can be improved, for instance, by easing firing and hiring procedures. Credit markets can be further enhanced by reducing government participation in capital allocation. Establishing a competitive banking environment, directing more credit to the private sector, and avoiding interest rate control will lead to greater spillover effects from MNCs. Despite these important findings, some caveats are in order. One limitation is that the interaction term in our main specification forces the impact of FDI on growth to increase (or decrease) monotonically with the level of EF. However, it may be the case that a certain level of EF is required before FDI can have any impact on host countries. As noted by World Bank (2001) and others, only countries with the greatest absorptive capacity are likely to benefit from the presence of foreign capital. In countries with low absorptive capacity, the benefits of FDI are muted or non-existent. This suggests the need for a more flexible specification that can accommodate different types of interactions between FDI, output growth, and economic freedom. One possible solution is to employ a regression model based on the concept of threshold effects to capture the presence of contingency effects (see for example Girma, 2005). We leave this possibility for future research.