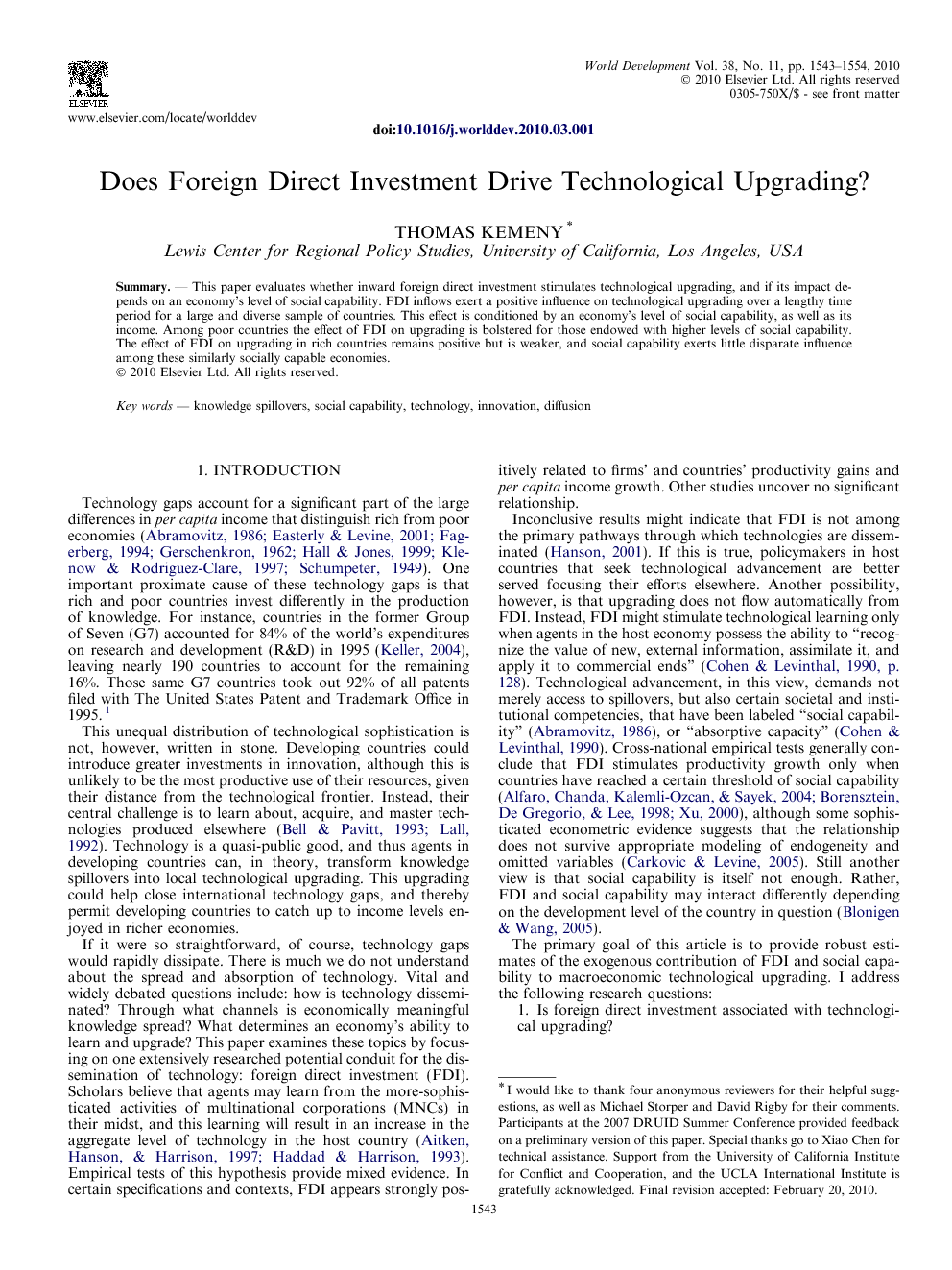 Scholars believe that foreign direct investment stimulates international technology diffusion, as host-country agents learn and upgrade through demonstration effects, labor mobility, and buyer–supplier links with comparatively advanced MNCs. Macroeconomic tests of this hypothesis have focused on the extent to which the transformation of FDI into technological gains depends on an economy’s social capability. These studies generally find confirmatory evidence, though the relationship appears less robust after accounting for endogeneity and omitted variables. My analysis adds value in several ways. I employ a novel indicator of technology that evaluates the technological sophistication of an economy on the basis of the goods it exports to the United States. I also construct a broader measure of social capability than has been used to examine these relationships. Additionally, I apply a system GMM estimator that provides efficient estimates of the exogenous contributions of FDI and social capability to technological upgrading. I find that FDI is positively associated with technological upgrading. However, it has a disparate impact that depends on an economy’s level of development and social capability. In lower-income countries, the effect of FDI on technological upgrading is considerably stronger among those endowed with higher levels of social capability. Low- and lower-middle-income countries that have a well-educated workforce, effective communication infrastructure, greater trust, and effective economic, social and political institutions appear better able to catalyze MNC activity into host-country upgrading. With these institutions in place, they can master technologies that are new to them, which ultimately permits them to expand the range of goods they are able to produce at a globally-competitive level. Among upper-middle- and high-income countries, the small positive relationship between FDI inflows and technological upgrading tends to proceed with little regard to social capability. That being said, there is little diversity in levels of social capability among group members: the group is nearly uniform in its high degree of social capability. Crucially, and in line with Blonigen and Wang (2005), this interaction between social capability and FDI is hidden if all countries across the income spectrum are lumped together during estimation. These findings accord with early econometric studies relating FDI and social capability, and generally fit theoretical expectations from the abundant and diverse literature on absorptive capacity, technological capability, innovation systems and, of course, social capability. Technological absorption is not an automatic phenomenon. Instead, it demands societal institutions of the type measured here. Results from this article also fit recent evidence from firm-level studies that suggest that the effect of FDI on host-country productivity may strongly depend on where one looks for impacts: which sorts of countries; within or between sectors; and within gross investments to distinguish their quality and purpose. In an ideal situation, I could disaggregate the country-level FDI inflows examined here to be able to distinguish the type and quality of investments in different locales, and thereby to better relate this article’s results with the firm-level literature. Unfortunately, data limitations prevent the achievement of this goal at present. The results in this article also hint at the possibility that the diffusion and absorption of new ideas proceed through different mechanisms in economies at varying levels of development. While FDI appears to disseminate ideas to less-developed economies at certain levels of social capability, other conduits and other institutions might foster learning among upper-middle- and high-income countries. Further tests should more directly investigate this hypothesis.