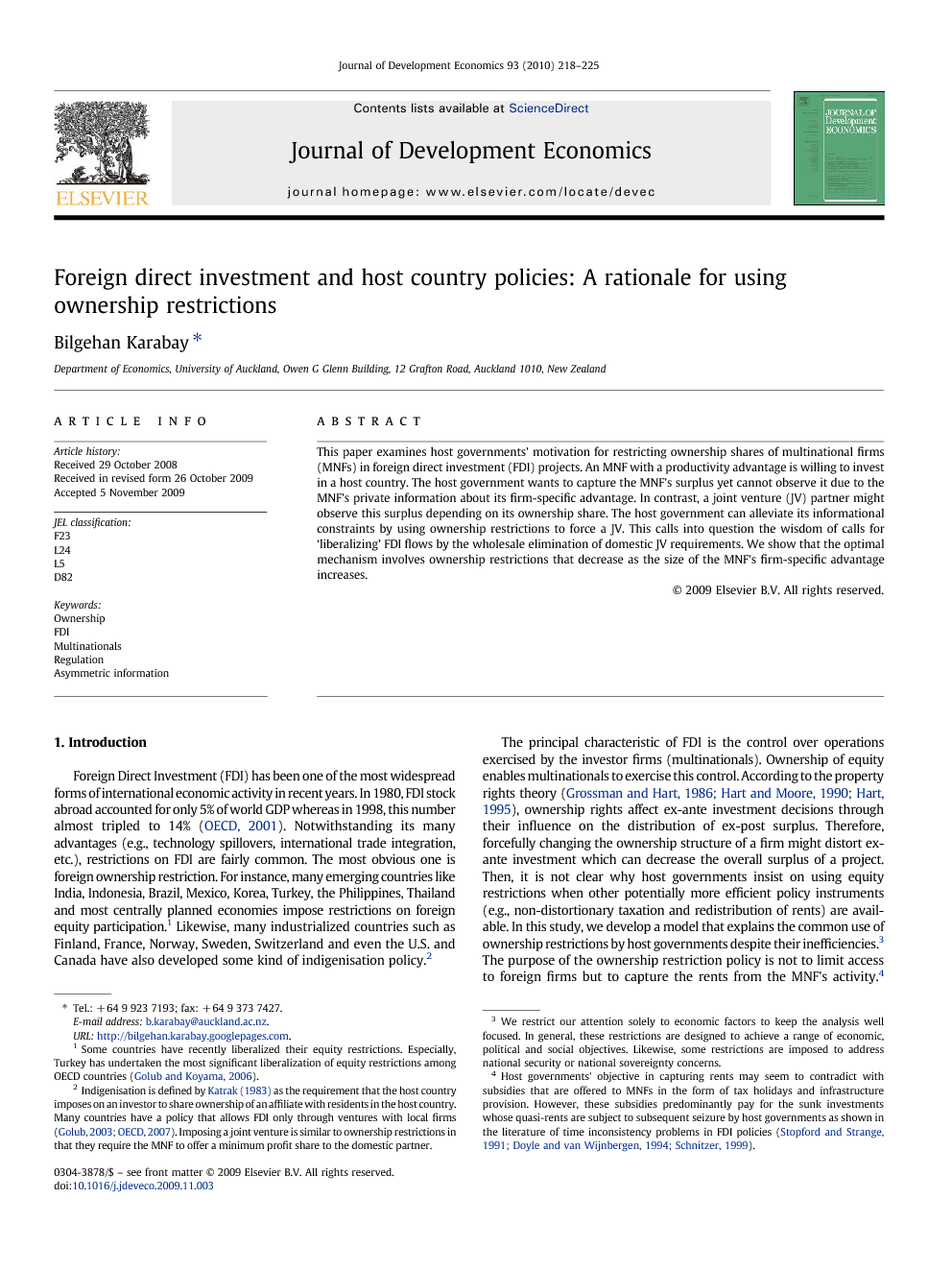 This paper examines host governments' motivation for restricting ownership shares of multinational firms (MNFs) in foreign direct investment (FDI) projects. An MNF with a productivity advantage is willing to invest in a host country. The host government wants to capture the MNF's surplus yet cannot observe it due to the MNF's private information about its firm-specific advantage. In contrast, a joint venture (JV) partner might observe this surplus depending on its ownership share. The host government can alleviate its informational constraints by using ownership restrictions to force a JV. This calls into question the wisdom of calls for ‘liberalizing’ FDI flows by the wholesale elimination of domestic JV requirements. We show that the optimal mechanism involves ownership restrictions that decrease as the size of the MNF's firm-specific advantage increases.

There is little doubt that the general trend on FDI has been towards liberalization, especially in the past two decades. Many countries have reduced restrictions on FDI and adopted incentives to encourage FDI. Still, some restrictions remain in place even in countries that generally welcome FDI. The most obvious restriction on FDI is the foreign ownership restriction. In this study, we provide one possible explanation on the widespread use of this type of restriction. We show that, under incomplete information, ownership restrictions can be welfare-improving by reducing the information problem of the host government. Under the optimal mechanism, the host government is more lenient towards the MNF as its productivity (represented by the firm-specific advantage) is higher. This is the result of rent extraction-efficiency trade-off. For low values of the firm-specific advantage, the cost of restricting the MNF's ownership share (efficiency effect) is low and as a result, the ownership restriction is high. Yet, for high values of the firm-specific advantage, this cost increases. (Efficiency effect dominates the rent extraction effect.) Consequently, the ownership restriction is low. In FDI literature, it is often claimed that removing barriers would increase FDI flows. Notwithstanding, the information base and tools for analysis of FDI barriers are very limited. First of all, the measurement of restrictions is tricky. This is true even for relatively direct types of restrictions such as foreign ownership restrictions where different limits applying to different firms in a sector, to different types of foreign investors, and to individual and aggregate foreign investment. Furthermore, there is no international agreement on standardized reporting of policies on FDI with the partial exception of GATS schedules, which in itself is problematic. GATS commitments are based on a “positive list”25 approach and hence do not take into account sectors and restrictions which are unscheduled. In other words, a positive commitment in some sectors does not necessarily imply a restriction. A country may simply choose not to list a particular sector in its schedule to retain policy flexibility. Besides, it is hard to classify and rank various restrictions. When evaluating the effects of different types of restrictions, it is desirable to assign weights to them according to their significance, however, this procedure yields arbitrary judgements and errors. In addition, governments have altered their policies frequently in recent years and consequently it is not easy to obtain up-to-date information. To overcome this difficulty, surveys and questionnaires were used to obtain information but the reliability of them is open to question. It is possible that some countries are just more forthcoming than others in reporting their restrictions and thus they receive higher restrictive scores not because they are more restrictive but because they are more complete in their reporting. As a result, to develop a clearer picture of the implications of FDI barriers and the possible gains from further liberalization, more information is needed on the nature and extent of the existing barriers.