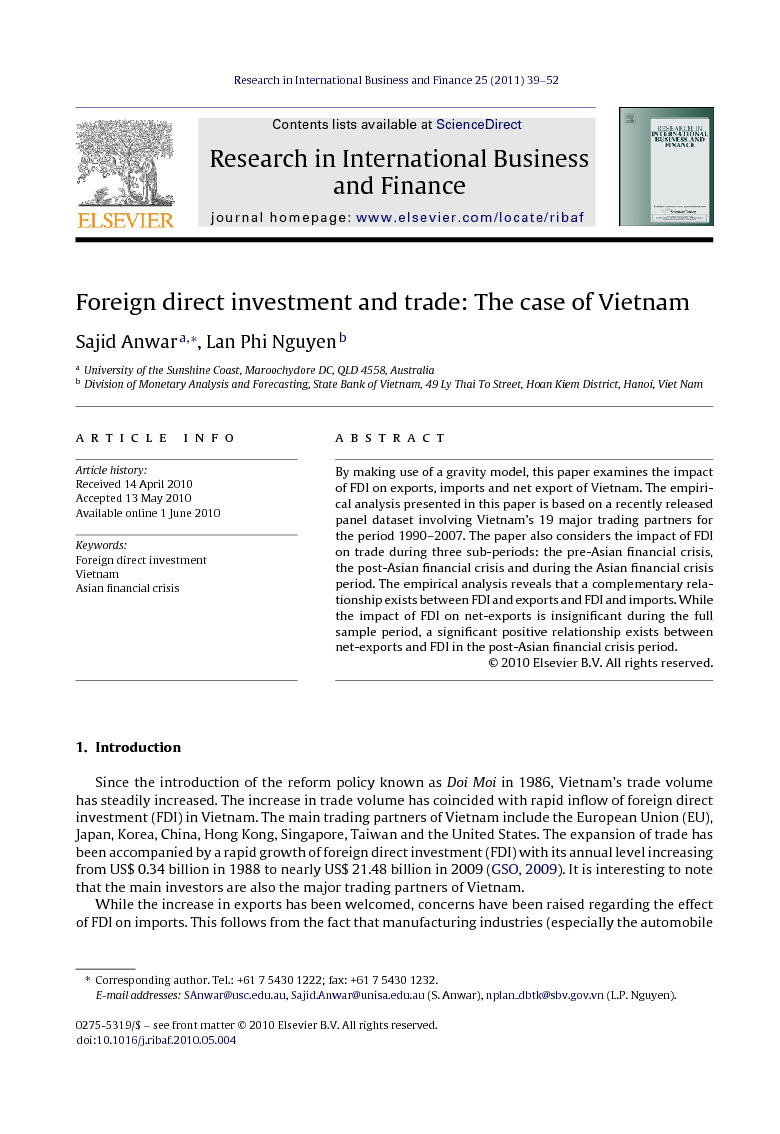 Since the introduction of the reform policy known as Doi Moi in 1986, Vietnam's trade volume has steadily increased. The increase in trade volume has coincided with rapid inflow of foreign direct investment (FDI) in Vietnam. The main trading partners of Vietnam include the European Union (EU), Japan, Korea, China, Hong Kong, Singapore, Taiwan and the United States. The expansion of trade has been accompanied by a rapid growth of foreign direct investment (FDI) with its annual level increasing from US$ 0.34 billion in 1988 to nearly US$ 21.48 billion in 2009 (GSO, 2009). It is interesting to note that the main investors are also the major trading partners of Vietnam. While the increase in exports has been welcomed, concerns have been raised regarding the effect of FDI on imports. This follows from the fact that manufacturing industries (especially the automobile and electronics industries) that are attracting significant FDI rely heavily on imported inputs. It is therefore likely that the direct effect of FDI on net-exports in Vietnam is not significant or may even be negative. However, the existing studies appear to support the view that the indirect effect of FDI on manufacturing sector in the form of technological spillovers and increased efficiency is significant. A number of theoretical and empirical studies have considered the impact of FDI on trade flows. Early theoretical studies have argued that, in the presence of trade barriers, FDI and trade can be substitutes. In other words, the effect of FDI on trade can be negative. However, empirical studies such as Lipsey and Weiss, 1981 and Lipsey and Weiss, 1984, Blomström et al. (1988), Yamawaki (1991) and Fukasaku et al. (2000) have found FDI and trade to be complements. Recent theoretical studies have argued that whether FDI promotes or substitutes for trade depends on the type of FDI (Markusen, 1997 and Markusen, 2002). Markusen and Maskus (2002) have argued that vertical FDI where MNCs geographically split stages of production is likely to stimulate trade. On the other hand, horizontal FDI where MNCs produce identical goods at multiple locations is likely to substitute for trade. The recent empirical work of Beugelsdijk et al. (2008) suggests that FDI and trade are substitutes. This paper attempts to extend the existing literature by examining the link between FDI and trade in Vietnam; specifically, the link between (i) FDI and exports, (ii) FDI and imports and (iii) FDI and net-exports. Vietnam offers a particularly interesting case study for several reasons. Firstly, among the developing economies, Vietnam has experienced a high level of economic growth and also attracted significant FDI since the late 1980s. Prior to introduction of the reform process that started in the late 1980s, the Vietnamese economy was operating under a centrally planned system and studies on Vietnam are scare due to the unavailability of data. Secondly, in order to increase the inflow of FDI as well as to promote technology transfer from foreign to domestic firms, the Vietnamese government promulgated the Law of Foreign Investment in 1987. An important aim of this law along with other steps taken by the government is to encourage innovation and boost productivity of domestic firms thereby increasing the net-exports. Accordingly, a case study of Vietnam is likely to enhance our understanding of the effectiveness of government policies. In addition, an understanding of the link between trade and FDI in Vietnam is likely to help the Vietnamese policy makers to attempt to harmonize the national FDI and trade policies which is likely to promote sustainable economic growth. Because of the lack of data, FDI-trade nexus in Vietnam has not received adequate attention in the existing literature. This paper which is essentially a replication of the existing literature makes use of a recently released dataset. The rest of this paper is organised as follows. Section 2 contains a review of the FDI literature. Section 3 deals with FDI and trade in Vietnam. Section 3 focuses on methodology. Empirical results are presented in Section 4 and Section 5 contains concluding remarks.

Market oriented economic reforms along with trade liberalisation and massive inflow of FDI during the last decade have contributed to significant growth in Vietnam's trade volume. Due to lack of data, few existing studies have empirically examined the impact of FDI on Vietnam's trade volume. By making use of a well-established gravity model, this paper attempts to examine the link between (i) FDI and exports, (ii) FDI and imports and (iii) FDI and net-exports in Vietnam. The empirical analysis based on panel data involving Vietnam's 19 major trading partners for the period 1990–2007 reveals that a significant relationship exists between exports and FDI and imports and FDI in Vietnam. The paper also considers the impact of FDI on exports, imports and net-exports during three sub-periods: the pre-Asian financial crisis period, the post-Asian financial crisis period and during the Asian financial crisis period. The empirical analysis shows that FDI in Vietnam has led to a significant increase in both exports and imports. Both exports and imports are complementary to FDI. The impact of FDI on net-exports for the entire sample period is insignificant but its effect during the post-Asian crisis period is positive and significant. This paper also found that geographical distance has a negative effect on trade volume and the impact of increase in per capita income on trade flows is large and significant. The implications of our results are as follows. First and foremost, Vietnam needs to continue to improve its legal environment relating to FDI. Further improvements in the legal environment are likely to make Vietnam a more attractive foreign investment destination. Specifically, Vietnam needs to create a long-term and consistent policy environment for foreign investors. By necessity such environment must be free from frequent and piecemeal changes. A single legal framework that governs all forms of investments and eliminates discriminatory treatment would be highly attractive to prospective foreign investors. Secondly, increased competition from China and other Asian countries requires Vietnam to consider undertaking more rapid and systematic economic reforms including the financial sector reforms. Infrastructure upgrading is a must if Vietnam wants to continue to attract substantial FDI into the future. Thirdly, in order to take advantage of abundant and cheap labour force, Vietnam's needs to invest more resources into human capital development. Training and re-training of the labour force must remain on the agenda. Modern training facilities with well qualified instructors, including joint ventures with expatriates wherever needed can result in a large pool of skilled workers that are presently hard to find. At the same time, the unemployment rate among the unskilled workers based in rural regions is very high. Despite steps taken to liberalise the economy, the Vietnamese industries are dominated by state owned enterprises that account for more than 90% of domestic investment. Privatisation of some large state owned enterprises can help improve productivity and hence export performance of Vietnam.