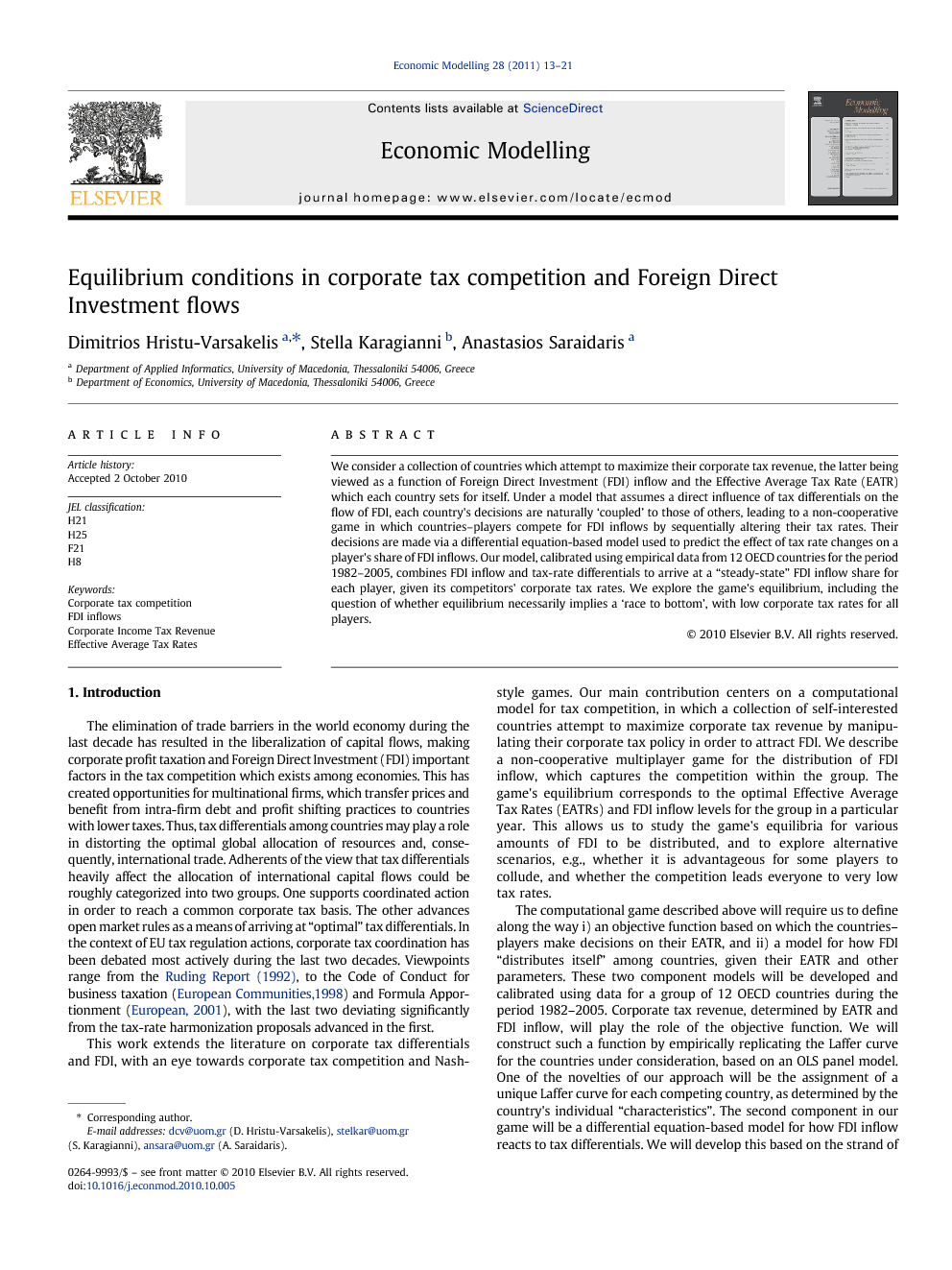 We consider a collection of countries which attempt to maximize their corporate tax revenue, the latter being viewed as a function of Foreign Direct Investment (FDI) inflow and the Effective Average Tax Rate (EATR) which each country sets for itself. Under a model that assumes a direct influence of tax differentials on the flow of FDI, each country's decisions are naturally ‘coupled’ to those of others, leading to a non-cooperative game in which countries–players compete for FDI inflows by sequentially altering their tax rates. Their decisions are made via a differential equation-based model used to predict the effect of tax rate changes on a player's share of FDI inflows. Our model, calibrated using empirical data from 12 OECD countries for the period 1982–2005, combines FDI inflow and tax-rate differentials to arrive at a “steady-state” FDI inflow share for each player, given its competitors' corporate tax rates. We explore the game's equilibrium, including the question of whether equilibrium necessarily implies a ‘race to bottom’, with low corporate tax rates for all players.

The elimination of trade barriers in the world economy during the last decade has resulted in the liberalization of capital flows, making corporate profit taxation and Foreign Direct Investment (FDI) important factors in the tax competition which exists among economies. This has created opportunities for multinational firms, which transfer prices and benefit from intra-firm debt and profit shifting practices to countries with lower taxes. Thus, tax differentials among countries may play a role in distorting the optimal global allocation of resources and, consequently, international trade. Adherents of the view that tax differentials heavily affect the allocation of international capital flows could be roughly categorized into two groups. One supports coordinated action in order to reach a common corporate tax basis. The other advances open market rules as a means of arriving at “optimal” tax differentials. In the context of EU tax regulation actions, corporate tax coordination has been debated most actively during the last two decades. Viewpoints range from the Ruding Report (1992), to the Code of Conduct for business taxation (European Communities,1998) and Formula Apportionment (European, 2001), with the last two deviating significantly from the tax-rate harmonization proposals advanced in the first. This work extends the literature on corporate tax differentials and FDI, with an eye towards corporate tax competition and Nash-style games. Our main contribution centers on a computational model for tax competition, in which a collection of self-interested countries attempt to maximize corporate tax revenue by manipulating their corporate tax policy in order to attract FDI. We describe a non-cooperative multiplayer game for the distribution of FDI inflow, which captures the competition within the group. The game's equilibrium corresponds to the optimal Effective Average Tax Rates (EATRs) and FDI inflow levels for the group in a particular year. This allows us to study the game's equilibria for various amounts of FDI to be distributed, and to explore alternative scenarios, e.g., whether it is advantageous for some players to collude, and whether the competition leads everyone to very low tax rates. The computational game described above will require us to define along the way i) an objective function based on which the countries–players make decisions on their EATR, and ii) a model for how FDI “distributes itself” among countries, given their EATR and other parameters. These two component models will be developed and calibrated using data for a group of 12 OECD countries during the period 1982–2005. Corporate tax revenue, determined by EATR and FDI inflow, will play the role of the objective function. We will construct such a function by empirically replicating the Laffer curve for the countries under consideration, based on an OLS panel model. One of the novelties of our approach will be the assignment of a unique Laffer curve for each competing country, as determined by the country's individual “characteristics”. The second component in our game will be a differential equation-based model for how FDI inflow reacts to tax differentials. We will develop this based on the strand of the literature which advocates the existence of nonlinear reaction functions of FDI inflows to tax-rate differentials, with EATR, EATR2 and GDP ratios used as control variables. Unlike the standard view in the literature where countries are competing in pairs for bilateral FDI inflows, competition in our setting takes place against the entire group simultaneously, and not “pairwise”. This scenario is viewed as more realistic, and may thus be more useful in terms of policy making. The remainder of the paper is organized as follows. The next section reviews the literature on corporate taxes, corporate tax competition and FDI. Section 3 discusses the two basic components needed to formulate our game. These include a model for the behaviour of competing countries, with empirical analysis and data for the specification of objective functions (i.e., corporate tax revenue), and also the response of FDI inflows to tax differentials. Section 4 formulates a computational corporate tax competition game, whose equilibria under alternative scenarios for FDI flow levels are then examined in Section 5. In particular, the game's equilibria suggest that, ultimately, tax competition does not lead to zero (or very low) corporate tax rates for all players, and that collusion (either among “large” or “small” players) does not seem to be preferable over free competition. Section 6 summarizes our results and discusses some policy implications.

We have proposed a game-based model for capturing tax competition among countries that seek to maximize corporate tax revenue by adjusting their corporate tax rates in an effort to attract FDI. Numerical experiments using data from twelve OECD countries during 1982–2005 suggest that there will be no “race to the bottom” for the group as a result of tax competition. In our experiments, race-to-bottom conditions did occur for very large (over 50 times the 2005 value) amounts of FDI inflow, ceteris paribus. Our results are in line with the recent literature discussing the existence of a tax rent bonus offered by large countries to mobile investment capital (e.g., in the case of USA, Japan, Germany, Italy, Sweden, UK, France, and Canada). Also, there may be multiple equilibrium positions in which the optimum EATR for the competing countries heavily depends on the prior choices of other countries. With respect to the existence (or not) of a race to bottom, our findings seem to be in agreement with studies such as Haufler and Wooton, 1999 and Baldwin and Krugman, 2004, and others (see, for example the discussion in Loretz (2007)), as opposed to early work in tax competition which predicted (either explicitly or implicitly) a race to bottom for tax rates (e.g. Dhillon et al., 1999, Mintz, 1999 and Wilson, 1991). Our simulations also suggest that there is no room for collusion either among “large” or “small” players. Thus, even if we ignore additional considerations that would direct policy away from minimal EATR values, there would be no incentive, for example, for countries like Portugal, Spain, Netherlands, and Greece to conspire on keeping very low rates, because their difficulties in attracting FDI are in some significant part due to factors other than tax rates, as we have discussed in Section 3.1. In the case of the EU-25, which follow a strict convergence program, with the intention of eventually leading to a unified level of development and similar political and economic characteristics, the scenario of convergence to zero (or very low) EATR equilibrium levels in an extended time span appears weak. If, in some idealized setting, these uniform conditions were achieved, they would likely drive long-run equilibrium to homogenous EATR levels. However, those levels would not necessarily be low. One reason for this, aside from policy considerations which argue against extreme EATR levels, would be that countries outside the EU-25 are likely to differ from member states in terms of their economic variables. Another reason is that it is unlikely that the objective functions of countries both inside and outside the EU-25 would be similar enough so that the game equilibrium occurs at very low EATRs for all players. Opportunities for future research include augmenting the FDI distribution model to incorporate dynamic effects in the specification of the intensity matrix which determines the proportion of FDI allocated to each country, and also to account for economic geography gravity variables, such as market investment potential, openness, infrastructure, language, and bilateral tax agreements. In this context, it is also of interest to consider the role of rising economies which may be more likely to fuel a race to bottom with respect to corporate taxation. Our game model is sufficiently flexible so that substituting more advanced CTR objective functions and/or FDI reaction functions would be relatively straightforward. Our findings do not preclude the need for some sort of common EU or OECD tax administration actions intended to facilitate investment capital and profit allocation, in a way that reduces administration costs and economic inefficiencies, but without limiting the governments' taxing power according to the national objectives and constraints. Moreover, given the existence of multiple equilibria found in this work, and in light of recent studies which predict that corporate tax competition will lead to tax rates converging to lower than welfare-optimal levels (e.g., Devereux et al., 2008, Clausing, 2007 and Bénassy-Quéré et al., 2005), it would be interesting to determine whether any of these correspond to “harmful” corporate tax competition, in terms of welfare losses. Finally, it might be worth to investigate the likely consequences of tax avoidance through income-shifting from the personal to the corporate tax base.