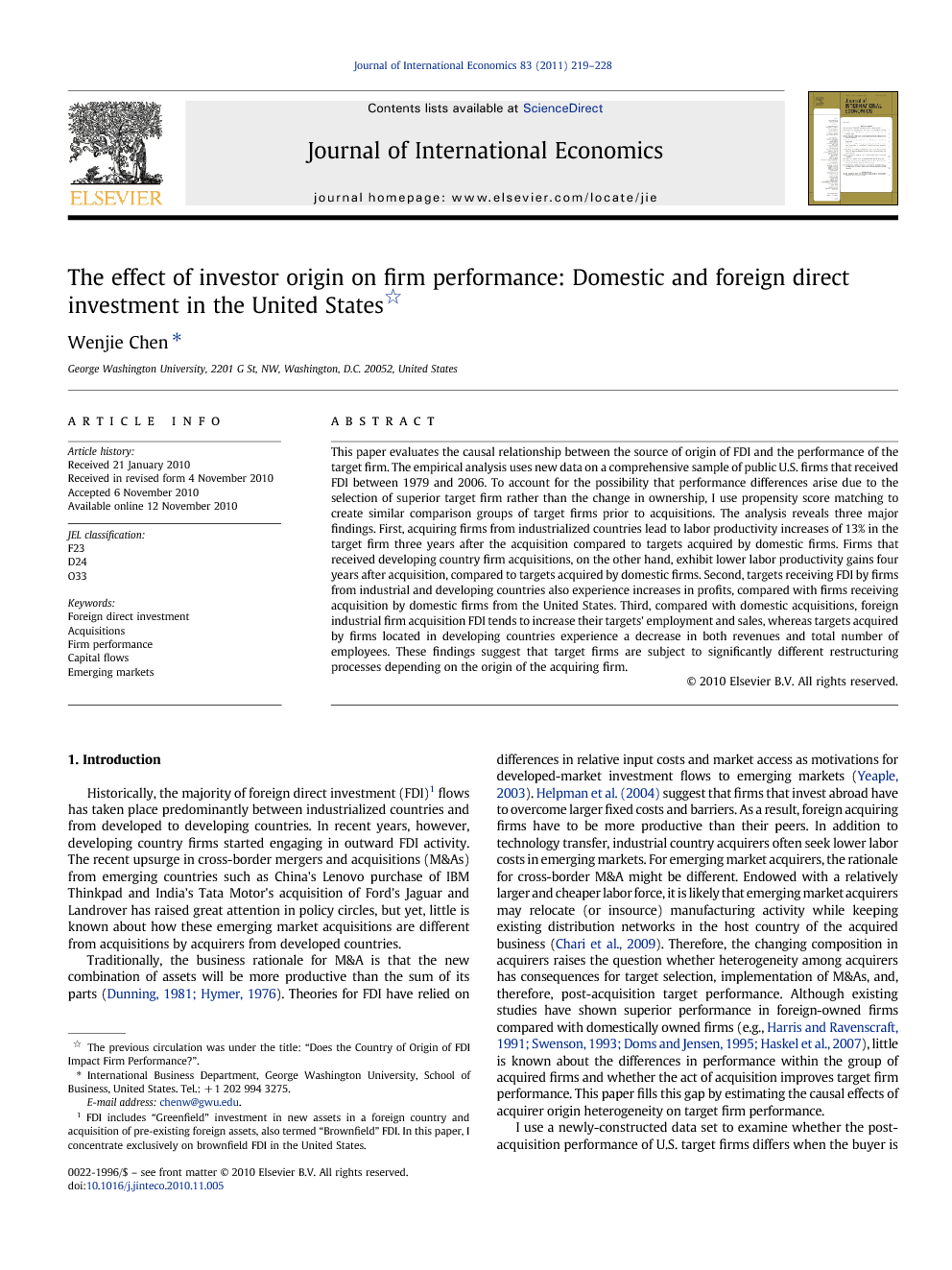 This paper evaluates the causal relationship between the source of origin of FDI and the performance of the target firm. The empirical analysis uses new data on a comprehensive sample of public U.S. firms that received FDI between 1979 and 2006. To account for the possibility that performance differences arise due to the selection of superior target firm rather than the change in ownership, I use propensity score matching to create similar comparison groups of target firms prior to acquisitions. The analysis reveals three major findings. First, acquiring firms from industrialized countries lead to labor productivity increases of 13% in the target firm three years after the acquisition compared to targets acquired by domestic firms. Firms that received developing country firm acquisitions, on the other hand, exhibit lower labor productivity gains four years after acquisition, compared to targets acquired by domestic firms. Second, targets receiving FDI by firms from industrial and developing countries also experience increases in profits, compared with firms receiving acquisition by domestic firms from the United States. Third, compared with domestic acquisitions, foreign industrial firm acquisition FDI tends to increase their targets' employment and sales, whereas targets acquired by firms located in developing countries experience a decrease in both revenues and total number of employees. These findings suggest that target firms are subject to significantly different restructuring processes depending on the origin of the acquiring firm.

This paper measures the performance of U.S. target firms after acquisition by firms from a broad range of countries over a five-year period using daily announced M&A information and firm level financial statement data between 1979 and 2006. In contrast to previous studies that lump all acquisitions by foreign firms together, I differentiate those acquisitions made by industrial country firms from those made by firms from developing countries. In order to control for non-random selection, I use multiple treatment propensity scores to match similar firms between comparison groups. Consistent with the predictions of the Helpman et al. (2004) model, targets acquired by firms from industrial countries exhibit the best post-acquisition performance. Targets acquired by non-U.S. firms from industrialized countries experience an increase in labor productivity of up to 13% and an increase in profitability that is greater by 10 percentage points compared with targets acquired by domestic firms. This improvement in performance is driven by increases in sales. Acquirers from developing countries lead to 23% lower labor productivity gains in their targets compared to targets acquired by domestic firms, but they improve the post-acquisition profit of their targets by 8 percentage points more than U.S. domestic acquirers do. In contrast to acquisitions by non-U.S. industrial country firms, acquisitions by developing country firms tend to result in lower labor productivity gains and decreases in employment and sales in U.S. targets. These results are robust to different propensity score specifications as well as to sample classifications. The study provides some of the first evidence that acquirer origin matters for target post-acquisition performance. The findings also highlight how accounting for heterogeneity in acquirer types reveals different channels by which post-acquisition performance is improved. The use of multiple treatment propensity score matching and detailed firm level data in this paper provides a methodology for controlling possible selection issues that could be employed in other studies of acquisition types where selection is non-random. In fact, I show that when not controlling for selection, the estimation yields different results that do not separate causality from correlation. Finally, even though an overall welfare assessment is not possible here due to the lack of data on the acquirers, the results suggest that U.S. public target firms benefit more from foreign acquisitions than from domestic M&As in terms of overall performance measured as profitability, with the largest improvements stemming from non-U.S. industrial country firms. If assessing performance using labor productivity, however, being acquired by a non-U.S. industrial country firm has positive effects on the target's productivity, whereas being acquired by a developing country firm results in lower productivity gains, when compared with domestic acquisition. At the same time, workers in U.S. public target firms that are acquired by developing country firms are more likely to lose their jobs, whereas there are employment gains in acquisitions made by non-U.S. industrial country firms, compared to U.S. domestic acquisitions. These findings provide new insights into the workings and consequences of domestic and cross-border M&As. In particular, for governments that are devising policies toward FDI, these results suggest that not all types of foreign investments should be treated in the same way. By building on this paper's approach to differentiating acquirer types, future studies can use more detailed data on the acquirer firms to help evaluate the overall impact of M&A deals. For instance, do acquirers perform differently after purchasing target firms? Do productivity, revenue and employment also change differently in the acquirers depending on the type of target? The methodology in this paper allows for the study of the effect on acquirers by differentiating the types of targets. Specifically, it enables us to identify how post-acquisition performance changes when targets are located in different parts of the world. Complementing the results in this paper, such future studies will increase our general understanding of the effect of M&As on both acquirers and targets in a variety of locations around the globe.