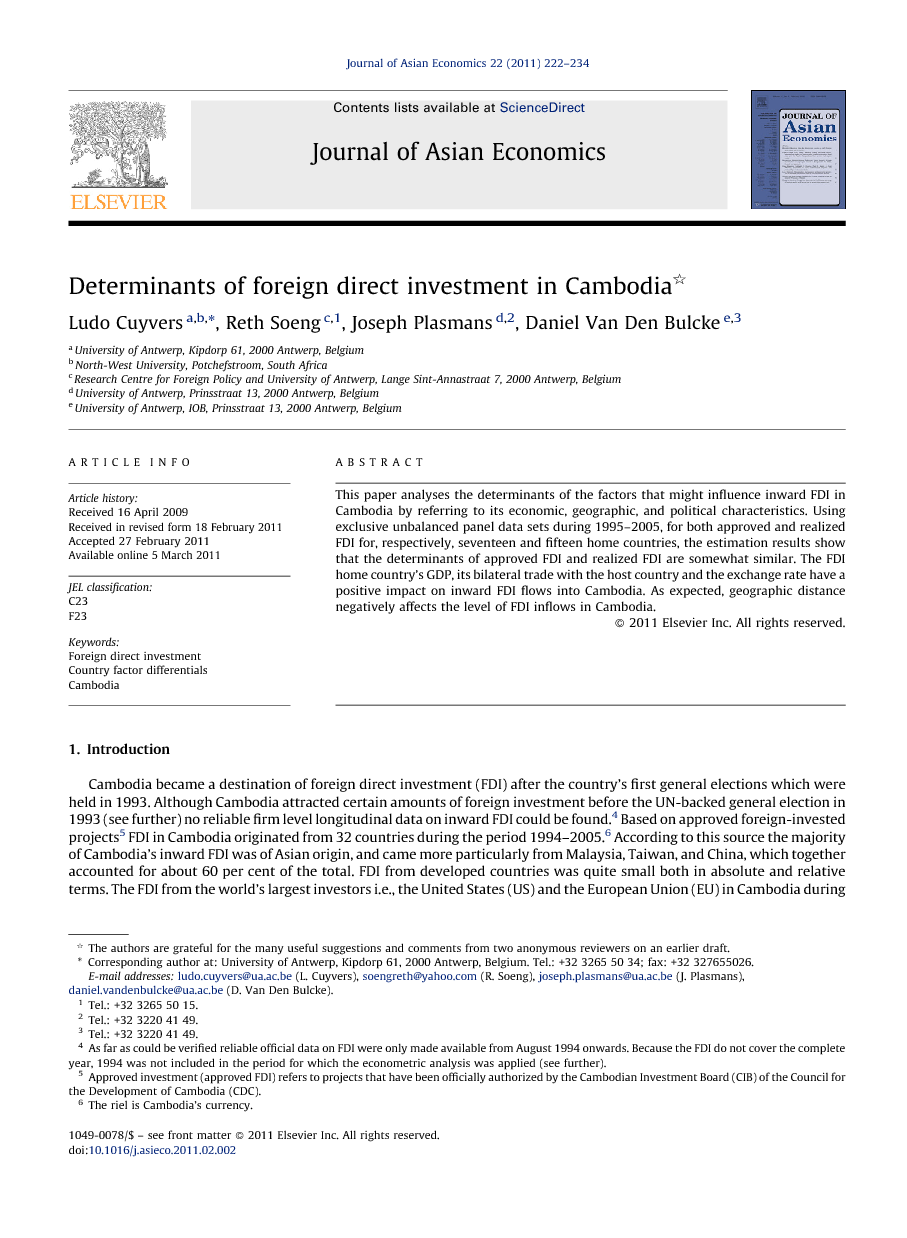 This paper analyses the determinants of the factors that might influence inward FDI in Cambodia by referring to its economic, geographic, and political characteristics. Using exclusive unbalanced panel data sets during 1995–2005, for both approved and realized FDI for, respectively, seventeen and fifteen home countries, the estimation results show that the determinants of approved FDI and realized FDI are somewhat similar. The FDI home country's GDP, its bilateral trade with the host country and the exchange rate have a positive impact on inward FDI flows into Cambodia. As expected, geographic distance negatively affects the level of FDI inflows in Cambodia.

Cambodia became a destination of foreign direct investment (FDI) after the country's first general elections which were held in 1993. Although Cambodia attracted certain amounts of foreign investment before the UN-backed general election in 1993 (see further) no reliable firm level longitudinal data on inward FDI could be found.4 Based on approved foreign-invested projects5 FDI in Cambodia originated from 32 countries during the period 1994–2005.6 According to this source the majority of Cambodia's inward FDI was of Asian origin, and came more particularly from Malaysia, Taiwan, and China, which together accounted for about 60 per cent of the total. FDI from developed countries was quite small both in absolute and relative terms. The FDI from the world's largest investors i.e., the United States (US) and the European Union (EU) in Cambodia during 1994–2004 only reached 8.4 per cent and 7 per cent of total FDI in Cambodia, respectively. FDI from Japan was even more limited, accounting for a negligible 0.4 per cent in Cambodia's total FDI (Cuyvers, Soeng, & Van Den Bulcke, 2009). The sectoral distribution of FDI in the Cambodian economy shows a very uneven pattern. FDI is concentrated in labour-intensive, export-oriented manufacturing industries, such as garments and is important in tourism-related sectors such as hotels and restaurants. Although the Cambodian Government encourages FDI in agriculture and the agro-industry, the cumulative FDI in these two sectors accounted only for about 5 per cent of the total FDI in the country. FDI in Cambodia is very unevenly spread across the country. The capital city of Phnom Penh and the surrounding Kandal province attracted by far the largest share with 82 per cent of total FDI. Sihanoukville came in second position and yet only represented 8 per cent between 1994 and 2004. Although the Government promoted Special Promotion Zones/Special Economic Zones in some parts of the country, most of these areas hosted virtually no FDI. Three main contributions are expected from the study of Cambodia's determinants of inward FDI by looking at the economic and geographic as well political characteristics of the country. First, the fact that the limited information about FDI activities in Cambodia is relatively recent and only goes back to the middle of the 1990s makes it an interesting case, especially because the factors that have influenced the inflows are not well understood. Second, Cambodia evolved from a strictly regulated and centralized economy to a more dynamic and open business environment in general and for foreign investors in particular. Improvements such as the simplification of the investment law, the introduction of a competitive corporate tax, a liberal investment policy and a wider openness to the rest of the world made the country and its large labour pool more attractive to foreign enterprises. It is useful to evaluate the success of these policy changes. Third, it will be tried to shed some light on the role that inward FDI played in the further economic development of Cambodia, particularly by taking into account the scope for FDI from its more advanced ASEAN partner countries. For these reasons this paper intends to contribute to the literature on the determinants of FDI in host developing and transitional economies in general and in Cambodia in particular. The speed of regional economic integration during and after the successful implementation process of the ASEAN Free Trade Agreement, in which Cambodia took part when it became a member of ASEAN on 30 April 1999, and the intended creation of the ASEAN Economic Community in 2015, is likely to strengthen and further increase the FDI flows in the region and into Cambodia coming from more developed partner countries such as Singapore, Malaysia and Thailand. This study should allow a better understanding of how intra-regional investment liberalization by less-developed ASEAN countries has an effect on inward FDI and can contribute to ASEAN regional integration. The remainder of this paper is organized as follows. Section 2 briefly describes the development of FDI in Cambodia. In Section 3 the relevant literature is reviewed and the hypotheses are outlined. Section 4 presents the econometric model, while the presentation of the data takes place in Section 5. The estimation methodology and estimation results are discussed in Sections 6 and 7. In Section 8 some conclusions are drawn.

This paper has examined the factors that might affect the inflows of FDI into Cambodia's small open economy over the period 1995–2005. Panel data sets were used for both approved and realized FDI. The data from 17 home countries for approved FDI and 15 countries of origin for realized FDI were pooled over 1995–2005. Even though some countries are not included, these panel data sets for the approved and realized FDI represent almost all (about 99 per cent) of Cambodia's total FDI inflows during this period. The major difference between the above findings and a number of previous empirical studies about other countries resides in the use of explanatory variables in relative terms and in the application of several diagnostic tests for choosing the best possible econometric estimation technique. Another important feature of this paper is that unit root tests were conducted for all time-variant variables to avoid spurious regression results. Random effects estimation proved to be most suitable for estimating approved FDI, while a pooled OLS model performed statistically better for the estimations of realized FDI. One-year lagged explanatory variables were used to estimate their impact on FDI inflows. The results show that the determinants of approved FDI and realized FDI are similar. The FDI home country's GDP, bilateral trade, and the exchange rate have a positive impact on inward FDI flows into Cambodia. Geographical distance negatively affects the level of FDI inflows in Cambodia. This explains that a large share of FDI inflows over the period under consideration largely came from developing Asian neighbouring countries. With respect to the policy implications for Cambodia, it is interesting to stress that international trade is shown to have a major impact on FDI inflows into the country. Therefore, a further liberalization of Cambodia's international trade should attract more inward FDI, which in turn is expected to generate some positive externalities in the economy. Improving the political risk score is shown to have created a favourable environment for attracting foreign investments. As the home country GDP is a main driving force of inward FDI flows into Cambodia, it follows that the country's ability to attract inward FDI is, to some extent, beyond its control and depends on the GDP growth of the world economy and specific home countries. Thus, the Cambodian Government should devote much more effort in creating “pull factors” for the country, e.g. by improving its institutions, infrastructure and legal systems, by the removal of administrative barriers, etc. which can result in dynamic positive effects of inward FDI and economic growth, in addition to stimulating technology transfer to the country. As to the role that regional economic integration played in the inflow of FDI in Cambodia, it is found that investment inflows driven by increased international trade with the other member countries has been significant. Yet, no additional impact was detected from Cambodia's ASEAN membership per se. Much impact on inward FDI in the country can be assigned to the costs associated with doing business abroad (information cost, monitoring cost, transportation costs of supplying raw materials and intermediate inputs to the host country, etc.) which was proxied by distance. In the future, the role of international trade and distance will increase further, as they will be much affected by the regional integration process. With the deepening of ASEAN integration and the creation of the ASEAN Economic Community, it can therefore be expected that more FDI will flow into Cambodia from the more developed ASEAN neighbours Singapore, Malaysia and Thailand. It remains to be seen, however, how investment from China, Japan and South Korea, as the three major partner countries involved in the so called ‘ASEAN+3 process’, and from the ASEAN countries into China, will develop.