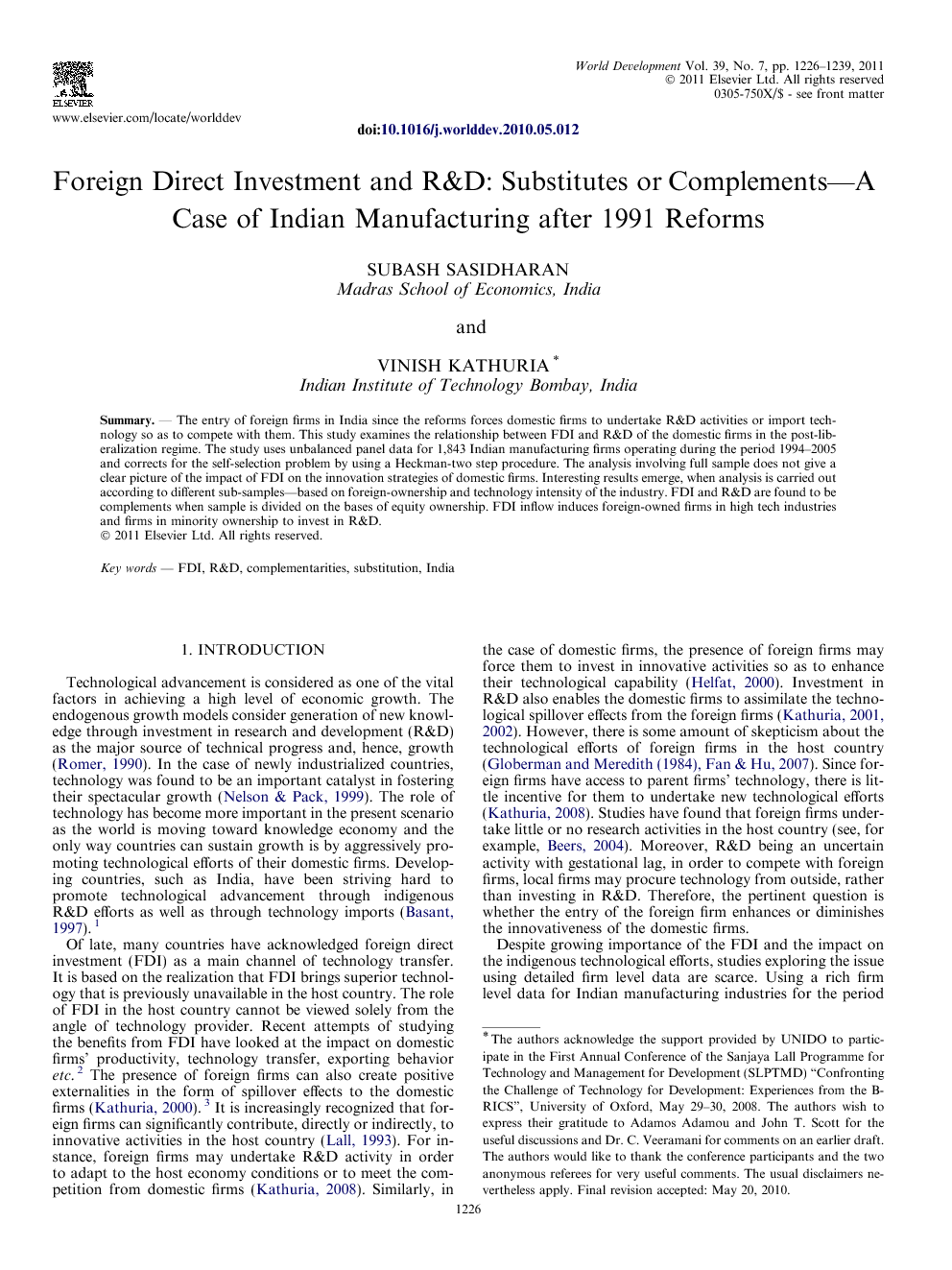 The entry of foreign firms in India since the reforms forces domestic firms to undertake R&D activities or import technology so as to compete with them. This study examines the relationship between FDI and R&D of the domestic firms in the post-liberalization regime. The study uses unbalanced panel data for 1,843 Indian manufacturing firms operating during the period 1994–2005 and corrects for the self-selection problem by using a Heckman-two step procedure. The analysis involving full sample does not give a clear picture of the impact of FDI on the innovation strategies of domestic firms. Interesting results emerge, when analysis is carried out according to different sub-samples—based on foreign-ownership and technology intensity of the industry. FDI and R&D are found to be complements when sample is divided on the bases of equity ownership. FDI inflow induces foreign-owned firms in high tech industries and firms in minority ownership to invest in R&D.

Technological advancement is considered as one of the vital factors in achieving a high level of economic growth. The endogenous growth models consider generation of new knowledge through investment in research and development (R&D) as the major source of technical progress and, hence, growth (Romer, 1990). In the case of newly industrialized countries, technology was found to be an important catalyst in fostering their spectacular growth (Nelson & Pack, 1999). The role of technology has become more important in the present scenario as the world is moving toward knowledge economy and the only way countries can sustain growth is by aggressively promoting technological efforts of their domestic firms. Developing countries, such as India, have been striving hard to promote technological advancement through indigenous R&D efforts as well as through technology imports (Basant, 1997).1 Of late, many countries have acknowledged foreign direct investment (FDI) as a main channel of technology transfer. It is based on the realization that FDI brings superior technology that is previously unavailable in the host country. The role of FDI in the host country cannot be viewed solely from the angle of technology provider. Recent attempts of studying the benefits from FDI have looked at the impact on domestic firms’ productivity, technology transfer, exporting behavior etc.2 The presence of foreign firms can also create positive externalities in the form of spillover effects to the domestic firms (Kathuria, 2000).3 It is increasingly recognized that foreign firms can significantly contribute, directly or indirectly, to innovative activities in the host country (Lall, 1993). For instance, foreign firms may undertake R&D activity in order to adapt to the host economy conditions or to meet the competition from domestic firms (Kathuria, 2008). Similarly, in the case of domestic firms, the presence of foreign firms may force them to invest in innovative activities so as to enhance their technological capability (Helfat, 2000). Investment in R&D also enables the domestic firms to assimilate the technological spillover effects from the foreign firms ( Kathuria, 2001 and Kathuria, 2002). However, there is some amount of skepticism about the technological efforts of foreign firms in the host country ( Globerman and Meredith, 1984 and Fan and Hu, 2007). Since foreign firms have access to parent firms’ technology, there is little incentive for them to undertake new technological efforts (Kathuria, 2008). Studies have found that foreign firms undertake little or no research activities in the host country (see, for example, Beers, 2004). Moreover, R&D being an uncertain activity with gestational lag, in order to compete with foreign firms, local firms may procure technology from outside, rather than investing in R&D. Therefore, the pertinent question is whether the entry of the foreign firm enhances or diminishes the innovativeness of the domestic firms. Despite growing importance of the FDI and the impact on the indigenous technological efforts, studies exploring the issue using detailed firm level data are scarce. Using a rich firm level data for Indian manufacturing industries for the period 1994–2005, this study investigates the effects of FDI on indigenous R&D efforts. An important contribution of this paper is the correction of self-selection bias arising from R&D activities. We have a reason to believe that results of most of the earlier studies using firm-level data are biased, as they have carried out analysis for only R&D performing firms. The R&D activities of the firms depend on the prevailing market structure. Therefore, firms can decide to do R&D depending on the market structure or, in other words, self-select in doing R&D. Analyzing only those firms that invest in R&D would imply that we are selecting a category of firms. In India or Japan or elsewhere, the way R&D data are reported can also result in self-selection bias. According to the Indian Company Act, firms need to report R&D expenses in their balance sheet provided the expenses are at least 1% of their sales turnover. For adaptive R&D or shop floor modifications, R&D expenditure of firms is often <1%; hence, these firms do not report it.4 This implies that the results of the previous studies (Kathuria and Das, 2005 and Kumar and Aggarwal, 2005) based on only those firms which report R&D are biased. Therefore, use of Ordinary Least Squares (OLS) will yield estimates that would be biased and inconsistent. In this study, we correct for the problem of self-selection bias by applying Heckman’s two-step procedure.5 Until 1991, India followed a restrictive policy on foreign capital (Rao, Murthy, & Ranganathan, 1999). The reforms undertaken during the early nineties have led to large inflows of FDI into the Indian economy.6 FDI is now allowed in almost all the sectors except those reserved for small scale industries or strategic reasons. As a result, competition in the domestic market has increased considerably. In order to thwart competition from foreign firms, domestic firms need either to invest in indigenous R&D or obtain new technology through imports. Since liberalization has also made import of technology cheaper and easier, firms can prefer technology imports instead of spending on R&D (Kathuria, 2008). The investment in R&D is, however, essential to compete with the global players as well as to adapt the imported technology. Against this backdrop, the purpose of this study is to explore the nature of the relationship between FDI and R&D in the post-liberalization era. Section 2 provides a brief literature review. Section 3 elaborates the hypothesis and model used to gauge the impact of FDI on R&D behavior. In Section 4, data sources and summary statistics of the key variables are given. Section 5 discusses the empirical results. Section 6 presents the conclusions.

One of the objectives of the economic reforms undertaken in India since 1991 is to open the doors to foreign firms for investment in the country. Apart from the direct effect of bringing capital and technology, FDI is also an important channel that influences R&D activities in an economy. The entry of foreign firms leads to an increase in competition in the domestic market. To compete with them, domestic firms have to undertake R&D activities or obtain technology from other sources. Against this backdrop, this study examined the relationship between FDI inflow and R&D behavior of Indian firms in the post-liberalization regime. Most previous studies addressing the issue are based on only those firms that report R&D, thereby creating the self-selection bias. This paper corrected for the self-selection problem by using a Heckman-two step procedure. Descriptive statistics show that the technological efforts in the form of R&D have declined marginally for both categories of firms during the study period. We also find that firms are increasingly depending on technology imports. The removal of restrictions on the imports during the reform period might has played a catalytic role in this phenomenon. The econometric analysis involving full sample firms failed to produce a clear picture of the impact of FDI on the innovation strategies of domestic firms. However, when analysis was carried out with sample bifurcating in two categories depending on ownership of foreign firms, FDI inflow and R&D decision of domestic firms was found to be complementary in nature. FDI, however, induces foreign firms in high technology intensive sectors and those having minority share to invest in R&D. Majority equity ownership and R&D decision of firms are found to be a substitute in nature giving credence to the conjecture that having access to parent’s technology acts as disincentive for foreign firms to invest in R&D. FDI inflow does not have any impact on the extent of R&D in most specifications. The literature on R&D spillovers examines the issue of whether knowledge created by firms’ R&D and patenting activities enhances the productivity of other firms via a spillover process. It is now well documented that the Indian policy goals of industrial development, growth, and equity in sixties and seventies resulted in a weak R&D appropriability regime. The situation was more or less same till India embarked on a newer patent regime in 2005. In such an environment, this would have led to significant spillovers from technological development activities if firms were willing to undertake R&D activities. But such a policy environment also limited the activities MNCs could undertake in the local market, thereby attenuating the spillovers. The results obtained can thus be looked in this broader perspective of whether opening of foreign investment policy in the restricted appropriability regime led to a commensurate increase in spillovers or not. Another important policy implication of the present study is can we have single policy toward FDI when response of firms to R&D decision is different depending upon the nature of industries? The investment in R&D being one of the surest ways of increasing the absorptive capacity having direct implication for competitiveness and spillover absorption potential of the firms. Since FDI is not affecting R&D behavior of all the domestic firms, more directed incentives are needed for the firms to invest in R&D to increase their competitiveness and enable them to absorb the technology spillovers from FDI. In this connection, sector-specific policies tailored to technological intensity of the industry have to be designed in order to encourage setting up of in-house R&D units. The study though has come up with important policy implications, opens up a number of avenues for future research. A limitation of the present study is the use of only stock exchange-listed firms. There are few large Indian firms that are not listed but may have responded to foreign firm by investing in R&D. Since ownership is a key determinant of investment decision (Gonzalez Perez, 2005), from property rights theory, 100% foreign subsidiaries especially in industries that rely on technological innovations may be more inclined to do R&D in the new patent and liberalized regime. The present analysis need to be extended to include those firms to give a complete picture of manufacturing industries. In the recent period, India has witnessed many MNCs locating R&D centers in India. As a future work, it will be interesting to examine the impact of these R&D centers on the behavior of other domestic firms. Another direction of future research is inclusion of small and privately-owned firms. Evidence exists that some of the small and private-owned firms are equally dynamic with respect to R&D. The conjecture is supported by the fact that, of the eight recipients of the 2003 national award for outstanding in-house R&D achievements in different fields, seven were small and medium in size and not listed on stock exchange. Thus, the study can be extended to look into their R&D behavior in the post-1991 scenario.