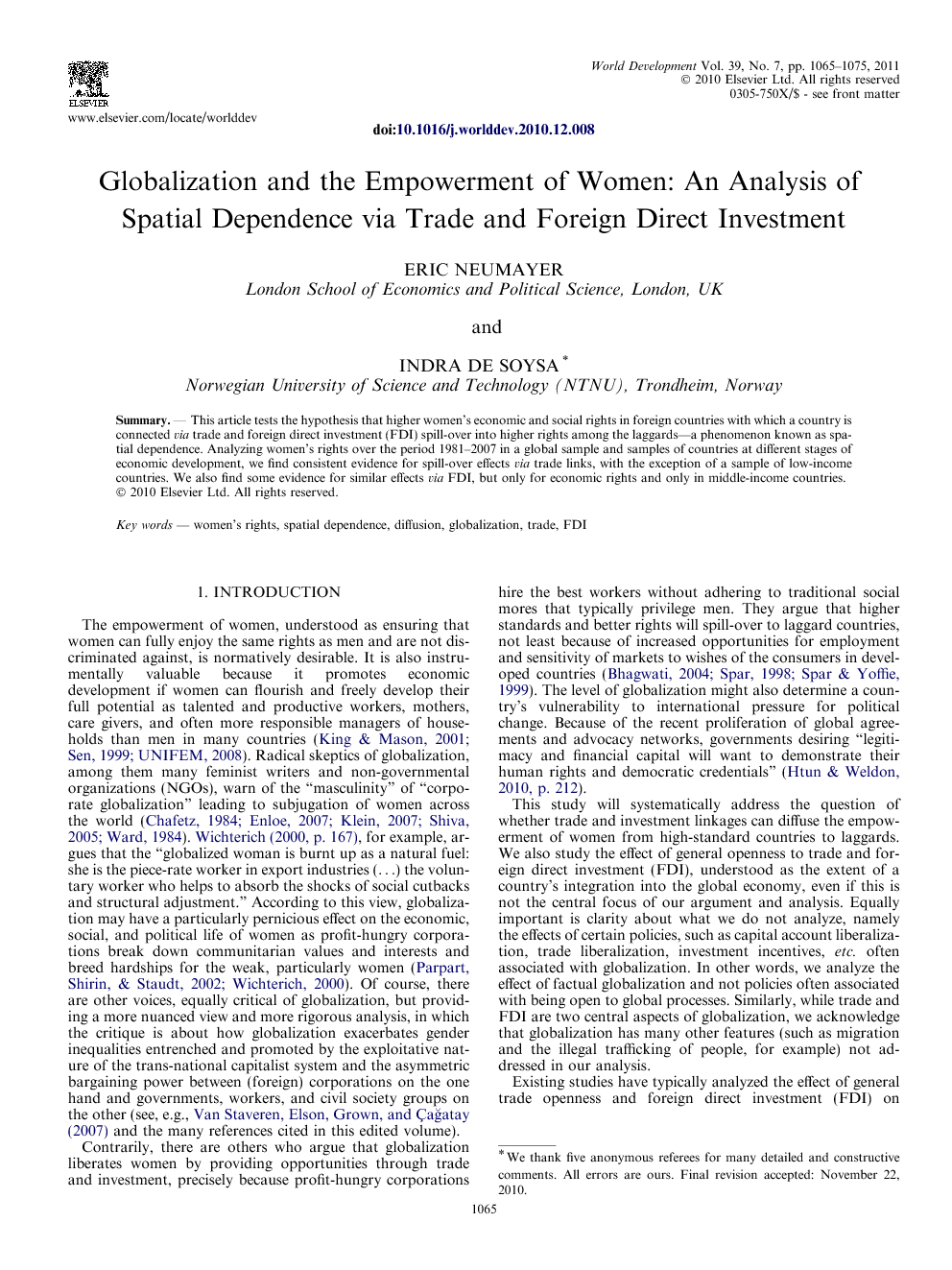 This article tests the hypothesis that higher women’s economic and social rights in foreign countries with which a country is connected via trade and foreign direct investment (FDI) spill-over into higher rights among the laggards—a phenomenon known as spatial dependence. Analyzing women’s rights over the period 1981–2007 in a global sample and samples of countries at different stages of economic development, we find consistent evidence for spill-over effects via trade links, with the exception of a sample of low-income countries. We also find some evidence for similar effects via FDI, but only for economic rights and only in middle-income countries.

The empowerment of women, understood as ensuring that women can fully enjoy the same rights as men and are not discriminated against, is normatively desirable. It is also instrumentally valuable because it promotes economic development if women can flourish and freely develop their full potential as talented and productive workers, mothers, care givers, and often more responsible managers of households than men in many countries (King and Mason, 2001, Sen, 1999 and UNIFEM, 2008). Radical skeptics of globalization, among them many feminist writers and non-governmental organizations (NGOs), warn of the “masculinity” of “corporate globalization” leading to subjugation of women across the world (Chafetz, 1984, Enloe, 2007, Klein, 2007, Shiva, 2005 and Ward, 1984). Wichterich (2000, p. 167), for example, argues that the “globalized woman is burnt up as a natural fuel: she is the piece-rate worker in export industries (…) the voluntary worker who helps to absorb the shocks of social cutbacks and structural adjustment.” According to this view, globalization may have a particularly pernicious effect on the economic, social, and political life of women as profit-hungry corporations break down communitarian values and interests and breed hardships for the weak, particularly women (Parpart et al., 2002 and Wichterich, 2000). Of course, there are other voices, equally critical of globalization, but providing a more nuanced view and more rigorous analysis, in which the critique is about how globalization exacerbates gender inequalities entrenched and promoted by the exploitative nature of the trans-national capitalist system and the asymmetric bargaining power between (foreign) corporations on the one hand and governments, workers, and civil society groups on the other (see, e.g., Van Staveren, Elson, Grown, and Çağatay (2007) and the many references cited in this edited volume). Contrarily, there are others who argue that globalization liberates women by providing opportunities through trade and investment, precisely because profit-hungry corporations hire the best workers without adhering to traditional social mores that typically privilege men. They argue that higher standards and better rights will spill-over to laggard countries, not least because of increased opportunities for employment and sensitivity of markets to wishes of the consumers in developed countries (Bhagwati, 2004, Spar, 1998 and Spar and Yoffie, 1999). The level of globalization might also determine a country’s vulnerability to international pressure for political change. Because of the recent proliferation of global agreements and advocacy networks, governments desiring “legitimacy and financial capital will want to demonstrate their human rights and democratic credentials” (Htun & Weldon, 2010, p. 212). This study will systematically address the question of whether trade and investment linkages can diffuse the empowerment of women from high-standard countries to laggards. We also study the effect of general openness to trade and foreign direct investment (FDI), understood as the extent of a country’s integration into the global economy, even if this is not the central focus of our argument and analysis. Equally important is clarity about what we do not analyze, namely the effects of certain policies, such as capital account liberalization, trade liberalization, investment incentives, etc. often associated with globalization. In other words, we analyze the effect of factual globalization and not policies often associated with being open to global processes. Similarly, while trade and FDI are two central aspects of globalization, we acknowledge that globalization has many other features (such as migration and the illegal trafficking of people, for example) not addressed in our analysis. Existing studies have typically analyzed the effect of general trade openness and foreign direct investment (FDI) on women’s empowerment, but they do not distinguish with whom a country transacts. Moreover, while some studies address a broad array of measures of women’s rights, women’s status, and material outcomes (see, e.g., Benería, 2003, Elson, 1999, Seguino, 2006 and Van Staveren et al., 2007), many studies only cover the employment ratio of women and the gender wage gap (Artecona and Cunningham, 2002, Berik et al., 2004, Black and Brainerd, 2004, Braunstein and Brenner, 2007, Denis, 2003, Fontana et al., 1998, Oostendorp, 2009, Tzannatos, 1999 and Villarreal and Yu, 2007). As some argue, increased employment and higher wages do not amount to empowerment if exploitation and abuse accompany these positives (Çağatay and Ertürk, 2004, Elson, 1999, Fontana and Wood, 2000, Morrisson and Jütting, 2005 and Standing, 1999) and while globalization may increase female employment and earnings in some countries, it may well reduce them in others (Kucera & Milberg, 2000). Our research, therefore, departs from previous studies in two important ways. First, we employ broader measures of women’s rights that include both economic and social rights, such as marriage and divorce rights, the right of movement, the right to property, the right to participate in social activities, the right to education, the right to inherit, etc. Together, women’s economic and social rights are a better gauge of female empowerment than simple measures of the wage-gap and employment ratios (Moghadam, 2007). We use data from Cingranelli and Richards (2009) covering the period 1981–2007 that largely measure the fulfillment of these rights in practice rather than their mere existence in legal documents alone. Secondly, we examine whether it matters with whom one trades and receives FDI from, whereas existing studies have examined general openness to trade and FDI. For example, if a country mainly trades with and receives FDI from countries that violate rights, we would not expect domestic rights to flourish, an argument often made about African trade with China (Taylor, 2006). Given the many arguments around the issue of globalization that focus on spill-over via trans-national linkages, such effects should be explicitly modeled to test these arguments (see, similarly, Greenhill, Mosley, and Prakash (2009) on trade-based diffusion of general labor rights).

Women’s empowerment plays a central role in the development debate. How does globalization affect women’s rights? In contrast to others, this article has analyzed this question in two distinct ways. First, we focused on spatial dependence, addressing whether higher women’s rights abroad spill-over into higher domestic rights via trans-national trade and FDI linkages. Secondly, we employed broad measures of women’s rights that included both economic and social rights. The question of whether higher women’s economic and social rights among a country’s major trade partners and investment sources spill-over into higher domestic levels of such rights is a crucial aspect of the globalization debate. We found consistent evidence for spill-over effects working via trade links for both sets of rights in all samples but the one restricted to low-income countries only. With one exception, this result was independent of the model specification. We found only weak and limited evidence of spill-over effects via FDI links for women’s economic or social rights. Only in middle-income countries do we find consistent evidence for such an effect on women’s economic rights, independently of the model specification. Going beyond spatial dependence, we found evidence suggesting that general trade openness is conducive to higher women’s economic rights whereas general FDI openness does not matter, two results which corroborate with updated data and a different estimation strategy results previously reported in Neumayer and de Soysa (2007). General trade openness also seems to promote women’s social rights, while general FDI openness appears conducive to such rights, but not in developing countries. In conclusion, general trade openness as well as spill-over effects working via trade links appear to be aspects of globalization that have a beneficial impact on women’s rights.11 Whether better women’s rights in absolute terms translate into higher gender equality in rights is difficult to say given we have no measure of men’s economic and social rights. We would, however, point out that, firstly, women’s rights are coded in a way as to partly refer to gender equality (e.g., “equal pay for equal work,” “equality in hiring and promotion practices,” “the right to equal inheritance”) and, secondly, because men will invariably enjoy many of the relevant rights already, any absolute improvements for women will typically translate into higher gender equality as well. More questionable is whether improved rights will lead to improved material outcomes for women, which should be a prime objective of future research. The two measures of women’s rights are only modestly correlated (below 0.4) with the ratio of female to male earnings and the gender-related human development index (HDI) as a percentage of the overall HDI (data taken from UNDP 2009). Moreover, globalization takes many forms beyond the ones looked at here and it will have many different effects and will affect some people positively while others negatively. However, when it comes to fundamental economic and social rights for women, on average the specific forms of globalization looked at here are beneficial rather than harmful to the empowerment of women.