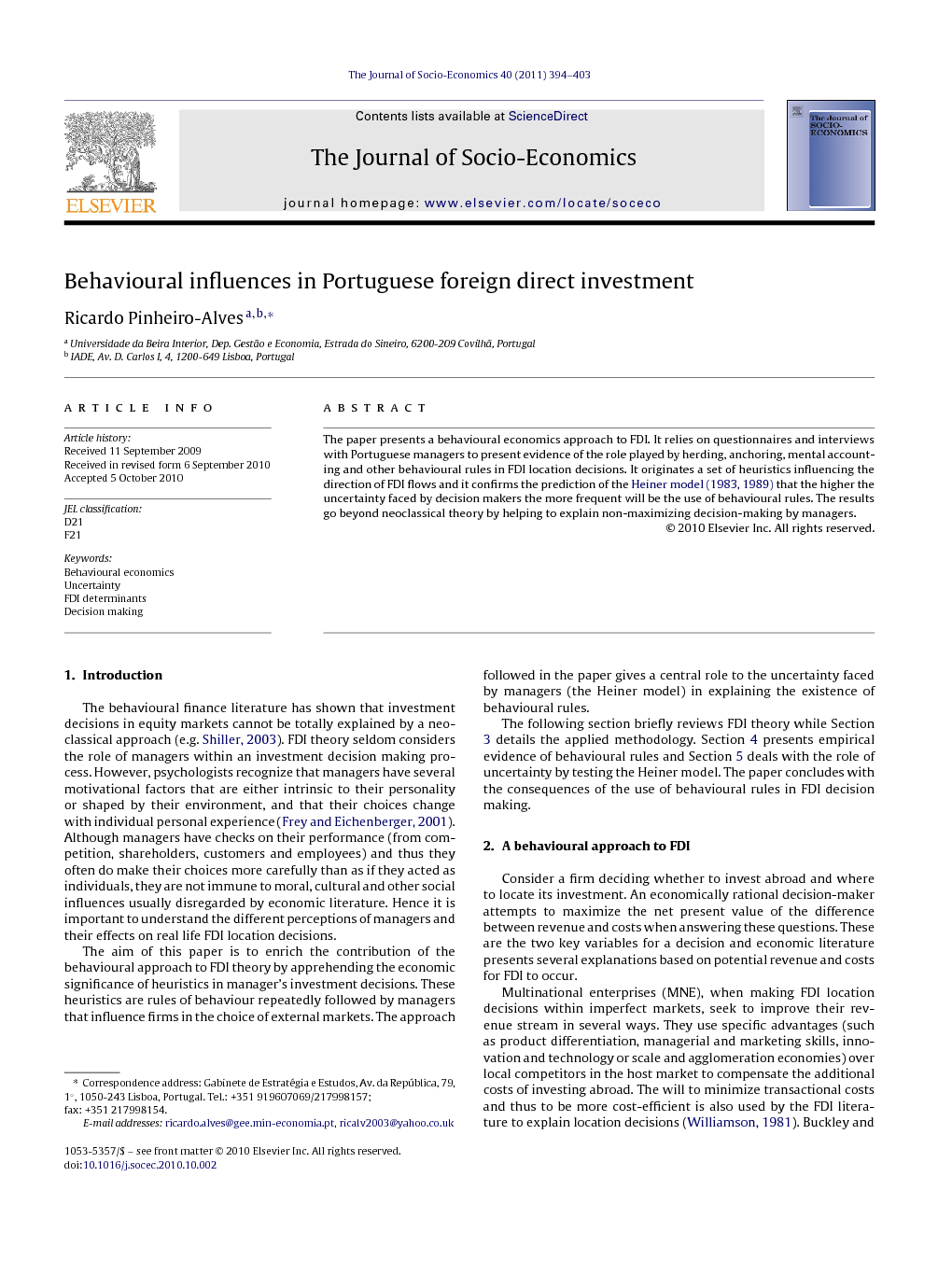 The paper presents a behavioural economics approach to FDI. It relies on questionnaires and interviews with Portuguese managers to present evidence of the role played by herding, anchoring, mental accounting and other behavioural rules in FDI location decisions. It originates a set of heuristics influencing the direction of FDI flows and it confirms the prediction of the Heiner, 1983 and Heiner, 1989 that the higher the uncertainty faced by decision makers the more frequent will be the use of behavioural rules. The results go beyond neoclassical theory by helping to explain non-maximizing decision-making by managers.

The behavioural finance literature has shown that investment decisions in equity markets cannot be totally explained by a neoclassical approach (e.g. Shiller, 2003). FDI theory seldom considers the role of managers within an investment decision making process. However, psychologists recognize that managers have several motivational factors that are either intrinsic to their personality or shaped by their environment, and that their choices change with individual personal experience (Frey and Eichenberger, 2001). Although managers have checks on their performance (from competition, shareholders, customers and employees) and thus they often do make their choices more carefully than as if they acted as individuals, they are not immune to moral, cultural and other social influences usually disregarded by economic literature. Hence it is important to understand the different perceptions of managers and their effects on real life FDI location decisions. The aim of this paper is to enrich the contribution of the behavioural approach to FDI theory by apprehending the economic significance of heuristics in manager's investment decisions. These heuristics are rules of behaviour repeatedly followed by managers that influence firms in the choice of external markets. The approach followed in the paper gives a central role to the uncertainty faced by managers (the Heiner model) in explaining the existence of behavioural rules. The following section briefly reviews FDI theory while Section 3 details the applied methodology. Section 4 presents empirical evidence of behavioural rules and Section 5 deals with the role of uncertainty by testing the Heiner model. The paper concludes with the consequences of the use of behavioural rules in FDI decision making.

Behavioural rules do influence managers in information collection, the selection of alternatives and the final FDI location decision. The FDI determinants arising from the behavioural approach were helpful in influencing 55% of the locations chosen by Portuguese managers. There were several situations where managers repeated the same behaviour in a consecutive way and kept unchanged non-maximizing decisions for a long period. Among the identified types of regularities those originated in the past and of extrinsic nature seem to have a more significant role in influencing FDI location decisions by Portuguese firms. But those of intrinsic nature and originated in the present are also significant. The influence of behavioural rules in FDI decisions has two main economic consequences. First, by considering the environmental context of decision making and the perceptions and motivations of firms’ decision makers, it is possible to reach a better understanding of how FDI decisions deviate from the predicted neoclassical rationality. The evidence above presents examples of sub-optimal decisions, such as the operation of non-profitable investments for a long period, where firms do not equate marginal rates of return in their different investment locations. This is not the “satisficing” of the traditional behavioural theory of the firm, where constraints from the limited capabilities of the human being explain why MNE are not able to indefinitely improve their behaviour towards maximization. It is the following of behavioural rules such as fairness, herding or anchoring, that while apparently reducing uncertainty, lead to the overestimation of expected outcomes in FDI decisions and prevent the choice of alternative locations with a higher return. Second, the use of behavioural rules has often changed the predicted direction of FDI flows. Evidence shows that the perceptions of managers influence the direction of FDI flows to places where other managers are investing, to locations with great availability in the news or to countries where managers, firms or the society as a whole, had previous experiences. These “unpredicted” directions are not necessarily where the firm could expect to obtain the highest rate of return from their investments, as per the neoclassical model, but they are chosen nonetheless. These results are based on Portuguese data and one can ask whether they are valid for other countries. The number of rules of behaviour for each of the characteristics (the time span where they originate or their intrinsic or extrinsic nature) is surely specific to the Portuguese case. But there are no obvious reasons why heuristics found in financial markets and in some FDI operations cannot be applied to FDI managers in different locations. Even the case of government intervention in FDI location decisions, where the direction of investment flows is oriented, is common to all countries. East Timor, for example, has received investment from Portugal, Australia and other countries. The most important is that the behavioural approach brings in new variables to FDI location decisions that are not solely based on the will to increase revenue or reduce costs and are extensible to investors of different nationalities when applying simplifying strategies as a way to deal with uncertainty. Finally, the findings and consequences presented above rely on some features that may be improved in future work. First, behavioural rules are complimentary in the explanation of FDI both to the neoclassical approach, by relaxing the assumption that investors are rational decision makers that behave as if maximizing by choosing the best alternative from a set of options based on probabilistic risk adjusted expected returns, and to the traditional behavioural theory of the firm. Given the examples of behavioural “rigidity”, future research should improve the knowledge about the way FDI decisions are made. Moreover, although heuristics indicate that agents are not able to learn from past experiences in all situations and thus cannot improve indefinitely their behaviour towards optimality, the knowledge about behaviour rules might help managers improving their performance by considering and reviewing their use. Second, the behavioural approach may be deepened through a better understanding of the role of contextual issues such as the influence of each firm's culture and history and the individual cognitive characteristics of managers, including cultural and moral variables. This suggests the existence of further behavioural influences in FDI operations.