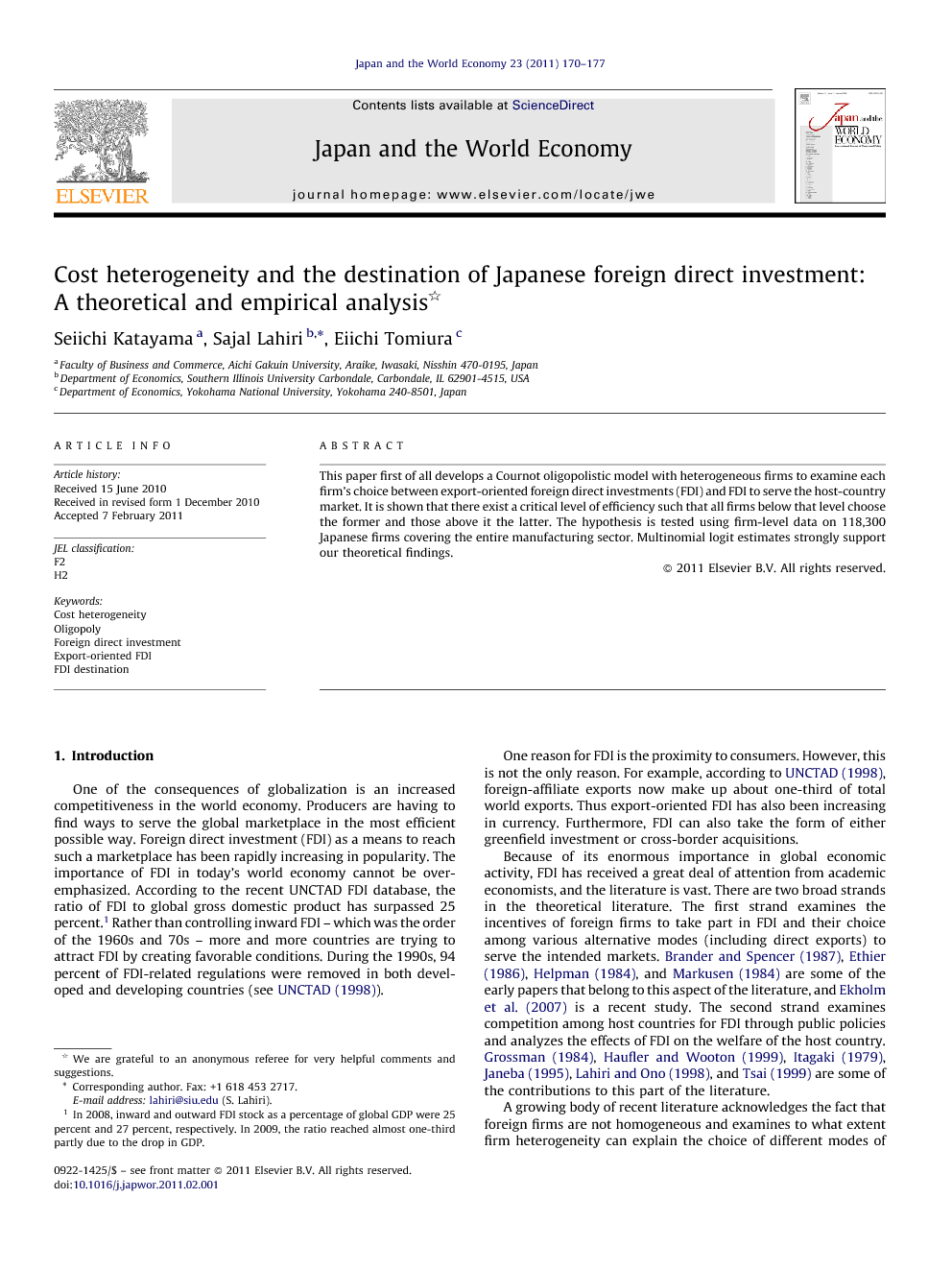 This paper first of all develops a Cournot oligopolistic model with heterogeneous firms to examine each firm's choice between export-oriented foreign direct investments (FDI) and FDI to serve the host-country market. It is shown that there exist a critical level of efficiency such that all firms below that level choose the former and those above it the latter. The hypothesis is tested using firm-level data on 118,300 Japanese firms covering the entire manufacturing sector. Multinomial logit estimates strongly support our theoretical findings.

One of the consequences of globalization is an increased competitiveness in the world economy. Producers are having to find ways to serve the global marketplace in the most efficient possible way. Foreign direct investment (FDI) as a means to reach such a marketplace has been rapidly increasing in popularity. The importance of FDI in today's world economy cannot be overemphasized. According to the recent UNCTAD FDI database, the ratio of FDI to global gross domestic product has surpassed 25 percent.1 Rather than controlling inward FDI – which was the order of the 1960s and 70s – more and more countries are trying to attract FDI by creating favorable conditions. During the 1990s, 94 percent of FDI-related regulations were removed in both developed and developing countries (see UNCTAD (1998)). One reason for FDI is the proximity to consumers. However, this is not the only reason. For example, according to UNCTAD (1998), foreign-affiliate exports now make up about one-third of total world exports. Thus export-oriented FDI has also been increasing in currency. Furthermore, FDI can also take the form of either greenfield investment or cross-border acquisitions. Because of its enormous importance in global economic activity, FDI has received a great deal of attention from academic economists, and the literature is vast. There are two broad strands in the theoretical literature. The first strand examines the incentives of foreign firms to take part in FDI and their choice among various alternative modes (including direct exports) to serve the intended markets. Brander and Spencer (1987), Ethier (1986), Helpman (1984), and Markusen (1984) are some of the early papers that belong to this aspect of the literature, and Ekholm et al. (2007) is a recent study. The second strand examines competition among host countries for FDI through public policies and analyzes the effects of FDI on the welfare of the host country. Grossman (1984), Haufler and Wooton (1999), Itagaki (1979), Janeba (1995), Lahiri and Ono (1998), and Tsai (1999) are some of the contributions to this part of the literature. A growing body of recent literature acknowledges the fact that foreign firms are not homogeneous and examines to what extent firm heterogeneity can explain the choice of different modes of reaching the global marketplace.2Yeaple (2003), and Grossman et al. (2005) examine the choice between vertical and horizontal FDI. Nocke and Yeaple, 2007 and Nocke and Yeaple, 2008 consider the choice between cross-border acquisitions and greenfield FDI. In Helpman et al. (2004) the choice is between greenfield FDI and exports. Grossman and Helpman (2003) and Antras and Helpman (2004) consider the choice between foreign outsourcing and FDI. This paper complements this new literature in three directions. First, we consider an oligopolistic industry rather than a monopolistically competitive one. Second, we consider the choice among heterogeneous firms between export-oriented FDI and FDI to serve the market in the host country. This distinction is important as, for example, FDI in Asia are heavily export-oriented, but FDI in the U.S. are mostly for serving local demand. Third, as opposed to the literature which uses U.S. data, we use Japanese manufacturing data.3 We first of all develop a theoretical oligopolistic model with a number of firms that differ in their efficiency levels. Each of the firms has a choice of either making FDI in one host country and export all its output to its home country or investing in a second host country and sell its output in the host country. We characterize an equilibrium where one set of firms make export-oriented FDI and remaining firms invest in the second country. In the theoretical part we develop a number of hypotheses which are then tested, using multinomial logit analysis, for firm-level data from 118,300 Japanese firms covering the entire manufacturing sector there. Empirical research on FDI has been severely constrained by the lack of availability of firm-level data. In the absence of such data, some of the early studies on FDI focused on host-country factors at aggregate levels (see, for example, Kravis and Lipsey (1982), Wheeler and Mody (1992), and Brainard (1997)). There is now a few micro data sets, and a new literature is growing side-by-side with the theoretical literature on FDI by heterogeneous firms. Head and Ries (2003) found that the Japanese firms investing in low-income countries seem weakly less productive than the firms investing in high-income countries, though their sample is limited to 1070 publicly listed firms. In the firm-country-year panel study for US FDI by Riker and Brainard (1997), the efficiency levels of firms is not considered at all. Helpman et al. (2004) relate intra-industry dispersion of efficiency levels with US firms’ choice between FDI and exports. Finally, Nocke and Yeaple, 2007 and Nocke and Yeaple, 2008 examine the role of efficiency levels among US firms in their choice between cross-border acquisitions and greenfield FDI. Finally, using the same data set as this paper, Tomiura (2007) examines Japanese firms’ choice among outsourcing, FDI and exports. The layout of the paper is as follows. The following section develops the theoretical framework. Section 3 carries out the econometric analysis, and some concluding remarks are made in Section 4.

In view of the enormous importance of foreign direct investment (FDI) in the highly integrated world economy today, not surprisingly the literature on FDI is voluminous. Many different aspects of it have been examined using many different theoretical frameworks. In recent years, there has been a recognition that different types of firm heterogeneities can to an extent explain different modes of serving the global market place such as direct exports, outsourcing, greenfield FDI, cross-border acquisitions, etc. In this paper, we developed a theoretical model where a number of firms which differ in their efficiency levels, make a choice between export-oriented FDI and FDI for serving the market in the host country. Thus our model complements the existing literature by extending the set of options for foreign firms. Our theoretical model predicts that relatively less efficient firms are more likely to make export-oriented FDI. To be more specific, we find an equilibrium allocation of firms between the two host countries such that firms at the lower end of the efficiency distribution make FDI in a host country and export all their outputs back to their home country, and the firm at the higher end of the efficiency distribution invest to serve the market in the host country. In the second half of the paper we test our theoretical prediction empirically, using multinomial logit analysis, for the Japanese manufacturing sector. We find that our data set strongly support the theoretical predictions we derived in this paper.