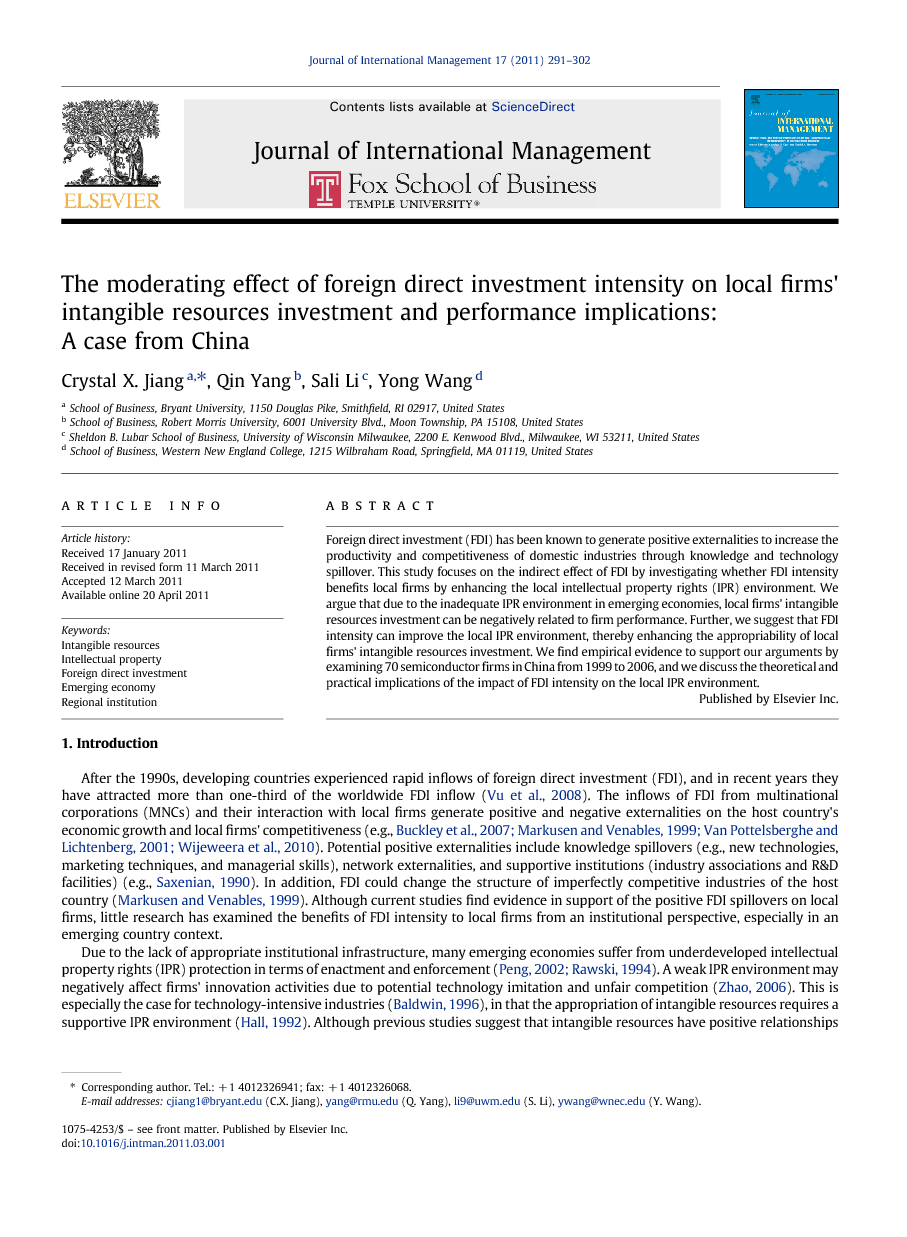 Foreign direct investment (FDI) has been known to generate positive externalities to increase the productivity and competitiveness of domestic industries through knowledge and technology spillover. This study focuses on the indirect effect of FDI by investigating whether FDI intensity benefits local firms by enhancing the local intellectual property rights (IPR) environment. We argue that due to the inadequate IPR environment in emerging economies, local firms' intangible resources investment can be negatively related to firm performance. Further, we suggest that FDI intensity can improve the local IPR environment, thereby enhancing the appropriability of local firms' intangible resources investment. We find empirical evidence to support our arguments by examining 70 semiconductor firms in China from 1999 to 2006, and we discuss the theoretical and practical implications of the impact of FDI intensity on the local IPR environment.

After the 1990s, developing countries experienced rapid inflows of foreign direct investment (FDI), and in recent years they have attracted more than one-third of the worldwide FDI inflow (Vu et al., 2008). The inflows of FDI from multinational corporations (MNCs) and their interaction with local firms generate positive and negative externalities on the host country's economic growth and local firms' competitiveness (e.g., Buckley et al., 2007, Markusen and Venables, 1999, Van Pottelsberghe and Lichtenberg, 2001 and Wijeweera et al., 2010). Potential positive externalities include knowledge spillovers (e.g., new technologies, marketing techniques, and managerial skills), network externalities, and supportive institutions (industry associations and R&D facilities) (e.g., Saxenian, 1990). In addition, FDI could change the structure of imperfectly competitive industries of the host country (Markusen and Venables, 1999). Although current studies find evidence in support of the positive FDI spillovers on local firms, little research has examined the benefits of FDI intensity to local firms from an institutional perspective, especially in an emerging country context. Due to the lack of appropriate institutional infrastructure, many emerging economies suffer from underdeveloped intellectual property rights (IPR) protection in terms of enactment and enforcement (Peng, 2002 and Rawski, 1994). A weak IPR environment may negatively affect firms' innovation activities due to potential technology imitation and unfair competition (Zhao, 2006). This is especially the case for technology-intensive industries (Baldwin, 1996), in that the appropriation of intangible resources requires a supportive IPR environment (Hall, 1992). Although previous studies suggest that intangible resources have positive relationships with innovation (e.g., Bueno et al., 2010) and are positively related to a firm's superior performance (e.g., Amit and Schoemaker, 1993, Choo and Bontis, 2002, Dierickx and Cool, 1989, Itami, 1987 and Juma and Payne, 2004), the positive relationship between intangible resources and firm performance is built on the assumption that firms are able to appropriate part of the value created by their intangible resources (Villalonga, 2004). Less concern has been shown about such a relationship in emerging countries, which have weaker IPR protection than developed countries against firms appropriating their investment in intangible resources. Further, although a weak institution constrains shapes firms' behavior, organizations may also shape the institutional environment in which they are embedded (DiMaggio, 1988, Oliver, 1991 and Powell and DiMaggio, 1991). The increasing inflows of FDI from MNCs and their interaction with local firms create a densely populated and competitive environment, providing all firms both opportunities and pressures to innovate and experiment with new technological knowledge (Beaudry and Breschi, 2003). However, previous studies report that compared with local firms, MNCs could be more likely to be adversely affected by spillover effects, such as allowing local competitors to access to their new products and technology through reverse engineering, invaluable human capital through human resource mobility, and other critical resources that are essential to firm performance (e.g., Shaver and Flyer, 2000 and Yang and Jiang, 2007). Accordingly, we suspect that, to survive the weak IPR protection in an emerging market, MNCs are more likely to react actively to enhance the institutional environment to lessen the negative spillover effects. Therefore, whether the effect of FDI intensity benefits the local institutional environment warrants further investigation. We pose two research questions in this study: (1) What is the relationship between local firms' intangible resources investment and their performance in the context of relatively weak IPR protection? (2) Does geographical FDI intensity moderate the relationship between intangible resources investment and performance of local firms? We intend to make three important contributions to the literature on knowledge management and the FDI spillover effect. First, we aim to enrich our understanding of whether the inadequate IPR framework in an emerging economy challenges the basic premise of the resource-based view (RBV), which suggests that intangible resources are essential to firms' competitive advantage (Barney, 1996, Rumelt, 1984 and Wernerfelt, 1984). Second, our investigation of whether the intensity of FDI inflows enhances the local institutional environment by benefiting local firms' intangible resources investment extends current knowledge on the positive effects of FDI externalities. Third, our research has practical implications for companies that have intangible resources investment in emerging markets by helping them better comprehend the nature of the institutional environment and the effects of their intangible resources investment. To examine these questions, we selected China's semiconductor industry. China is an appropriate context for investigating these questions because the country's institutional IPR protection is still weak in terms of enforcement and enactment (Peng, 2002), yet it has increasingly attracted FDI from MNCs (Buckley et al., 2002). Since local high-technology firms have been actively involved in innovative activities to survive domestic and foreign competition, the Chinese semiconductor industry provides a good platform for our study. We first review the literature available on intangible resources and their relationship with firm performance. Then we focus on the role that geographical FDI intensity may play in the relationship between local firms' investment in intangible resources and performance. We develop our hypotheses on the literature review and discussion. Empirical results are based on the analysis of 70 Chinese firms in the semiconductor industry, from across the country, over an 8-year period. Finally, we draw conclusions and discuss areas for future research.