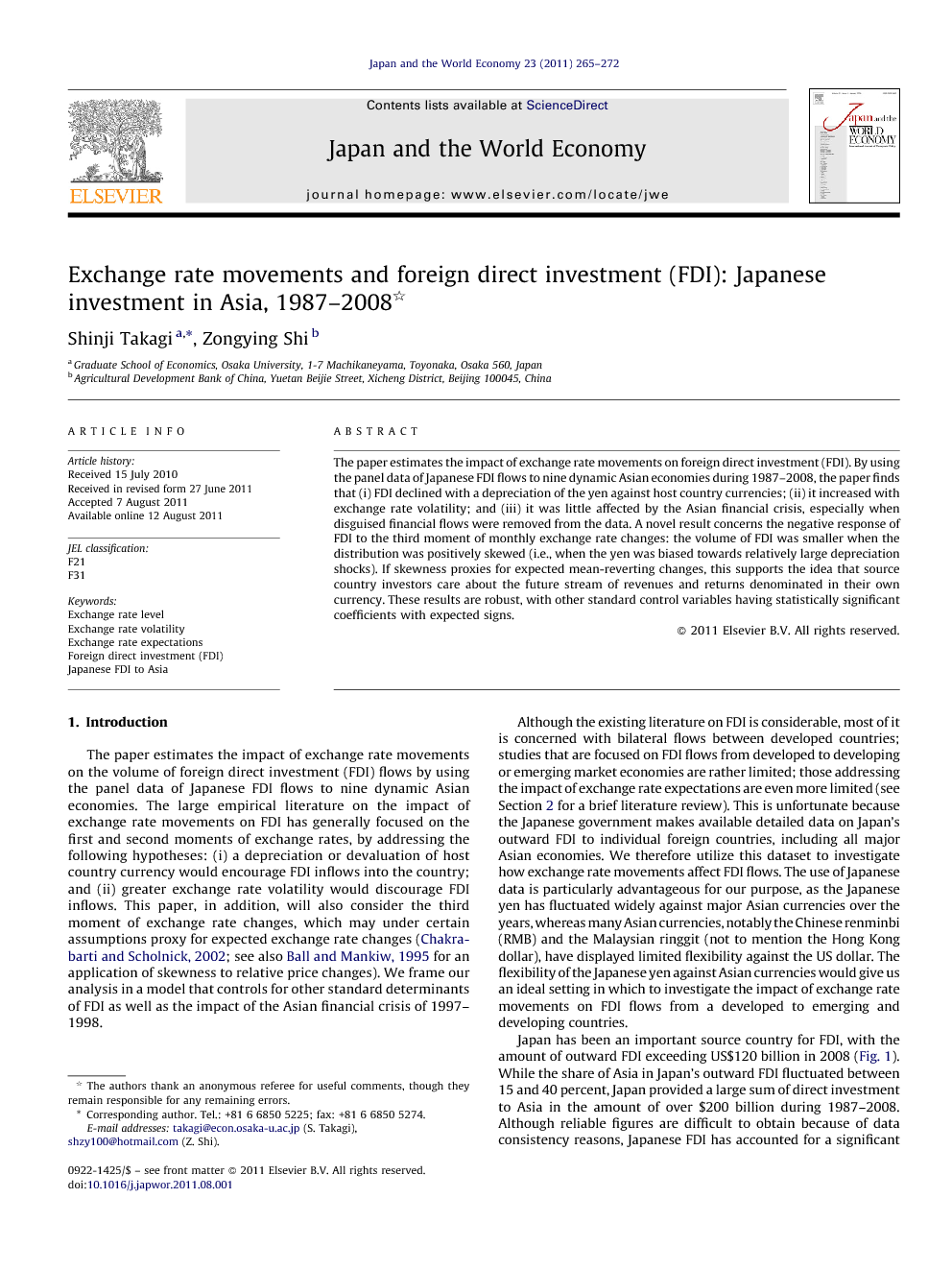 The paper estimates the impact of exchange rate movements on foreign direct investment (FDI). By using the panel data of Japanese FDI flows to nine dynamic Asian economies during 1987–2008, the paper finds that (i) FDI declined with a depreciation of the yen against host country currencies; (ii) it increased with exchange rate volatility; and (iii) it was little affected by the Asian financial crisis, especially when disguised financial flows were removed from the data. A novel result concerns the negative response of FDI to the third moment of monthly exchange rate changes: the volume of FDI was smaller when the distribution was positively skewed (i.e., when the yen was biased towards relatively large depreciation shocks). If skewness proxies for expected mean-reverting changes, this supports the idea that source country investors care about the future stream of revenues and returns denominated in their own currency. These results are robust, with other standard control variables having statistically significant coefficients with expected signs.

The paper estimates the impact of exchange rate movements on the volume of foreign direct investment (FDI) flows by using the panel data of Japanese FDI flows to nine dynamic Asian economies. The large empirical literature on the impact of exchange rate movements on FDI has generally focused on the first and second moments of exchange rates, by addressing the following hypotheses: (i) a depreciation or devaluation of host country currency would encourage FDI inflows into the country; and (ii) greater exchange rate volatility would discourage FDI inflows. This paper, in addition, will also consider the third moment of exchange rate changes, which may under certain assumptions proxy for expected exchange rate changes (Chakrabarti and Scholnick, 2002; see also Ball and Mankiw, 1995 for an application of skewness to relative price changes). We frame our analysis in a model that controls for other standard determinants of FDI as well as the impact of the Asian financial crisis of 1997–1998. Although the existing literature on FDI is considerable, most of it is concerned with bilateral flows between developed countries; studies that are focused on FDI flows from developed to developing or emerging market economies are rather limited; those addressing the impact of exchange rate expectations are even more limited (see Section 2 for a brief literature review). This is unfortunate because the Japanese government makes available detailed data on Japan's outward FDI to individual foreign countries, including all major Asian economies. We therefore utilize this dataset to investigate how exchange rate movements affect FDI flows. The use of Japanese data is particularly advantageous for our purpose, as the Japanese yen has fluctuated widely against major Asian currencies over the years, whereas many Asian currencies, notably the Chinese renminbi (RMB) and the Malaysian ringgit (not to mention the Hong Kong dollar), have displayed limited flexibility against the US dollar. The flexibility of the Japanese yen against Asian currencies would give us an ideal setting in which to investigate the impact of exchange rate movements on FDI flows from a developed to emerging and developing countries. Japan has been an important source country for FDI, with the amount of outward FDI exceeding US$120 billion in 2008 (Fig. 1). While the share of Asia in Japan's outward FDI fluctuated between 15 and 40 percent, Japan provided a large sum of direct investment to Asia in the amount of over $200 billion during 1987–2008. Although reliable figures are difficult to obtain because of data consistency reasons, Japanese FDI has accounted for a significant part of total FDI inflows in some of the individual Asian economies in recent decades. It is estimated, for example, that the share of Japanese FDI in total FDI inflows during 1987–2008 was over 50 percent for the Philippines, nearly 40 percent for Korea and Thailand, over 20 percent for Malaysia, and about 10 percent for China and Singapore.1 Thus, the determinants of FDI flows from Japan to Asian economies remain a topic of considerable academic and policy relevance. In investigating the determinants of Japanese FDI to Asia, we will focus on nine dynamic Asian economies (Asia-9), which together accounted for over 90 percent of Japan's outward FDI to Asia during this period. The rest of the paper is organized as follows. Section 2 presents a brief overview of the empirical literature on the impact of exchange rate movements on FDI, focusing on three potential channels: the level of exchange rates, exchange rate volatility, and exchange rate expectations. Section 3 outlines the specification of our empirical methodology in which exchange rate movements are represented by the first and second moments of exchange rate levels and, as a novel feature, the third moment (skewness of the distribution) of exchange rate changes. Section 4 presents the empirical results, where we argue that the response of FDI to skewness can be interpreted naturally as capturing the expectations channel if we accept the mean-reverting property of floating exchange rates. Section 5 presents concluding remarks. Finally, the Appendix explains the sources of data.

The paper has estimated the impact of exchange rate movements on foreign direct investment (FDI) flows from a developed to developing and emerging market economies, by utilizing the panel data of Japanese outward direct investment flows to nine dynamic Asian economies during 1987–2008. The use of the Japanese dataset has provided an ideal setting for our purpose, not only because it gives a detailed breakdown of outward FDI by destination but also because the yen, unlike the US dollar, fluctuated substantially against the Asian currencies throughout the sample period. Though we have used annual time series, the exchange rate variables were obtained from the distributional properties of monthly exchange rates over the current and preceding year. The paper has found that, consistent with most findings reported in the empirical literature, a current depreciation of host country currencies significantly increased FDI inflows from Japan. The impact of exchange rate volatility on FDI inflows was positive, which is consistent with the predictions of Itagaki (1981) and Cushman (1985) who argued that greater exchange rate uncertainty would promote FDI as a substitute for exports. The impact of the Asian financial crisis on the volume of FDI flows was not statistically significant, especially when China and India were excluded from the data, confirming the conventional wisdom that FDI flows (especially those oriented towards the manufacturing sector, as in this case) are more stable than portfolio flows. A novel result has concerned the significant negative response of FDI to the third moment of exchange rate changes: the volume of FDI flows from Japan was smaller when the distribution was positively skewed (i.e., the yen had bias towards relatively large depreciation shocks). These results are robust, with other standard control variables having statistically significant coefficients with expected signs. Admittedly, how to interpret the consistently robust response of FDI to skewness can be debatable. We have suggested that, in terms of the impact of exchange rate movements on FDI, the first, second, and third moments naturally correspond to the channels of influence discussed in the literature that work through exchange rate levels, volatility, and expectations. Given the broad consensus long established in the literature that the time-series property of floating exchange rates is characterized by mean reversion over the medium term (see, for example, Rogoff, 1996), skewness may well be proxying for expectations of reversal in the future when the exchange rate is hit by relatively large shocks predominantly in one direction. If so, the finding that positive skewness caused the volume of FDI outflows from Japan to decline gives support to the view that source country investors indeed care about the future stream of revenues and returns denominated in their own currency. The idea that source country investors, in making a decision to purchase host economy assets, are interested in the future stream of revenues and returns denominated in their own currency presents implications for policymakers in emerging and developing countries who want to maintain a stable flow of inward FDI. To the extent that actual FDI inflows respond to current and expected exchange rate changes, and expected changes are influenced by large current changes, sharp exchange rate fluctuations may exacerbate the volatility of FDI inflows through multiple channels. Avoiding erratic exchange rate behavior with respect to the currencies of major source countries should therefore help prevent similarly erratic movements in FDI inflows.