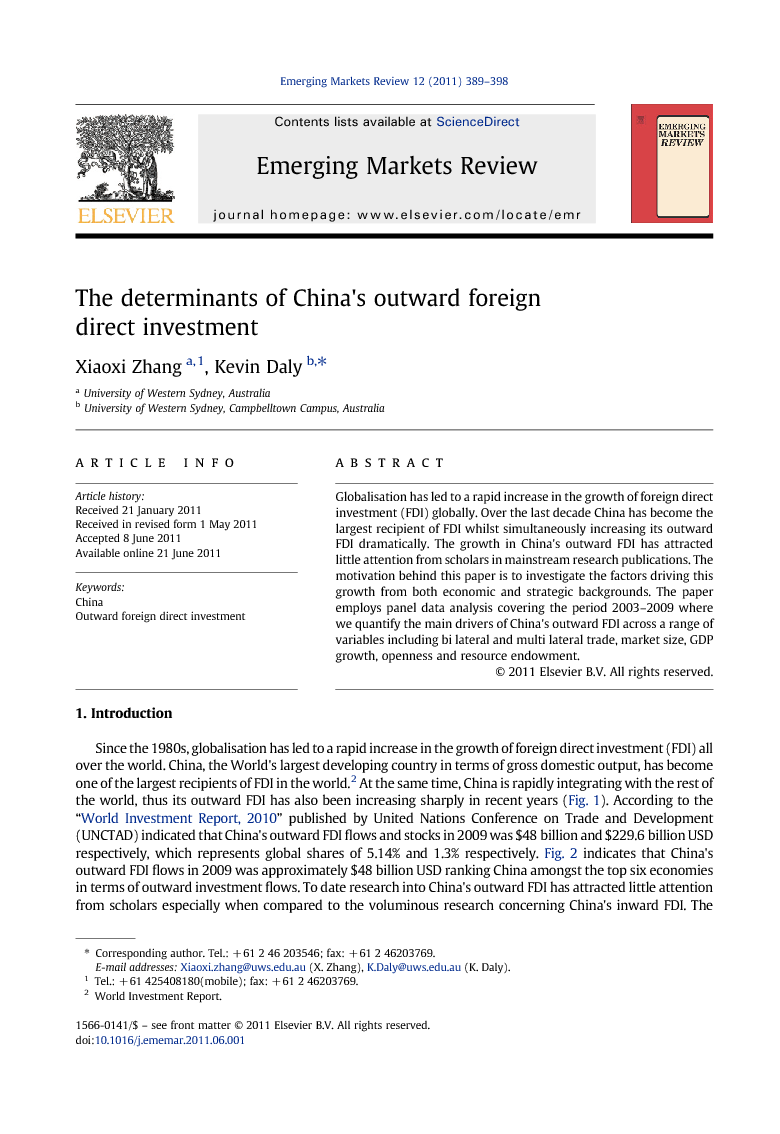 Globalisation has led to a rapid increase in the growth of foreign direct investment (FDI) globally. Over the last decade China has become the largest recipient of FDI whilst simultaneously increasing its outward FDI dramatically. The growth in China's outward FDI has attracted little attention from scholars in mainstream research publications. The motivation behind this paper is to investigate the factors driving this growth from both economic and strategic backgrounds. The paper employs panel data analysis covering the period 2003–2009 where we quantify the main drivers of China's outward FDI across a range of variables including bi lateral and multi lateral trade, market size, GDP growth, openness and resource endowment.

Since the 1980s, globalisation has led to a rapid increase in the growth of foreign direct investment (FDI) all over the world. China, the World's largest developing country in terms of gross domestic output, has become one of the largest recipients of FDI in the world.2 At the same time, China is rapidly integrating with the rest of the world, thus its outward FDI has also been increasing sharply in recent years (Fig. 1). According to the “World Investment Report, 2010” published by United Nations Conference on Trade and Development (UNCTAD) indicated that China's outward FDI flows and stocks in 2009 was $48 billion and $229.6 billion USD respectively, which represents global shares of 5.14% and 1.3% respectively. Fig. 2 indicates that China's outward FDI flows in 2009 was approximately $48 billion USD ranking China amongst the top six economies in terms of outward investment flows. To date research into China's outward FDI has attracted little attention from scholars especially when compared to the voluminous research concerning China's inward FDI. The recent development placing China amongst the top global investors need to be placed in perspective. Before 2004, the size of Chinese overseas direct investment (ODI) was trivial. From 2004, ODI grew significantly, alongside a dramatic expansion of China's current account surplus. Total ODI increased from US$2.85 billion in 2003 to US$56.53 billion in 2009, registering an average growth rate of 55% a year. During the same period, its share in global ODI flow also rose from 0.45 to 5.1%. In 2009, China was not only the largest developing country investor but also the fifth largest investor in the world, following the US, France, Japan and Germany. The main reasons for China's growth in OFDI may relate to its size, China being big in economic terms simply means that a low propensity to invest overseas means a significant addition to global OFDI. China may also be investing overseas in a desire to gain advanced technology, management skills and secure supply of resources in order to guarantee continuous domestic production. In general we identify three stages in the development of China's OFDI; the initial phase from 1982 to 1991, the fluctuating stage from 1992 to 2000 and the high growth period from 2001 till now. More specifically, the “open door” policy of the late of 1970s resulted in the emergence of China's outward FDI from 1982. More specifically, the “open door” policy of the late of 1970s resulted in the emergence of China's outward FDI from 1982. In 1985, China's Ministry of Foreign Economic Relations and Trade released its publication titled ‘Provisions Governing Control and Approval Procedures for Opening Non-Trade Enterprises Overseas’ setting the regulatory framework to guide China's outward FDI. The document clearly specified five requirements for China's outward FDI prioritising investment in advanced technology and equipment abroad, securing the long-term supply of raw materials which are essential for China's economic development, effective in generating foreign currency income for China, utilised for exporting China's machinery, labour services, materials and engineering, in addition to serving China's domestic market. Early in 1992, Deng Xiaoping's tour to the south was the turning point in the development of encouraging China's outward FDI. In September 1992, China's government announced that “we should encourage enterprises to expand their investment abroad and their transnational operations” (Beijing Review, 1992, P. 20). Numerous local and provincial enterprises began to engage in international business activities, for example, they engaged in the acquisition of resources and commercial property in Hong Kong. During the Asian financial crisis, China's outward FDI decreased significantly (Ding, 2000 and Yu, 2005) whilst the development of China's MNE's was slowed due to heavy losses they experienced. In response the central government tightened the approval procedures for outward FDI projects due to capital flight, loss of control over state assets and “leakage” of foreign exchange. By the end of 2001, China's entry into the WTO and the “going abroad” strategy announced in the 10th five-year plan encouraged China's enterprises to invest abroad. In this period, some Chinese enterprises sought out foreign markets which hitherto were protected from foreign competitive pressures (Wong and Chan, 2003 and Zhang, 2003). To stimulate outward investment China also developed measures which simplified foreign exchange transactions including “Notice on Simplifying Foreign Exchange Administration Relating to OFDI 2003”, “Further Measures on Foreign Exchange Administration Stimulating OFDI 2005” and the “Supplement Measures of Foreign Exchange Usage for OFDI 2006” (Luo et al., 2010).

This paper performs an empirical investigation into the determinants of China's outward FDI employing unbalanced panel data analysis approach. The motivation for this research is to test several hypotheses suggested by theory and empirical evidence regarding the determinants of China's outward FDI. In summary we find that China's overseas investments are positively related to international trade, market size, economic growth, degree of openness and endowments of natural resources. To be more specific, we found that China's outward FDI is attracted to countries with high volumes of exports from China, large GDP per capital and rapid GDP growth. Also, China's outward investment is promoted by open economic regimes and resources-rich countries. The above explanatory variables suggest that there are clear differences between China's OFDI and that of developed economies. This study contributes to our understanding of the determinants of China's outward FDI, but we should acknowledge that there are still some limitations. First, our independent variables did not consider foreign government's role in attracting FDI. Future work can add more independent variables such as corporate tax rate and regulatory environment in host countries. Some constraints also prevent us from investigating at the firm level in particular the lack of comprehensive firm-level data. Finally we should mention that the industry distribution of Chinese ODI differs markedly from that of other countries. The primary sector (including resources) accounted for 18.7% of China's total OFDI flow between 2006 and 2008. In comparison, those of the developed and developing economies were only 7.84 and 8.38%, respectively. These large differences were mainly contributed by investments in mining, quarrying and the petroleum industry — the latter contributing 97% of Chinese ODI in the primary sector. This may reflect strategic use of Chinese OFDI to secure a long-term resource supply.