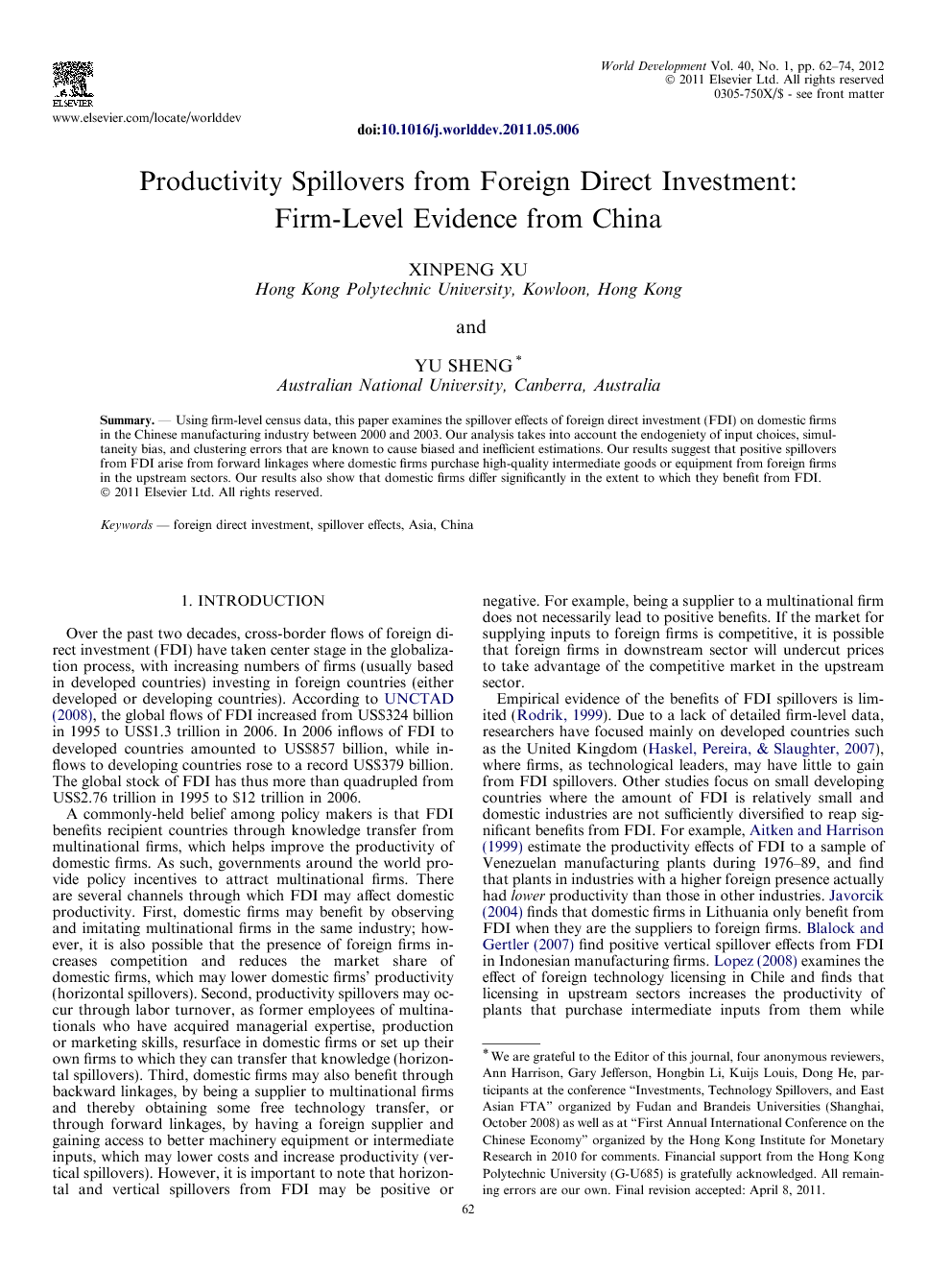 Using firm-level census data, this paper examines the spillover effects of foreign direct investment (FDI) on domestic firms in the Chinese manufacturing industry between 2000 and 2003. Our analysis takes into account the endogeniety of input choices, simultaneity bias, and clustering errors that are known to cause biased and inefficient estimations. Our results suggest that positive spillovers from FDI arise from forward linkages where domestic firms purchase high-quality intermediate goods or equipment from foreign firms in the upstream sectors. Our results also show that domestic firms differ significantly in the extent to which they benefit from FDI.

China has emerged as the largest recipient of foreign direct investment (FDI) in the developing world, yet little is known about the benefits from FDI for domestic firms. Using firm-level census data from China for the period of 2000–2003, this paper examines the various channels of FDI spillovers. We find that FDI has had a significant positive impact on productivity of domestic firms that purchase high-quality intermediate goods with lower input prices, or equipment from FDI firms in the upstream industry. However, we find negative horizontal effects in the case of China after controlling for firm-level market share. The expected positive knowledge spillovers of FDI firms in the same industry as domestic firms are counterbalanced by competition effects arising from the entry of FDI firms. The finding of negative backward spillovers is puzzling. Our further investigation suggests that this may be the result of a set of unique Chinese FDI policies that encourage foreign firms to import raw materials and equipment from the international market. Further, we find that the more export-oriented firms have weaker vertical linkages. Moreover, firms in China do not benefit uniformly from foreign investment, with large and medium-sized firms, non-SOE and exporting firms accruing the greatest benefits from the foreign presence in China. The positive forward spillovers to domestic firms from FDI suggest that Chinese governments’ preferential treatment of foreign firms in past decades may be justifiable. However, the negative backward linkage effect we identify in this paper requires further study when longer time series data are available. For a long time the Chinese government has provided exemption of import duty to those firms that import equipment and inputs, provided that those firms exported their goods to the international market, for fear of a shortage of foreign exchange. This export incentive, although successful in encouraging exports, comes with an implicit cost by reducing the incentive for foreign firms to source domestically (i.e., in China) parts, intermediate inputs, and equipment. Now that China’s foreign exchange reserves have reached about US$2 trillion, concerns about a shortage of foreign exchange are remote and a rethinking of the tax incentive may be warranted. However, notwithstanding the government policy, the benefits from FDI are not automatic, but also require some support for domestic firms. Perhaps more R&D is needed to increase the quality of domestic products to induce foreign firms to source products from the domestic market. Furthermore, as non-SOE firms accrue greater benefits from foreign firms in China than SOE firms, there is an incentive to continue the reform of SOEs.