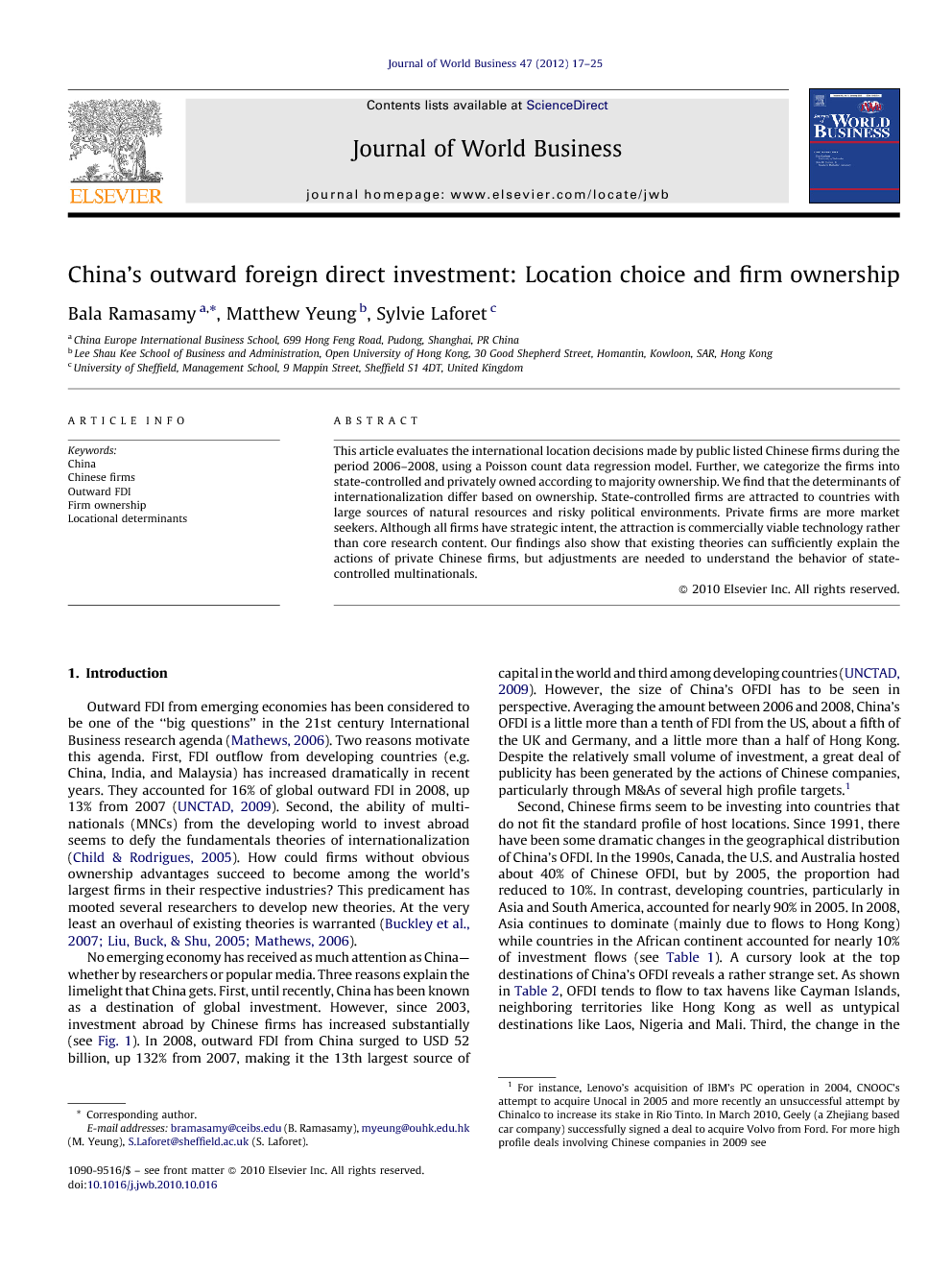 This article evaluates the international location decisions made by public listed Chinese firms during the period 2006–2008, using a Poisson count data regression model. Further, we categorize the firms into state-controlled and privately owned according to majority ownership. We find that the determinants of internationalization differ based on ownership. State-controlled firms are attracted to countries with large sources of natural resources and risky political environments. Private firms are more market seekers. Although all firms have strategic intent, the attraction is commercially viable technology rather than core research content. Our findings also show that existing theories can sufficiently explain the actions of private Chinese firms, but adjustments are needed to understand the behavior of state-controlled multinationals.

Outward FDI from emerging economies has been considered to be one of the “big questions” in the 21st century International Business research agenda (Mathews, 2006). Two reasons motivate this agenda. First, FDI outflow from developing countries (e.g. China, India, and Malaysia) has increased dramatically in recent years. They accounted for 16% of global outward FDI in 2008, up 13% from 2007 (UNCTAD, 2009). Second, the ability of multinationals (MNCs) from the developing world to invest abroad seems to defy the fundamentals theories of internationalization (Child & Rodrigues, 2005). How could firms without obvious ownership advantages succeed to become among the world's largest firms in their respective industries? This predicament has mooted several researchers to develop new theories. At the very least an overhaul of existing theories is warranted (Buckley et al., 2007, Liu et al., 2005 and Mathews, 2006). No emerging economy has received as much attention as China—whether by researchers or popular media. Three reasons explain the limelight that China gets. First, until recently, China has been known as a destination of global investment. However, since 2003, investment abroad by Chinese firms has increased substantially (see Fig. 1). In 2008, outward FDI from China surged to USD 52 billion, up 132% from 2007, making it the 13th largest source of capital in the world and third among developing countries (UNCTAD, 2009). However, the size of China's OFDI has to be seen in perspective. Averaging the amount between 2006 and 2008, China's OFDI is a little more than a tenth of FDI from the US, about a fifth of the UK and Germany, and a little more than a half of Hong Kong. Despite the relatively small volume of investment, a great deal of publicity has been generated by the actions of Chinese companies, particularly through M&As of several high profile targets.1 Second, Chinese firms seem to be investing into countries that do not fit the standard profile of host locations. Since 1991, there have been some dramatic changes in the geographical distribution of China's OFDI. In the 1990s, Canada, the U.S. and Australia hosted about 40% of Chinese OFDI, but by 2005, the proportion had reduced to 10%. In contrast, developing countries, particularly in Asia and South America, accounted for nearly 90% in 2005. In 2008, Asia continues to dominate (mainly due to flows to Hong Kong) while countries in the African continent accounted for nearly 10% of investment flows (see Table 1). A cursory look at the top destinations of China's OFDI reveals a rather strange set. As shown in Table 2, OFDI tends to flow to tax havens like Cayman Islands, neighboring territories like Hong Kong as well as untypical destinations like Laos, Nigeria and Mali. Third, the change in the industrial distribution of OFDI in recent years is also equally dramatic. Manufacturing accounted for nearly 60% of OFDI in the 1990s (Cheung & Qian, 2009), but had dropped to a mere 3% by 2008. Despite sensational media reports, the mining sector accounted for only about 10% of OFDI in 2008 (see Table 3). Sectors that seem to be gaining momentum are in the services sector, particularly business services, finance and retail. The objective of this paper is to consider one aspect of China's OFDI, namely its locational determinants. Despite a few attempts by others (Buckley et al., 2007, Cheng and Ma, 2008, Cheung and Qian, 2009 and Kolstad and Wiig, 2009) to consider this issue systematically, results are inconclusive. The scarcity of such studies is due to limited time series in Chinese OFDI on the one hand,2 and the type of outflow data used on the other.3 Perhaps it is for these reasons that other researchers have resorted to case based analysis to unravel the motivations behind the internationalization process of Chinese firms (Deng, 2007, Deng, 2009 and Rui and Yip, 2008). In this paper, we attempt to merge these two aspects – where and why – of Chinese OFDI by using a unique dataset of listed Chinese companies. Our dataset, which comprises the location of individual firm's FDI, allows us to segment internationalizing Chinese firms into state-owned and private. Thus, the determinants of location decisions based on ownership can be examined. In addition, by utilizing count data, i.e. the number of investment projects in country i, we avoid the tax haven problem that has plagued other similar studies ( Cheng and Ma, 2008, Kolstad and Wiig, 2009 and Morck et al., 2008). Our findings suggest that there is indeed a need to reconsider the existing theories of international location choice, particularly when OFDI of firms from developing country like China is brought into the equation. More specifically, we find that some determinants of location choice among state-owned Chinese firms are inconsistent with existing theories. Our results have a direct implication to host countries intending to attract greater Chinese FDI. Given the differences between state-owned and private firms, targeting the right type of firms based on their locational determinants becomes imperative.