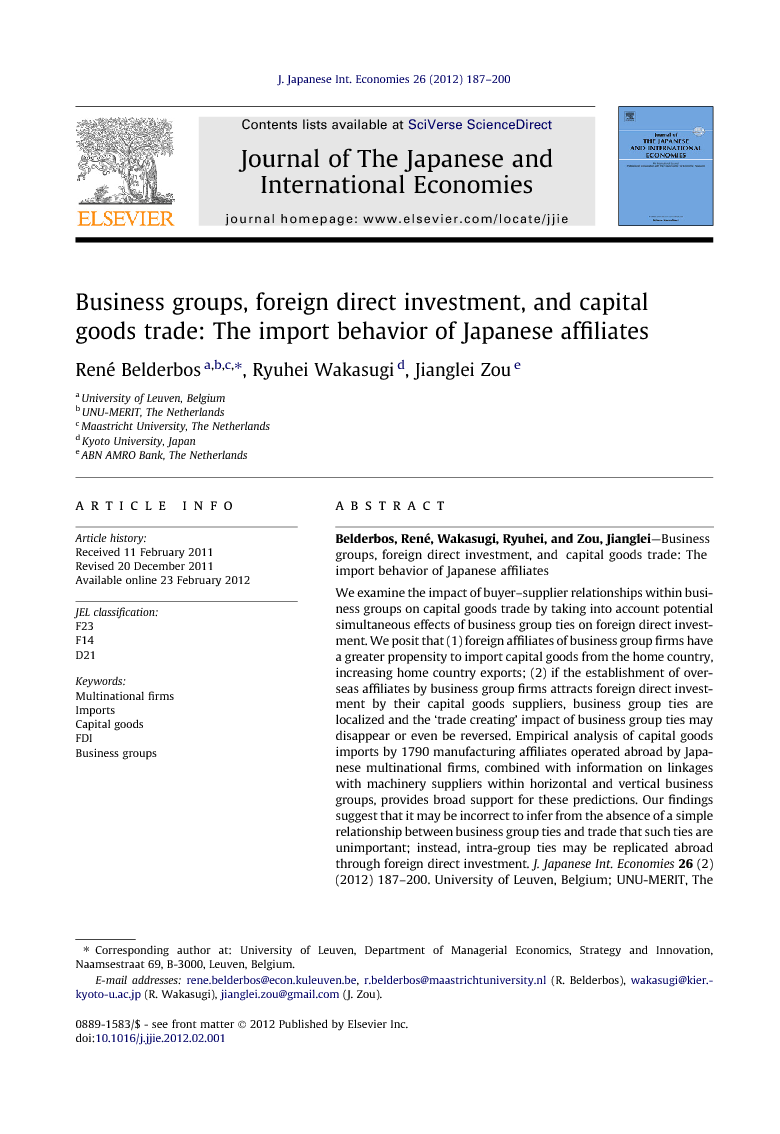 There has been substantial interest in the influence of inter-firm ties within business groups on international trade flows (see e.g. Rauch, 2001). Studies have suggested a trade creating impact of business networks through intra-group dissemination of information on overseas business opportunities, easier contract enforcement within business groups, and cross border replication of vertical trade relationships (e.g. Combes et al., 2005, Rauch, 1996, Belderbos and Sleuwaegen, 1998 and Greaney, 2003). In the context of Japanese business groups (keiretsu) the emphasis has in contrast been on the potential trade reducing effects, in particular of trade with firms outside the business group. Spencer and Qiu (2001) show that network ties within business groups can indeed reduce imports, but that this effect can derive from efficiency enhancing behavior in buyer–supplier relationships. Buyers and sellers in vertical trade relationships may prefer to invest in rent creating relationship-specific investments to improve transaction efficiency. The sunk nature of these investments creates switching costs and reduced purchases from unrelated – and thus-foreign suppliers.1 Business group ties do not only affect trade, they also influence foreign direct investment (FDI) decisions. Prior investments by member firms in a location may create informational externalities and reduce uncertainty concerning the cost and benefits of investment locations to other firms within the group. Investments may also lead to agglomeration externalities through the local provision of specialized intermediates and services and by inducing training of specialized labor. There is ample evidence supporting the notion that these factors cause Japanese business group members to cluster their foreign investments abroad (Belderbos and Carree, 2002, Head et al., 1995, Belderbos and Sleuwaegen, 1996, Blonigen et al., 2005, Martin et al., 1999, Smith and Florida, 1994, Henisz and Delios, 2001 and Belderbos et al., 2011). Although the (potential) impact of business group ties on both trade and FDI has been established, prior empirical research has not taken FDI and trade into account simultaneously.2 In this paper, we demonstrate that the trade and FDI effects of business group ties are intrinsically linked, and that this interrelation can lead to ambiguous effects of business group ties on trade. We extend the analysis of the trade effects of business groups by focusing on the import behavior of the foreign affiliates of Japanese firms. Empirically, we assess how existing relationships of firms with machinery suppliers within vertical and horizontal Japanese business groups (keiretsu) influence the import trade behavior of the firms’ foreign affiliates, while we take into account that business group ties can at the same time induce FDI by the machinery suppliers. Foreign affiliates of business group firms are likely to exhibit a greater dependence on imports from Japan due to existing long-term trade relationships with intra-group machinery suppliers in Japan. However, when the machinery producers of the business group follow their client firm in relocating manufacturing operations abroad, imports are substituted for by machinery purchases from the overseas plants of the group machinery suppliers, and the positive impact on imports of business group ties may disappear. This is not because network ties are not important, but because network ties are replicated abroad. In an analysis of capital goods trade by 1790 overseas manufacturing affiliates of Japanese multinational firms, drawing on unpublished data from an official survey conducted by the Ministry of Economics Trade and Industry (METI), we find broad support for these arguments. We examine affiliates’ imports of capital goods, i.e. manufacturing machinery. From several perspectives, we see this as an interesting focus to examine the role of business group ties on trade. Capital goods exports have been responsible for an increasing share of Japan’s trade surplus, partly due to the investment needs of Japanese multinationals’ foreign affiliates. The main vertical and horizontal business groups include manufacturing machinery producers as member firms, and long-standing supplier–buyer relationships in machinery trade within business groups are likely to be important across a variety of industries. The remainder of this paper is organized as follows. Section 2 reviews the literature on business network effects in international trade and foreign investments. Section 3 describes the data used and Section 4 presents the empirical results. Section 5 concludes and points out directions for further research.

In this paper, we explore the impact of buyer–supplier relationships within business groups on machinery procurement by foreign manufacturing affiliates in the context of potential foreign investment by supplier firms. Machinery suppliers within the business group undertake relationship specific investments to supply client firms within the group with specialized machinery that allows client firms to reduce costs. If the client firm establishes an overseas manufacturing affiliate, it has a relatively large propensity to import from Japan due to the efficiency of the existing supply relationship. Hence, the sunk relationship-specific investments introduce a switching cost that in turn increases trade in case of foreign investment. On the other hand, when the machinery producers of the business group also relocate manufacturing operations abroad, imports are substituted for by machinery purchases from the overseas local plants of the group machinery firms. The positive impact of business group ties on imports may disappear or can even be transformed into a negative impact. One may therefore find no systematic relationship between business group ties and trade, not because business group ties are not important, but because intra-group ties are replicated abroad. We test these predictions on an extensive dataset on capital goods imports by 1790 foreign manufacturing affiliates of Japanese multinational firms in 1996. Tobit analysis of the share of imports from Japan in total capital goods procurement of these manufacturing affiliates provides broad support for the predictions. Affiliates of member firms of horizontal and vertical business groups (keiretsu) with intra-group machinery buyer–supplier relationships exhibit a greater propensity to import from Japan compared with independent firms, but this impact is mitigated or transformed into a smaller propensity to import compared with independent firms for keiretsu of which the intra-group machinery producers have substantial overseas manufacturing investments. The impact of foreign machinery investments transforms the business group impact on imports from a positive into a negative effect for about one third of the vertical keiretsu and for most horizontal keiretsu members that were identified as having the most substantial ties with group machinery manufactures. The potential estimated impacts of supplier–buyers linkages within vertical and horizontal business groups are not trivial: they range between 8% and 12% points difference in the share of imports from Japan and apply to capital good procurement budgets of hundreds of foreign affiliates. Our findings suggest that business groups are likely to have a larger effect on trade than can be observed by simply relating business group (keiretsu) membership at the firm or industry level to trade propensities. Empirical investigation of the role of business groups should take into account that intra-group trade relationships affect both trade and foreign investment, with ambiguous outcomes for total trade flows. It is therefore likely to be incorrect to infer from the absence of a simple relationship between business group ties and trade that such ties are unimportant; instead, intra-group ties may be replicated abroad through foreign direct investment. A number of avenues for further research are open, of which we mention three. First, long-standing buyer–supplier relationships are also present outside vertical and horizontal business groups and are not only a feature of industrial organization in Japan. Future work could examine interrelations between trade and FDI in the context of long-term buyer supplier relationships for firms based in other countries. Second, another possible extension would be to simultaneously model and analyze machinery imports and FDI decisions. This would require more complex modeling, and empirically, the adoption of a simultaneous equation framework. It would focus attention on the underlying reasons why supplier firms engage in foreign investments, which may include benefitting from reduced transportation costs and taking advantage of lower wages, but which may also be due to the bargaining power of client firms demanding local manufacturing in order to obtain the same service level as in Japan. Third, data limitations prevented us from studying later surveys among Japanese affiliates abroad. Although recent studies do not suggest that the specificity of Japanese trade patterns, such as the reliance of foreign affiliates on trade with Japan, is reducing (Greaney, 2009), strengthened competences of foreign firms and increased efforts to reduce costs through standardization (e.g. Paprzycki, 2005) are likely to have reduced the importance of existing Japanese buyer–supplier linkages for overseas affiliates. Replication of this type of study for a sample of affiliates in a more recent period would throw more light on the evolving role of Japanese business groups in international trade.