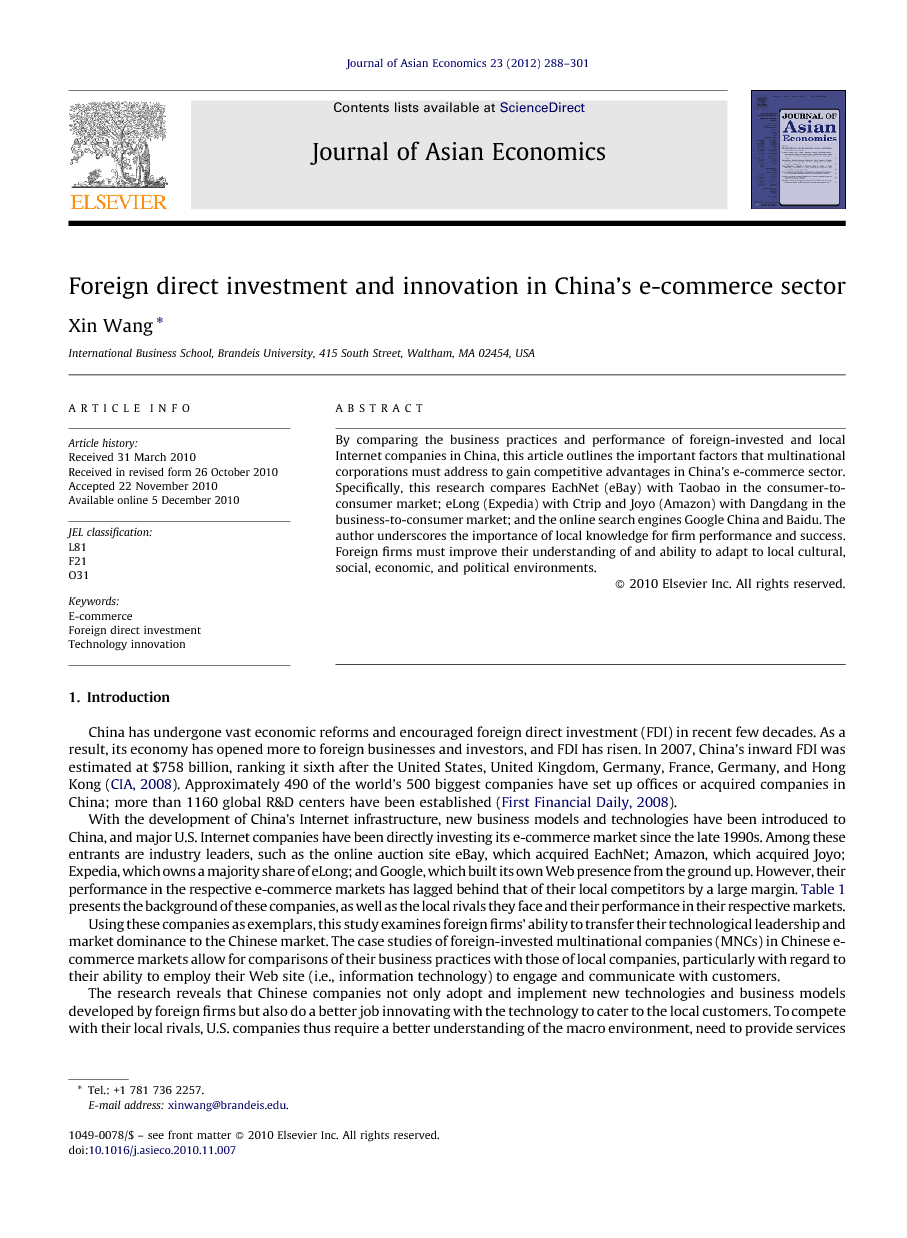 By comparing the business practices and performance of foreign-invested and local Internet companies in China, this article outlines the important factors that multinational corporations must address to gain competitive advantages in China's e-commerce sector. Specifically, this research compares EachNet (eBay) with Taobao in the consumer-to-consumer market; eLong (Expedia) with Ctrip and Joyo (Amazon) with Dangdang in the business-to-consumer market; and the online search engines Google China and Baidu. The author underscores the importance of local knowledge for firm performance and success. Foreign firms must improve their understanding of and ability to adapt to local cultural, social, economic, and political environments.

China has undergone vast economic reforms and encouraged foreign direct investment (FDI) in recent few decades. As a result, its economy has opened more to foreign businesses and investors, and FDI has risen. In 2007, China's inward FDI was estimated at $758 billion, ranking it sixth after the United States, United Kingdom, Germany, France, Germany, and Hong Kong (CIA, 2008). Approximately 490 of the world's 500 biggest companies have set up offices or acquired companies in China; more than 1160 global R&D centers have been established (First Financial Daily, 2008). With the development of China's Internet infrastructure, new business models and technologies have been introduced to China, and major U.S. Internet companies have been directly investing its e-commerce market since the late 1990s. Among these entrants are industry leaders, such as the online auction site eBay, which acquired EachNet; Amazon, which acquired Joyo; Expedia, which owns a majority share of eLong; and Google, which built its own Web presence from the ground up. However, their performance in the respective e-commerce markets has lagged behind that of their local competitors by a large margin. Table 1 presents the background of these companies, as well as the local rivals they face and their performance in their respective markets. Using these companies as exemplars, this study examines foreign firms’ ability to transfer their technological leadership and market dominance to the Chinese market. The case studies of foreign-invested multinational companies (MNCs) in Chinese e-commerce markets allow for comparisons of their business practices with those of local companies, particularly with regard to their ability to employ their Web site (i.e., information technology) to engage and communicate with customers. The research reveals that Chinese companies not only adopt and implement new technologies and business models developed by foreign firms but also do a better job innovating with the technology to cater to the local customers. To compete with their local rivals, U.S. companies thus require a better understanding of the macro environment, need to provide services tailored to the local customers, and must resolve potential conflicts within their organizations that arise from their acquisitions. Even more important, they need to rethink and modify strategies that may have worked in the United States and learn from their Chinese competitors how to maintain a foothold in that unique market. This study therefore outlines in detail the practical insights and recommendations for both MNCs and domestic companies derived from the case studies. The rest of this article is organized as follows: Section 2 contains a review of related literature and some relevant hypotheses for testing. Section 3 provides an overview of China's Internet market and discusses the specific conditions that mark the e-commerce industry, consumers, and major players in the market. Section 4 presents the case studies as a means to contrast some U.S. multinationals with their local rivals in several markets, according to their entry strategy, investment decisions, marketing practices, and competition outcomes. The conclusion in Section 5 offers a discussion of the major implications of these case studies and recommendations for both MNCs and domestic companies.