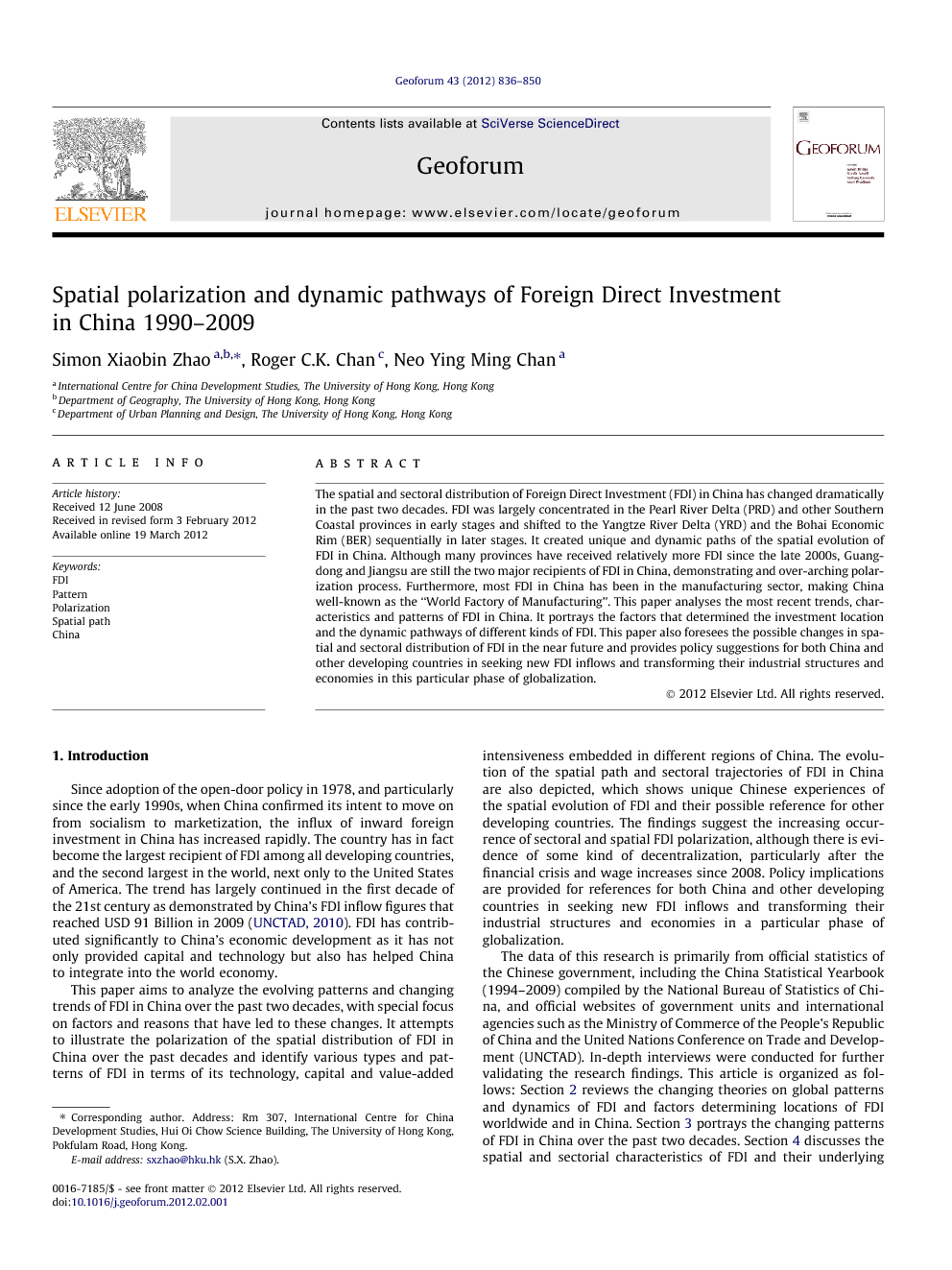 The spatial and sectoral distribution of Foreign Direct Investment (FDI) in China has changed dramatically in the past two decades. FDI was largely concentrated in the Pearl River Delta (PRD) and other Southern Coastal provinces in early stages and shifted to the Yangtze River Delta (YRD) and the Bohai Economic Rim (BER) sequentially in later stages. It created unique and dynamic paths of the spatial evolution of FDI in China. Although many provinces have received relatively more FDI since the late 2000s, Guangdong and Jiangsu are still the two major recipients of FDI in China, demonstrating and over-arching polarization process. Furthermore, most FDI in China has been in the manufacturing sector, making China well-known as the “World Factory of Manufacturing”. This paper analyses the most recent trends, characteristics and patterns of FDI in China. It portrays the factors that determined the investment location and the dynamic pathways of different kinds of FDI. This paper also foresees the possible changes in spatial and sectoral distribution of FDI in the near future and provides policy suggestions for both China and other developing countries in seeking new FDI inflows and transforming their industrial structures and economies in this particular phase of globalization.

Since adoption of the open-door policy in 1978, and particularly since the early 1990s, when China confirmed its intent to move on from socialism to marketization, the influx of inward foreign investment in China has increased rapidly. The country has in fact become the largest recipient of FDI among all developing countries, and the second largest in the world, next only to the United States of America. The trend has largely continued in the first decade of the 21st century as demonstrated by China’s FDI inflow figures that reached USD 91 Billion in 2009 (UNCTAD, 2010). FDI has contributed significantly to China’s economic development as it has not only provided capital and technology but also has helped China to integrate into the world economy. This paper aims to analyze the evolving patterns and changing trends of FDI in China over the past two decades, with special focus on factors and reasons that have led to these changes. It attempts to illustrate the polarization of the spatial distribution of FDI in China over the past decades and identify various types and patterns of FDI in terms of its technology, capital and value-added intensiveness embedded in different regions of China. The evolution of the spatial path and sectoral trajectories of FDI in China are also depicted, which shows unique Chinese experiences of the spatial evolution of FDI and their possible reference for other developing countries. The findings suggest the increasing occurrence of sectoral and spatial FDI polarization, although there is evidence of some kind of decentralization, particularly after the financial crisis and wage increases since 2008. Policy implications are provided for references for both China and other developing countries in seeking new FDI inflows and transforming their industrial structures and economies in a particular phase of globalization. The data of this research is primarily from official statistics of the Chinese government, including the China Statistical Yearbook (1994–2009) compiled by the National Bureau of Statistics of China, and official websites of government units and international agencies such as the Ministry of Commerce of the People’s Republic of China and the United Nations Conference on Trade and Development (UNCTAD). In-depth interviews were conducted for further validating the research findings. This article is organized as follows: Section 2 reviews the changing theories on global patterns and dynamics of FDI and factors determining locations of FDI worldwide and in China. Section 3 portrays the changing patterns of FDI in China over the past two decades. Section 4 discusses the spatial and sectorial characteristics of FDI and their underlying reasons. Section 5 depicts the spatial paths of the dynamic evolution of FDI for the four kinds of FDI in China. The final section generates policy and theoretical as well as policy implications emerging from this study.

This paper analyses the evolving patterns and changing trends of FDI in China over the past two decades, with special focus on factors and reasons that have shaped these changes. The spatial and sectoral distribution of Foreign Direct Investment (FDI) in China has changed dramatically in the past two decades. In the early 1990s, FDI was concentrated in the East and South of China due to cultural links (such as Guangdong and Fujian) with investor countries, relational networks, geographical proximity (like Guangdong with Hong Kong), industrial linkages (such as FDI in traditional industry centers in China) and market potential (in large cities). Subsequently, there was a shift of FDI from PRD and other Southern Coastal provinces to YRD and BER. In the 1990s, as the effect of cultural links was diluted, Hong Kong’s investment in Guangdong declined. Traditional manufacturing centers did not integrate well with the trends in global economic development. The proportion of FDI from traditional sources (Hong Kong and Taiwan) has constantly decreased over the past decade. The spatial and sectoral distributions of FDI, as well as its origins, have diversified since late 1990s, but polarization of FDI has broadened. As more and more local governments zealously promoted investment from abroad, the spatial distribution of FDI became decentralized and the origins of FDI have also become more diversified. However, decentralization of FDI has not been significant. The concentration of FDI in a few provinces or cities has, in fact, become more severe. This shows that the polarization of FDI distribution has been intensifying in China. Analysis of dynamic changes in FDI patterns shows clearly increasing polarization and concentration of FDI in a limited number of coastal areas. The reasons for such concentration and polarization patterns are manifold. First, there are initial factors such as cultural links, guanxi, physical proximity, industrial linkage, export orientation and market potential that affected the spatial and sectoral distribution of FDI in early stages. Secondly, changes caused by locational considerations such as proximity to seaports and service hubs, industrial clustering (agglomeration), changes of internal market demand, investment orientations and constraints of resources/technology/labor conditions, as well as public policies, have affected the spatial and sectoral distribution of Foreign Direct Investment in past decade, and are likely to continue to do so in the future. This study has further analyzed different kinds of FDI and their unique spatial paths in China. This reveals that different types of FDI have different locational considerations and hence form their own spatial paths. Due to different kinds of FDI representing different levels of growth, their aggregate outcome forms the overall spatial path of FDI in different periods. All of these analyses provide a solid base for understanding FDI behaviors in both China and other developing countries. The study shows the imbalanced distribution of FDI in China, which has exacerbated the problem of social inequality in China. The concentration of FDI in low-end and labor-intensive manufacturing industries has caused China to be only the “last stop” of the global production chain. This should alert the Chinese Government to seek new industrial policy instruments that can sustain and transform its industrial structure in particular and its economy in general. The results of the study provide references for not only Chinese but other developing countries’ governments as well as theoretical contributions to the existing literature on FDI.