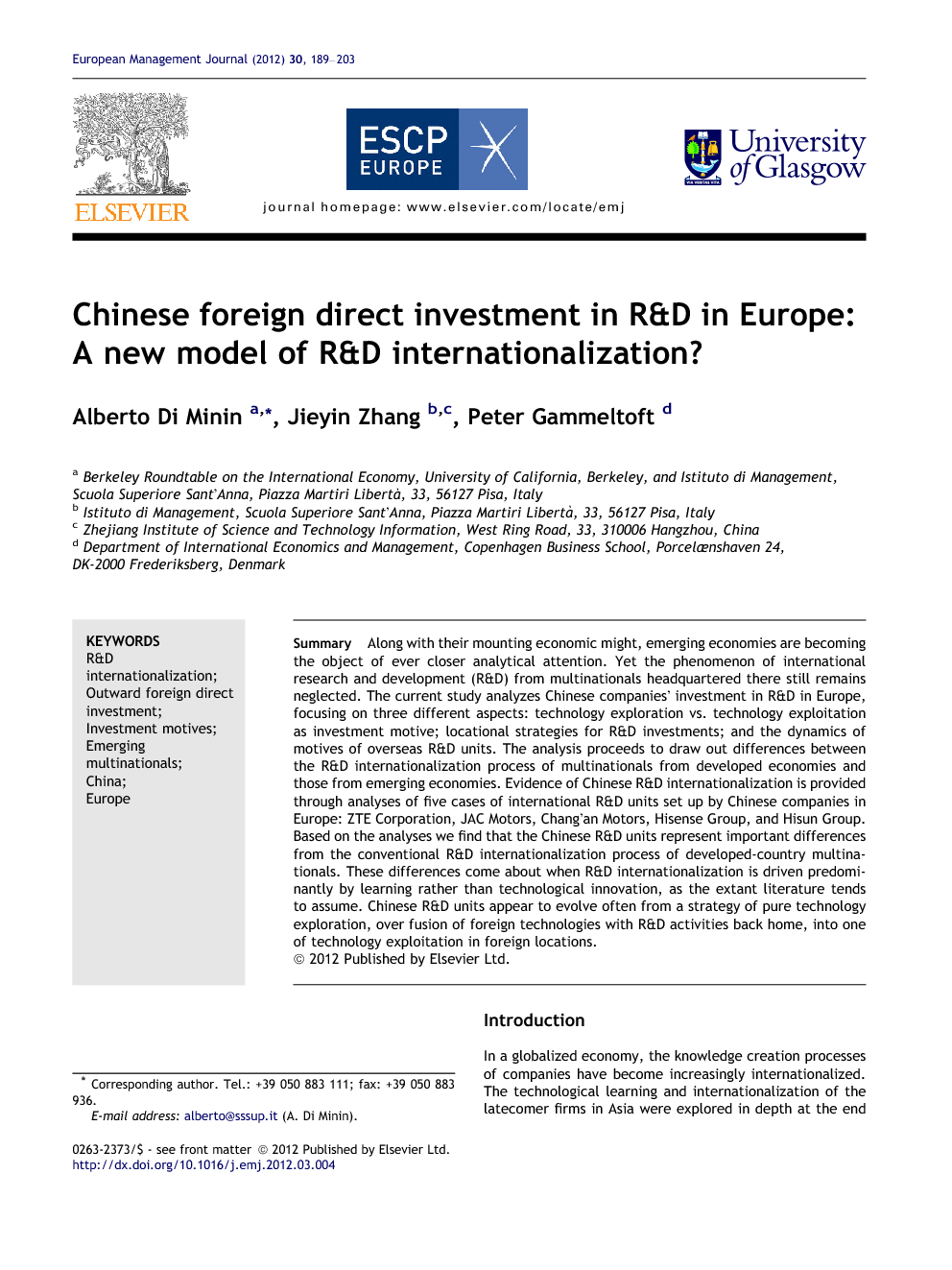 Along with their mounting economic might, emerging economies are becoming the object of ever closer analytical attention. Yet the phenomenon of international research and development (R&D) from multinationals headquartered there still remains neglected. The current study analyzes Chinese companies’ investment in R&D in Europe, focusing on three different aspects: technology exploration vs. technology exploitation as investment motive; locational strategies for R&D investments; and the dynamics of motives of overseas R&D units. The analysis proceeds to draw out differences between the R&D internationalization process of multinationals from developed economies and those from emerging economies. Evidence of Chinese R&D internationalization is provided through analyses of five cases of international R&D units set up by Chinese companies in Europe: ZTE Corporation, JAC Motors, Chang’an Motors, Hisense Group, and Hisun Group. Based on the analyses we find that the Chinese R&D units represent important differences from the conventional R&D internationalization process of developed-country multinationals. These differences come about when R&D internationalization is driven predominantly by learning rather than technological innovation, as the extant literature tends to assume. Chinese R&D units appear to evolve often from a strategy of pure technology exploration, over fusion of foreign technologies with R&D activities back home, into one of technology exploitation in foreign locations.

In a globalized economy, the knowledge creation processes of companies have become increasingly internationalized. The technological learning and internationalization of the latecomer firms in Asia were explored in depth at the end of the 20th century (Hobday, 1995, Kim, 1997 and Sachwald, 2001). Since the 21st century, the globalization of Chinese companies has gained academic attention (Child and Rodrigues, 2005, Deng, 2007, Fan, 2006, Gao et al., 2007, Hong and Sun, 2006, Taylor, 2002 and Wong, 1999). In the past decades, foreign direct investment (FDI) into developing and transition countries has increased, and China has become the most attractive host country for FDI (UNCTAD, 2005). On the one hand, China has worked hard to attract foreign investment in R&D to enhance the technology capabilities of Chinese companies (Wu & Callahan, 2005). On the other hand, along with their increasing involvement in global competition, Chinese Multinational Corporations (MNCs) have also begun to expand overseas, especially since the mid-1990s (Tung, 2005). Chinese globalization owes much to the “going out” (Zouchuqu) strategy enforced by the Chinese government since 1999,which encourages Chinese science and technology (S&T)-intensive companies, in particular the successful ones, to go global for both technology upgrading and brand building (OECD, 2008). Chinese companies have attained a key role within innovation in China, in the sense that they already accounted for 70.4% of the R&D funding source in China in 2007.1 In recent years, both the Chinese government and Chinese academia have become more concerned about how to cultivate the R&D capabilities of domestic Chinese companies and compete with global MNCs. In 2006, the Chinese government implemented the National Medium and Long-Term Science and Technology Plan (2006–2020) as its central S&T policy. The policy emphasizes building up an innovation-oriented country and an enterprise-centered national technology innovation system by keeping to the path of “indigenous innovation with Chinese characteristics” (OECD, 2008). Meanwhile, Chinese scholars have also opened up in-depth discussion on the technology strategies of Chinese domestic companies (Gao et al., 2007, Wu and Callahan, 2005 and Xie and White, 2006). Recent studies have begun to show intense interest in the global technological learning and innovation activities of Chinese companies. Scholars adopt an “asset-seeking” perspective to emphasize that Chinese outward FDI serves the purpose of building competitive competence (Deng, 2007). Some of the studies adopt the “latecomer catch-up process” perspective to determine how Chinese companies can cultivate their innovation capabilities (Child and Rodrigues, 2005, Fan, 2006 and Gao et al., 2007). Moreover, there are also some scholars who specifically focus on the contribution of overseas innovative activities to Chinese competitive advantage (Chen and Tong, 2003 and von Zedtwitz, 2005). However, most of the studies analyze international R&D activities as part of Chinese outward FDI and adopt a macro-perspective to investigate this emerging phenomenon. Up to now, we know surprisingly little about how Chinese MNCs deal with their much stronger counterparts in industrialized countries. What is missing in academia, and what we think is relevant, is an explorative discussion on Chinese R&D internationalization with first-hand evidence from Chinese overseas R&D subsidiaries in developed countries. This paper attempts to understand the motives that impel Chinese MNCs to conduct international R&D activities in a highly competitive environment such as Europe. We explore the evolution of motives, and we ask whether the maturation models that helped us understanding the international evolution of multinationals headquartered in industrialized countries work also when considering the behavior of Chinese MNCs abroad. This paper focuses on the following research questions: (1) To what extent have Chinese companies set up R&D units in Europe? (2) Why do Chinese MNCs establish Chinese R&D units in Europe and how do their motives dynamically evolve? (3) Are the R&D motives of Chinese companies different from those of MNCs from developed countries? The paper is organized into six sections. The following (second) section looks at the literature on R&D internationalization; the third section discusses the processes of internationalization and innovation of Chinese companies; the fourth section introduces the research methodology and data collection process; the fifth section analyzes our case studies; and the sixth and final section concludes our study.