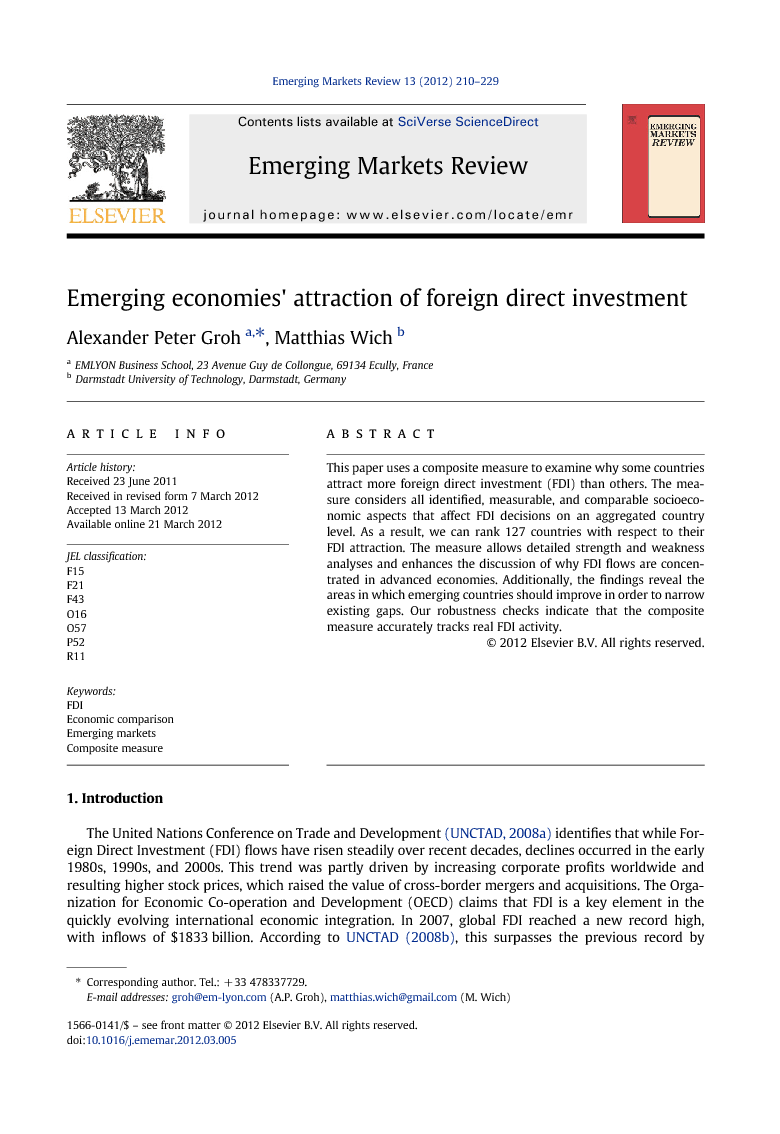 This paper uses a composite measure to examine why some countries attract more foreign direct investment (FDI) than others. The measure considers all identified, measurable, and comparable socioeconomic aspects that affect FDI decisions on an aggregated country level. As a result, we can rank 127 countries with respect to their FDI attraction. The measure allows detailed strength and weakness analyses and enhances the discussion of why FDI flows are concentrated in advanced economies. Additionally, the findings reveal the areas in which emerging countries should improve in order to narrow existing gaps. Our robustness checks indicate that the composite measure accurately tracks real FDI activity.

The United Nations Conference on Trade and Development (UNCTAD, 2008a) identifies that while Foreign Direct Investment (FDI) flows have risen steadily over recent decades, declines occurred in the early 1980s, 1990s, and 2000s. This trend was partly driven by increasing corporate profits worldwide and resulting higher stock prices, which raised the value of cross-border mergers and acquisitions. The Organization for Economic Co-operation and Development (OECD) claims that FDI is a key element in the quickly evolving international economic integration. In 2007, global FDI reached a new record high, with inflows of $1833 billion. According to UNCTAD (2008b), this surpasses the previous record by some $400 billion. OECD (2008) emphasizes that the growth in FDI flows reflect both an increase in size and the number of individual FDI transactions, which are typically a result of cross-border mergers and acquisitions or as green field investment. Although the flow to emerging countries has increased, developed countries still comprise about 75% of the world's inward FDI stocks (UNCTAD, 2008b). FDI plays a significant role in the development of international trade, and it helps to establish direct, stable, and long-lasting links between economies. OECD (2008) discusses that FDI can serve as an important vehicle for local enterprise development, strengthening the competitiveness of both the recipient and investor. The decision-making process of a foreign investor is complex and has been discussed in the literature at the macro and micro level. Many factors have been identified that influence FDI flows. Geographic patterns and the determinants of spatial FDI activity are complex, numerous, and site-specific. A sufficient set of parameters that drive FDI on a global scope has still not yet been detected. While there are certainly some factors that explain FDI from or towards certain countries, the same factors need not be relevant on a broad cross-sectional scale. This paper contributes to the problem of explaining inward FDI flows on a large sample of countries. We provide an indicator of country-specific FDI that reveals the strengths and weaknesses of economies and measures a host country's ability to attract FDI. This measure, henceforth referred to as the FDI Index, considers all identified, measurable, and comparable aspects that affect FDI decisions. As a result, we can rank 127 countries according to their attractiveness to foreign direct investors and contribute to the discussion of why some are more attractive to them than others. The index allows a better understanding of spatial FDI activity on a world-wide scale, which can help policymakers determine how to improve their country's attractiveness to foreign investors. We compare the strengths and weaknesses of advanced and emerging economies to identify the factors that explain why FDI flows remain concentrated in advanced economies. These factors are mainly related to the legal and political systems and to the infrastructure in the emerging countries. We conduct several robustness checks to determine the quality of the FDI Index. We benchmark the FDI Index with similar indicators (namely the FDI Inward Potential Index, the Global Competitiveness Index, and the Global Enabling Trade Index) that focus on different aspects of FDI attractiveness. The analyses prove that our composite score more accurately measures a country's ability to attract FDI than the other indicators. This is due to the inclusion of only criteria that are identified relevant in literature, to the chosen index structure and to the selection of quality data series. Finally, we confirm that no individual data series or combination thereof has a higher explanatory power for actual FDI activity and show that our index also allows classifying emerging and developed economies via a cut-off score. Section 2 is a literature overview of the determinants for FDI decisions. Section 3 presents the data and methodology for our index and the sample countries, followed by a description of the construction technique of the composite measure. In Section 4, we discuss the results and several robustness checks. Concluding remarks are given in Section 5.

We present a composite index that measures a country's attractiveness to foreign direct investors. We define four key drivers that affect a host country's FDI attractiveness: economic activity, the legal and political system, the business environment, and infrastructure. We introduce different calculation methods for our measure of a country's attractiveness to foreign direct investors, the FDI Index, namely normalization, weighting, and aggregation. Since the results are sensitive to these techniques, we propose four alternative index constructions, and measure the explanatory power of these alternatives by correlating the country scores with actual FDI inward flows. The preferred index version correlates with inward FDI at 0.543. To gain further evidence on the quality of the approach, we benchmark the FDI Index with three commonly-used indicators. The analyses reveal that the FDI Index is the most appropriate measure of a country's ability to attract FDI. The rationale for this superiority is given by the restriction to include only the criteria identified relevant in literature, by the index structure, and the selection of quality data series to assess these criteria. In several robustness checks, we confirm that no other data series has a higher explanatory power for FDI activity than the FDI Index. The FDI Index supports the published evidence of why FDI inward flows are concentrated in advanced economies, which still account for 75% of inward FDI. Emerging and developing countries are less attractive to foreign investors due to their poor legal and political systems and meager infrastructures. Hence, improvements in these areas are required to attract future FDI. Data availability limits our sample of countries for the FDI Index. Unfortunately, the full set of data series is not available for more emerging economies, especially those in Africa. In future research, we will seek new data to cover more countries and similarly calculate indices according to the discussed methods. This will allow us to set up a panel that can be further investigated. In parallel, we will focus on the optimization of the index structure and on the number of required parameters, and search for weighting schemes that might still improve the tracking power of the FDI Index. The FDI Index provides a new set of control variables for subsequent research. Particular constructs, the individual key drivers, and the overall index score qualify for further analyses. It is, for example, interesting to match differences in the scores of countries with bilateral FDI activity. The scores could further be added to or replace variables in gravity models on FDI or international trade. The index offers numerous analyses and as data become available, we hope to improve its predictability and coverage.