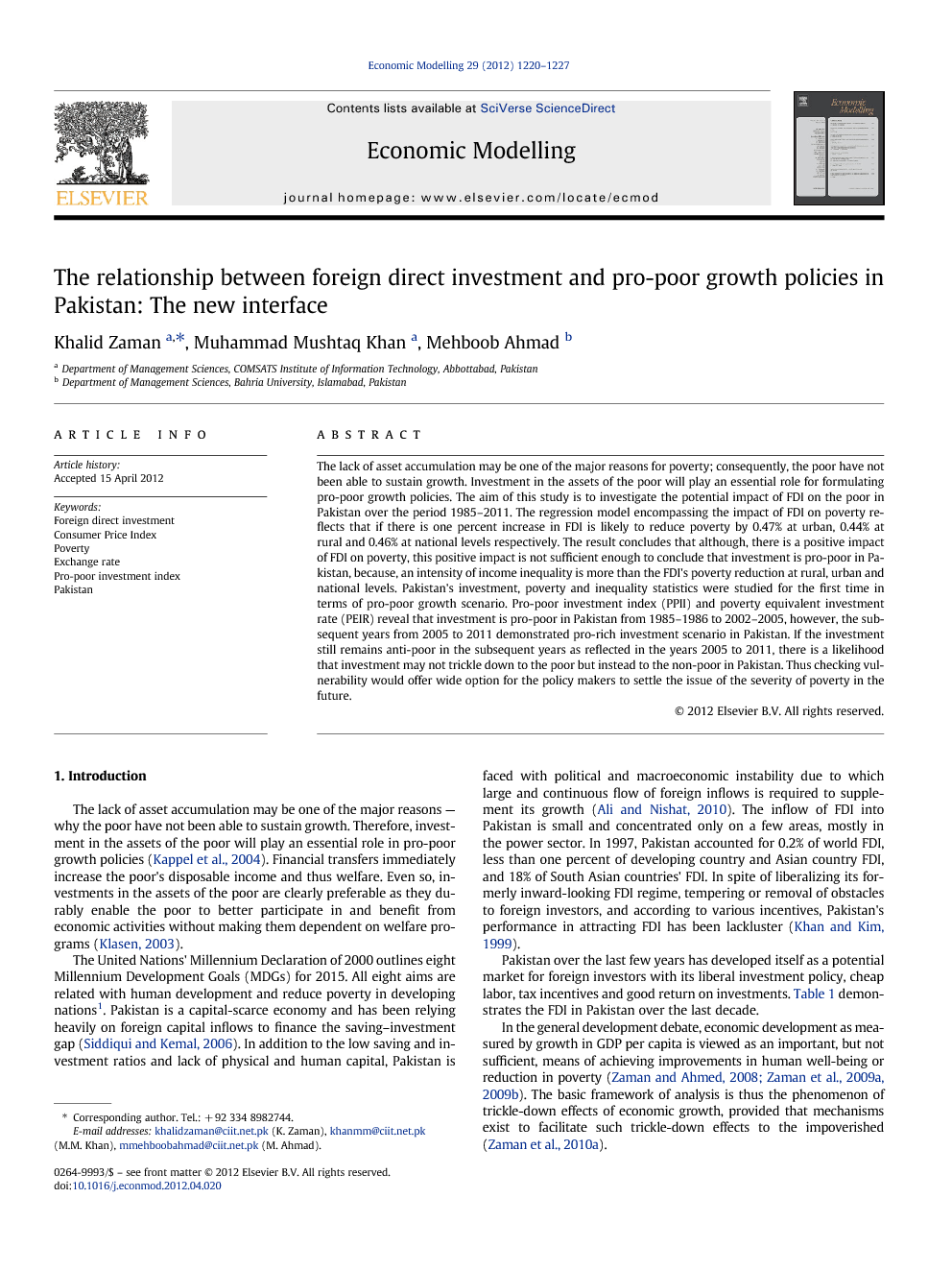 The lack of asset accumulation may be one of the major reasons for poverty; consequently, the poor have not been able to sustain growth. Investment in the assets of the poor will play an essential role for formulating pro-poor growth policies. The aim of this study is to investigate the potential impact of FDI on the poor in Pakistan over the period 1985–2011. The regression model encompassing the impact of FDI on poverty reflects that if there is one percent increase in FDI is likely to reduce poverty by 0.47% at urban, 0.44% at rural and 0.46% at national levels respectively. The result concludes that although, there is a positive impact of FDI on poverty, this positive impact is not sufficient enough to conclude that investment is pro-poor in Pakistan, because, an intensity of income inequality is more than the FDI's poverty reduction at rural, urban and national levels. Pakistan's investment, poverty and inequality statistics were studied for the first time in terms of pro-poor growth scenario. Pro-poor investment index (PPII) and poverty equivalent investment rate (PEIR) reveal that investment is pro-poor in Pakistan from 1985–1986 to 2002–2005, however, the subsequent years from 2005 to 2011 demonstrated pro-rich investment scenario in Pakistan. If the investment still remains anti-poor in the subsequent years as reflected in the years 2005 to 2011, there is a likelihood that investment may not trickle down to the poor but instead to the non-poor in Pakistan. Thus checking vulnerability would offer wide option for the policy makers to settle the issue of the severity of poverty in the future.

The lack of asset accumulation may be one of the major reasons — why the poor have not been able to sustain growth. Therefore, investment in the assets of the poor will play an essential role in pro-poor growth policies (Kappel et al., 2004). Financial transfers immediately increase the poor's disposable income and thus welfare. Even so, investments in the assets of the poor are clearly preferable as they durably enable the poor to better participate in and benefit from economic activities without making them dependent on welfare programs (Klasen, 2003). The United Nations' Millennium Declaration of 2000 outlines eight Millennium Development Goals (MDGs) for 2015. All eight aims are related with human development and reduce poverty in developing nations1. Pakistan is a capital-scarce economy and has been relying heavily on foreign capital inflows to finance the saving–investment gap (Siddiqui and Kemal, 2006). In addition to the low saving and investment ratios and lack of physical and human capital, Pakistan is faced with political and macroeconomic instability due to which large and continuous flow of foreign inflows is required to supplement its growth (Ali and Nishat, 2010). The inflow of FDI into Pakistan is small and concentrated only on a few areas, mostly in the power sector. In 1997, Pakistan accounted for 0.2% of world FDI, less than one percent of developing country and Asian country FDI, and 18% of South Asian countries' FDI. In spite of liberalizing its formerly inward-looking FDI regime, tempering or removal of obstacles to foreign investors, and according to various incentives, Pakistan's performance in attracting FDI has been lackluster (Khan and Kim, 1999). Pakistan over the last few years has developed itself as a potential market for foreign investors with its liberal investment policy, cheap labor, tax incentives and good return on investments. Table 1 demonstrates the FDI in Pakistan over the last decade. In the general development debate, economic development as measured by growth in GDP per capita is viewed as an important, but not sufficient, means of achieving improvements in human well-being or reduction in poverty (Zaman and Ahmed, 2008, Zaman et al., 2009a and Zaman et al., 2009b). The basic framework of analysis is thus the phenomenon of trickle-down effects of economic growth, provided that mechanisms exist to facilitate such trickle-down effects to the impoverished (Zaman et al., 2010a). According to Tambunan (2005, p.1), The most important mechanism by which trickle-down occurs is via economic growth-led employment creation. FDI may have positive effects on poverty reduction mainly through three ways: (i) labor intensive economic growth with export growth as the most important engine, (ii) technological, innovation and knowledge spillover effects from FDI-based firms on local economy, and (iii) poverty alleviation government programs or projects financed by tax revenues collected from FDI-based firms. Pakistan's commitment is to reduce poverty by stimulating growth in the production sector; creating adequate employment opportunities; improving income distribution; and harnessing the country's economic competitiveness through economic liberalization, deregulation and transparent privatization (GoP, 2010). The Government prioritized the 17 pro-poor sectors through the Medium Term Expenditure Framework (MTEF) from 2008–2009 to 2010–2011. The following social safety nets are major initiatives to reinforce the Government's efforts to reduce the adverse effects of poverty on the poor i.e., Benazir Income Support Programme; Waseela-e-Haq; Pakistan Bait-ul-Mal; Initiatives in Microfinance; Microfinance Credit Guarantee Facility; Institutional Strengthening Fund and Improving Access to Financial Services (GoP, 2011). Table 2 shows the budgetary poverty related expenditures of Pakistan from 2007 to 2011. Carvalho and White (1996) opine that foreign inflows can affect poverty directly or indirectly. The direct impact comes from the increase in household income while the indirect effect comes from the spillovers of different income generating activities directly affected by foreign inflows. The foregoing discussion confirms a strong linkage between FDI and poverty; however, the results are mixed i.e., whether FDI inflows increase poverty or reduce poverty (Ali and Nishat, 2010, Khan and Kim, 1999, Shahbaz and Aamir, 2008 and Klein et al., 2001). This study intends to determine the correlation between FDI, poverty and inequality in the social context of Pakistan. Time series analysis on poverty measures from different Household Income and Expenditure Surveys/Pakistan Integrated Household Survey is taken for analysis, by selecting survey from 1985 to 2011. In the previous studies on Pakistan, with the exception of Amjad and Kemal (1997), investigators have dealt with the data for very limited time period and have used different poverty lines. In order to achieve the desired objectives; this study uses the multiple regression method and subsequently estimates elasticities for analyzing pro-poor investment index. Pro-poor investment index is calculated on this data set, as proposed by Kakwani and Pernia (2000) and Kakwani and Son (2004). The more specific objectives are: • To analyze progressive changes in poverty and FDI in Pakistan, • To assess the magnitude of investment flows and its benefits extended to poor, • To establish pro-poor growth index as a reference to foreign direct investment. The study hypothesized that as the foreign direct investment increases; the rate of poverty decreases and it benefits the poor proportionally more than the non-poor. Although, investment is necessary but it is not sufficient to make any significant dent to poverty (Zaman et al., 2010b). This concept is to be tested in Pakistan's social context. The paper is organized as follows: after the introduction which is provided in Section 1, literature review is carried out in Section 2. Methodological framework is explained in Section 3. The estimation and interpretation of results is mentioned in Section 4. Section 5 concludes the paper.

This study attempts to assess the impact of FDI on poverty reduction. Previous research has suggested that FDI plays a key role in GDP growth by increasing capital formation, improving productivity, and fomenting technical change, however, some studies have also argued to the contrary (Bosworth et al., 1999 and Kawai, 1994). The regression results reveal that if there is one percent increase in FDI, poverty is likely to reduce by 0.47% at urban, 0.44% at rural and 0.46% at national levels respectively. Income inequality increases poverty by 0.61%; 0.72% and 0.59% at rural, urban and overall Pakistan respectively. The result concludes that an intensity of income inequality in rising poverty is more than the FDI contribution to decrease poverty at urban, rural and overall Pakistan levels. These results provoke that FDI's positive impact is not sufficient enough to conclude that investment is pro-poor in Pakistan, i.e., FDI may not trickle down to the poor in the context of Pakistan. Similar results have appeared when analyzing pro-poor investment index in Pakistan. Pro-poor investment index (PPII) and poverty equivalent investment rate (PEIR) are taken which encompass the magnitude of investment as well as the benefits passed on to the poor, in terms of investment. Cumulative effect for twenty six years (1985–2011) is considered as anti-poor in Pakistan, which shows that investment does not trickle down to the poor. For FDI to be a significant contributor to economic growth in Pakistan, government should focus upon improving physical infrastructure, and quality of human resources (Zaman et al., 2012b). Keeping in view, the goal of poverty reduction, Pakistan government should adopt a mixture of investment enhancing and direct poverty alleviation policies. The finding suggests that the government should focus on poverty equivalent investment rate (PEIR) rather than the actual rate of investment flows. In order to improve PEIR, the poverty alleviation policy must be in tandem with rational income distribution. There is a need to target public sector development expenditures to particular regions which have high incidence of poverty. Thus checking vulnerability would offer wide option for the policy makers to settle the issue of the severity of poverty in the future. The future research in this area may be conducted, with reference to education and services to the poor.